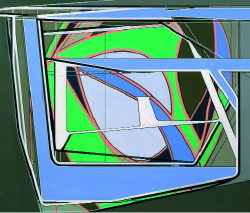 This exhibition of Frank Nitsche's work was made up of four large canvases and two small line drawings: self-assured, compositionally complex abstractions, but clearly articulated in a palette limited mostly to a narrow range of greys and pinks. Nitsche builds a dizzying geometry from vectors and strips of colour that intersect and fold over each other at varying angles, alternately overlapping and slipping behind their crossing tangents. They span the canvas, holding it taut and bringing to mind 3-D visualizations of High-Tech architecture. Coloured segments with thick black outlines suggest the purposeful irregularity of moulded plastic components or the little polystyrene shapes used as packing materials - forms conceived for the production line but with no counterpart in the natural world. Two small untitled drawings (all work 2004) of twisted maquettes were boldly drawn, though half-erased contours suggest earlier incarnations. Nitsche's earlier paintings are more like these drawings, with tight nodes of contorted activity presented like objects, suspended centrally within fields of flat colour, but in his new works the action spreads out towards the edges of the canvas. Like cropped-off close-ups shot from vertiginous angles, they employ telescoping perspectives to plumb the canvas' illusionary depths while criss-cross frame-works collapse and expand, pushing beyond the painting's frame. It is hard to maintain a detached viewpoint as they compel and disorient with their multi-layered strata.

These works are densely allusive, suggesting the curved forms and sleek structures of countless contemporary designs - laptops, mobile phones, trainers, windscreens, inter-city trains, escalators - which are imprinted on your mind like subliminal images as you study the paintings' surfaces. But no single referent sticks as the shapes seem to rotate on elliptical axes, with one association replacing another. Do any of these objects actually exist buried beneath the finished surface? Nitsche is open about the source of his paintings: an extensive archive of images cut out and collected from magazines and newspapers, but as this archive is never exhibited alongside the paintings, their specific origins remain purely speculative. The reportage and reproduction that provide the starting point for each work are systematically concealed by a concentrated process of reworking and over-painting. Tantalizing ridges built up of layers of paint remain, as do occasional sanded-down patches, which reveal glimpses of the paintings' previous stages, both of them providing a surface texture calculated to hint at secret origins or clandestine histories. Even the paintings' titles, code-like combinations of letters and numbers indicating the year, for example GGB-05-2004, play a part in this system of obscured referents and hidden meanings. Hanging here in the Galerie Hetzler on a half-renovated street in what used to be East Berlin, just a stone's throw from Checkpoint Charlie, the paintings emanate an atmosphere of secrecy and conspiracy, while their high-tensile surfaces riff on the phenomenon of the nearby Potsdamer Platz, whose impressive feats of architectural engineering are rather hasty attempts to conceal a politically embarrassing and culturally turbulent past.

Nitsche grew up in Dresden, a once splendid city that was devastated during World War II and then patched up by the GDR government, who filled the holes in its cityscape with examples of utilitarian architecture. He was studying at the academy in Dresden together with fellow painters Thomas Scheibitz and Eberhard Havekost (with whom he is still often linked) when the wall came down. Having lived in Berlin since the early 1990s, he has witnessed every stage of the city's architectural facelift, and this sense of accelerated transformation feeds into his work. If the abstract paintings of Sarah Morris present the certainties of corporate American architecture - with their legible perspectives and clear structures of grids and diagonals, all rendered in glossy, bright, unequivocal colours - Nitsche's work seems to encompass a more murky and convoluted history. Chinks in their superficial structures hint at other partially obliterated systems, or parallel possibilities.

Nitsche's works spin webs of contradictions. The futuristic cityscapes they suggest are mapped out meticulously and gradually in oil paint, a medium whose nuanced tones and slowly built-up, velvet density are the very antithesis of the slickness and speed his aerodynamic forms convey. Though drawing on the rapid image-shuffling of the high-velocity information age and the sophisticated graphic possibilities offered by computer software, Nitsche anchors his works with the steady, real-time human activities of snipping pictures from the printed page and rearticulating them with paint on canvas. The exhibition's teasing title, 'Die Unvereinbarkeit von Newtons Gravitationstheorie und der speziellen Relativitätstheorie' (The Incompatibility of Newton's Theory of Gravitation and the Special Theory of Relativity) points to this state of inherent contradiction. Although his theory of gravity was superseded by Einstein's, Newton is still credited as the creator of modern physics, and the story of the apple falling on his head is still recited in every first physics lesson. Nitsche's exhibition title suggests that contemporary painting's relation to the digital age is as if Newton was still alive and arguing with Einstein.