The Future of Community Festival 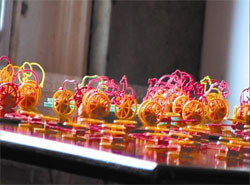 What is the difference between a conference and a festival? On the evidence of this event, it is a spot of musical entertainment between sessions (from the band Papa Mike Tango) and the existence of a few slightly eccentric stalls outside Central Saint Martin’s Southampton Row entrance. Apropos the title of the day, the crowd milling inside the college amounted to a community all of its own, a cohesive society of conference habitués who settled easily in darkened rooms, referred confidently to papers they had given at other such events and took questions from one another on first-name terms. Maybe, for a community of this kind, a conference is the equivalent of a festival. It is certainly a celebration of what they do best.

So what are the common purposes of this conference-going community? Over a day of lectures and discussion, organised by the Future Cities Project, a coherent belief system began to emerge. Speakers shared a broad acceptance that community is a good thing, particularly when you are young, old, poor or ill (a view first voiced by Frank Furedi), except when it encompasses your mother-in-law (shame on you Jules Lubbock for the Bernard Manning moment). Contributors from both the stage and the floor could not be emphatic enough in the insistence that legislation cannot create or promote communities and there was a prevailing faith in Richard Sennett’s notion of ‘disorder’, a theory that good communities are those that emerge in a spontaneous, unregulated fashion and have ambiguous edges. Similarly there was a widespread scepticism about the idea of designing communities, a suspicion that building pretty houses around pleasant communal spaces does not encourage social interaction. And lastly there was a noisy, libertarian consensus in favour of building on greenbelts, smoking in public spaces and withdrawing the congestion charge (a daily charge of £8 to drive a car in Central London during working hours).

By six in the evening the self-congratulatory iconoclasm of this last set of convictions, particularly when voiced by the confrontational forecaster James Woudhuysen, was wearing slightly thin. Of course these regulations should not go unquestioned, but just how proud of yourself do you need to feel for challenging them? Thankfully, as many people pointed out that day, we all belong to multiple communities. As evening fell, I detached myself from the crowd, and with a sigh of relief went home to a rejoin other, less excitable social groups.