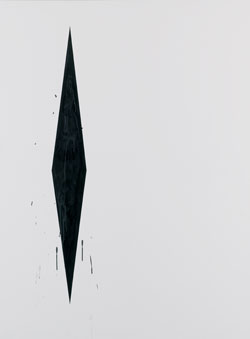 In order to enter Gardar Eide Einarsson’s exhibition, ‘Tokyo Underworld’, someone had to buzz me through an iron gate that looked as though it belonged to a business with doubtful legal status somewhere in a dodgy section of a major metropolis. Compared to Einarsson’s usually rather restrained, neutral-hued sculptures and wall pieces, this performative rite of passage came as a bit of a surprise. That said, he has referred to previous works as ‘a new take on Minimalism’, in which he seeks to investigate our bodily relations to the art work. And viewed from that perspective, the buzz of the entry gate could be seen as a nod to the theatricality of Minimalism and the durational relationship it establishes between object and viewer.

As the title suggests, this show, like Einarsson’s previous exhibition, ‘Start to Enter’, held in the same gallery in 2004, took its theme from the criminal underground. In ‘Start to Enter’ the visitors had to decipher a series of hints and references embedded in the work – the puns and word games that the American outlaw community used when referring to legal issues – in order to make sense of it. When leaving the show, despite the long interpretive uphill battle, I carried with me that slightly perverted sense of pleasure one gets from having trespassed another community’s private turf. I hoped that ‘Tokyo Underworld’ would demand a similar effort.

Things on the other side of the gate, inside the gallery, looked peaceful: ten paintings in acrylic of 160 x 120 cm hung on the walls, each featuring a black rhombus placed off-centre toward the left side of the canvas on a white background. At first glance the paintings seemed identical, but on closer inspection it became apparent that each one had a distinctive black stain around the rhombus. The stains were far too obvious to have been products of pure mistake or misfortune. And indeed, similar marks have appeared in Einarsson’s previous works, perhaps functioning as a symbol for the arcane language of artistic production and reception. In this case, the stains were so deliberate that it seemed as though Einarsson’s ‘accidental’ drips of paint were meant to imitate the techniques of Abstract Expressionism. Given the title of the show, perhaps the artist was trying to draw a comparison between the subcultural language of the art world and the Tokyo underworld: both groups consist of relatively closed communities made up of active and informed associates who take a certain pride in their belonging.

In a room partly occupied as an office space hung an additional segment of the installation: a black hood made from the leg of a pair of sweatpants with two eyeholes cut into it. It was framed behind glass and hung on the wall like a picture. The erased features of a face hidden behind the hood suggested the anonymity of criminal activity. Enclosed behind the barred iron gate, I was left with blanks and emptiness to be filled. I had reached the end of my interpretive road in this theatrically minimalist setting.

Naturally, I could have picked up the press release earlier, but in so doing I would have bypassed the process staged by Einarsson. The text described the paintings as being ‘titled after each of the ten chapters from the book Tokyo Underworld by Robert Whiting, a gripping account of American Nick Zappetti’s life as a self-declared mafia boss in Tokyo’, and the rhombuses were replicas of the identical graphic chapter headings in the actual publication. Learning that the rhombuses were just graphic symbols meant to be placed beside one of the ten headings in the book – Prologue, The First Black Market, Occupation Hangover, etc – directed my interest more towards the signs’ arbitrary status than tales about Japanese mobsters – any other book divided into ten chapters would have served just as well. The artists’ stains nevertheless distinguished his hand-painted signs from the book’s graphic design.

In a pleasant sort of a way, I felt I’d been had: Einarsson had presented me with a series of blanks and then, having let me familiarize myself with them, disturbed my associations by quashing them with an ‘official scenario’. Yet, as I passed back out through the iron gate, I felt I took with me a heightened, if hard to define, understanding of the way things carry meaning.