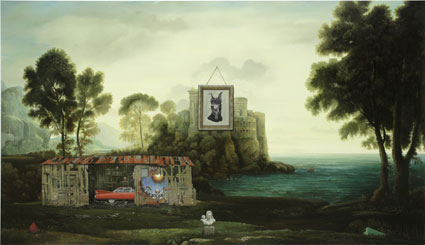 Comprising 14 new paintings in oil on canvas, all of which are dense with horror, mystery and visual luxuriance, ‘My Great Unhappiness Gives Me a Right to Your Benevolence’ is an exhibition that works firstly – and to stunning effect – in terms of sheer spectacle. That this spectacle is, in fact, a voluptuous, sinister, mischievous, intellectual and, above all, ruthless cosmography is also instantly and persuasively apparent. Disquietude and malevolence stalk Ged Quinn’s vast, pseudo-Classical Arcadian and romantic landscapes (many of which are based on those of Claude Lorrain) with an energetic resonance that is as insistent as it is simultaneously insidious and overt.

One experience of Quinn’s recent paintings might be determinedly etymological in approach, resolving a visual code drawn from both the history of art and the arcana of subcultural myth. Within such an attitude the viewer can revel in the sheer narrative brilliance and technical accomplishment of the paintings: identifying, for example, that the lowering portent of The Lone Ranger (all works 2007) – in which an angelically winged outhouse, one side deep in ash like scree, appears to hover above a desolate and beruined wintry landscape – is based (as the gallery notes explain) on the work of the Dutch Baroque-era painter Jacob van Ruisdael crossed with Robert Smithson’s Partially Buried Woodshed of 1970. Or that his The Great Art of Light and Shadow again takes a work by Ruisdael (The Jewish Cemetery, c.1679) as the host for a depiction of the Stammheim cell where German terrorist leader Andreas Baader was ‘found dead’ in 1977.
Such bravura layering of quotation, motif and symbol makes on one level a chilling parlour game of the exhibition’s almost sentient, cumulative confluence of images. The viewer cannot help but shudder, for example, on examining more closely the interior reflected in the vase in Quinn’s demonic usurping of 17th-century Dutch flower painting (punkishly titled No One Here Has Heard of You), to see the terrifying ‘levitation’ scene from William Friedkin’s iconic horror film The Exorcist (1973). Similarly deft is the sudden visual quotation, in the detail of The Limitations of Narcissism, from Rick Griffin’s cover art for the Grateful Dead’s third album, Aoxomoxoa, released in 1969.

The intellectual neatness of merely resolving the cultural etymology of Quinn’s densely packed paintings, however, seems to do a disservice to the epic and deeply affecting extent of their political, moral and imaginative power. Intense romanticism, historically, has often sleeved political and theological commentary within its seemingly self-absorbed rapture. Such tension is encoded deep within the imagistic theatre of Quinn’s painting and may be seen as the ideological and aesthetic basis of this entire exhibition – beginning with the declamatory outburst of the show’s title. ‘My Great Unhappiness Gives Me a Right to Your Benevolence’ is a line borrowed from Jacques-Louis David’s quotation (in his painting The Death of Marat, 1793), from Charlotte Corday’s letter to the French revolutionary, whom she stabbed to death in his bath. It is a statement of exuberant near melodrama but contains at its core the mechanism of a deceptively subtle moral contract, in which the roles of victor and victim become, if not reversed, then at least ambiguous.

The longer one spends with Quinn’s recent works, the more one absorbs the simultaneously mesmeric and appalling barbarism of the world they appear to depict. This is not a place of leaden Conradian horror, however; rather, it is a godless but densely theological territory in which atrocity and evil are honed and nuanced with as much sly comedy as overt cruelty. (In the foreground of one painting we see a hare, crucified upside down; in another, three delicate winged songbirds, crucified on frail crosses made of knotted twigs.) In The Limitations of Narcissism Quinn depicts God, in a somewhat formal portrait, as a stern, imperious dog, impossibly suspended from the blowsy sky of a classical landscape, in the foreground of which a finned scarlet Cadillac (one of the great signifiers of Pop Americana) is garaged in a derelict shed, its exhaust tubed to the driver’s side-window as though to enable a suicide.

The American Dream, the Ovidian idyll and the Bavarian sublime are all equally forsaken in the world revealed by Quinn’s meticulous rearrangement and desecration of cultural and historical identity. Like H.G. Wells’ Time Traveller – whose gentlemanly machine Quinn depicts, wheel clamped, within the horrific debris depicted in his Here is Not the Place for Nostalgia – it would appear that we are being shown, to quote Wells’ description of his Time Traveller’s first destination, ‘humanity on the wane’. Even the greenish violet light in many of Quinn’s paintings – some poetic state of luminescence that could be either dusk or dawn – becomes in this usage indicative of a cosmic battle lost. ‘The ruddy sunset set me thinking’, writes Wells, ‘of the sunset of mankind.’ For this reason alone, perhaps, one might expect to have a right to benevolence. But Quinn, rightly, cruelly, leaves the pleading unanswered.