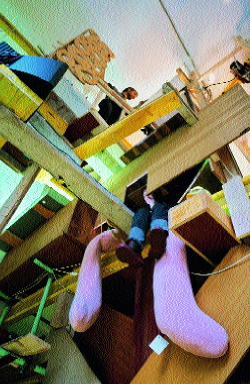 'Get in, come along, experience the ride' - at Buttik Transpørter, a ceiling-high tower built out of junk furniture by the Vienna artists' group Gelatin, such fairground announce-ments wouldn't have sounded out of place. Visitors venturing into the building's interior could lug themselves up and down with the help of three simply constructed, squeaky hoists. Inside the Buttik (a neologism for boutique) was a retrospective of more than five years' worth of co-operative work by the four members of Gelatin, or the 'art-boy-group' as they are often called. Objects included confetti-filled eggs which they had thrown at their audience during a performance in Vienna (Pollo Feliz, 1999); stuffed animals 'preserved' in jars (Operation Lila, 1999); and, not least, the tower itself, which recalled their show at P.S.1 in New York, where they had built a similar structure (Percutaneous Delight, 1998).

Fairs are technologies of escapism that open up a parallel world, which is where the comparison to Gelatin feels appropriate. At one of the largest fairs ever, the Expo 2000 in Hanover, the group took part in the art programme 'In Between', for which they dug a subterranean pit five metres deep, filled it with water and invited people to dive into it. At the end of this flooded cave a Weltwunder (Wonder of the World, 2000) awaited the diver. If you didn't experience it, it's impossible to know what it looked like as the artists asked visitors not to take any pictures or give away the mystery. Without exception, the media co-operated.

If Gelatin's work was a cartoon, it would be one without any words.The group operates in direct contact with their audience, appealing to 'immediate' impressions and feelings. There is no equal exchange with the public; instead, they are sucked into what has been called 'enter-active-art': poetic, anarchic, easy to understand, amusing. With minimal effort (virtuoso works made of junk, handmade costumes) Gelatin build scenarios around small, absurd stories, and show how wild 'fantasy', an often overstrained term, can be. The group is the antithesis of the strict concept-and-discourse school of art, constantly wrestling with its theoretical and aesthetic agendas.

One of Gelatin's qualities is that they continue to place their audience in awkward, sexually ambivalent situations - presenting themselves as a 'boy group', for example, or carrying out a cleaning performance in the nude in an LA apartment, wearing only pumps (Nacktputzen, Naked Cleaning, 1999). For their individual portrait series 'Nudes' (2000) each member of the group posed proudly with a hard-on in Monument Valley and an Alpine pasture. Yet how high are the stakes in Gelatin's work really? Their entire development seems to correspond to tendencies in the late 1990s that favoured anti-intellectual, comforting entertainment - without ever hinting at perspectives beyond these parameters.

There is no real social ambition in Gelatin's feel-good ambience, nothing like Wilhelm Reich's orgasm machine 'Orgon-Akkumulator'. The theme of the (male) body as the site of violence or conflict never comes up, as it does in the work of Vito Acconci or Chris Burden. And those who want to regard the above-mentioned stuffed animals preserved in jars, à la Mike Kelley, as a counterpoint of the educational machine should know that they were originally part of the inventory of a public project for a playroom in a hospital, supposed to help children to lose their fear of hospitals by allowing them to treat stuffed animals. The group cuts many paths leading to interesting terrain, but they never really overstep the borders of lasting irritation. In the end even the invitation to crack open and counteract sexual identity remains an ineffective attitude, trapped in the Gelatin parallel universe.