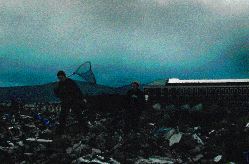 Very little appears to be going on in a Hannah Starkey photograph, and that's precisely the point. Typically, two or three seated or standing subjects slouch in a confined area. The spaces are pretty much anonymous interiors, the sort one finds oneself in between the events of the day - waiting rooms, ordinary cafes, public toilets, empty pubs, or the top deck of a bus. Amongst the nylon upholstery, linoleum flooring, ceiling tiles and formica veneers, are mirrors; mirrors that enlarge the space, multiplying its occupants in reverse and splitting the self.

Starkey's protagonists are mostly women, usually teenagers. It is teenagers, of course, who tend to find themselves stuck in transitional spaces - having the greatest need for, but least means of, escape. Beneath the listlessness and torpor of the girls' expressions lie the loaded rituals of adolescence, registered in the way an individual observes their own reflection, and another, unseen, watches them do so; or in the way a girl stands, as if on a threshold, a few terrifying metres away from a group of her peers slouched on stackable seats. Starkey's scenes of adolescence are far from the wide-eyed hyperactivity - all kicks, crushes and friends forever - that characterises teen-targeted commerce.

Her photographs are mostly entitled 'Untitled', followed by a hyphen and the month and year in which she released the shutter on the particular image in question. This reinforces the mood of inertia: there really is a feeling that the cigarette lighter of the girl in the foreground of Untitled - March 1999 (1999) was aflame for the entire month, and her forearm, its tendons squeezed hollow in the act of igniting it, remained frozen for just as long. But we know this to be impossible, so the dating of the title alerts one to the fact that this interminable moment is in fact constructed and performed by actors.

A recent image, Untitled - January 2000, (2000) is set in a video shop whose interior fittings are utterly banal. The picture is classically composed, looking back at the display window from what is probably the vantage-point of the sales assistant behind the counter. Four girls in their teens stand in two opposite corners of the shop. They each wear ankle length puffa coats - three black, one white - last winter's Hip-Hop-derived look. Each group faces in different directions, their heads slightly bowed. Two are reading the spines of video boxes, one girl has her back to us, while the fourth is in profile, lost in thought, presumably in a trance while waiting for a consensus from the others. She may have a long wait.

Overhead hangs a grid of nine rectangular fluorescent lights set equidistant in a ceiling demarcated by stained and slightly warped polystyrene tiles. The effect is a little like a game board, the girls its pieces, turning on cone-shaped bases. Only a fuchsia strip of neon circling the perimeter of the room hints at the vehicles of glamour and adventure stacked floor-to-ceiling along the side walls. The girl closest to us sports purple highlights, echoing the store's sorry corporate livery. The scene is doubled in the reflection in the glass of the night-time shop window, but only the ceiling lights are reflected clearly. They appear to recede forever like a fleet of Minimalist space ships. The girls, suspended between shop floor and neon reverie, are situated somewhere between space travel and their lift home.

Many of Starkey's most recent images are set outdoors, allowing the artist to pull away from her subjects. Consequently the new environments have taken on a cultural and religious symbolism absent from earlier encounters in more claustrophobic, anonymous urban settings. Untitled - August 1999 (1999) is a riff on a favourite theme: the individual rejected by her peers. The gang of three short-skirted, high-heeled girls is dwarfed by a huge concrete wall that occupies the whole background of the image. The enormous forms of what look like Biblical characters at some kind of altar float behind them. The relationship between the actual and drawn figures suggests some sort of parable, but its meaning is as cryptic as the tags and other graffiti the girl, stared down, walks past.

Lighting plays no less a part in these images than the indoor scenes. Butterfly Catchers (1999) is a dark print. A moody sky signals the end of the day and an imminent, heavy rainstorm. Through a break in the clouds, the sun makes a last effort at illuminating the scene from the top right hand corner of the frame, striking the metal roof of a brick warehouse, notched at one end like a Donald Judd. The rubble of a demolished building in the artist's hometown of Belfast forms a sea of debris, scrawled over by twists and knots of what were once the concrete's steel reinforcing rods, with an occasional piece of blue plastic or aluminium glimmering like the crests of waves. The whole picture is coloured like a dead fish in greys and oily blues. Two teenage girls make their way through this worthless plot of ground: the one in the centre is hunched up with cold, the henna of her hair glowing copper, while her companion holds a large net over her right shoulder as if on patrol. The butterflies of the title aren't apparent in the photograph, so the words function as an absent metaphor. As with so much of Starkey's work, the photograph's narratives are never really legible amongst the ciphers of submerged feeling which the image acts out.