BY Barbara Casavecchia in Reviews | 01 APR 11

B
BY Barbara Casavecchia in Reviews | 01 APR 11 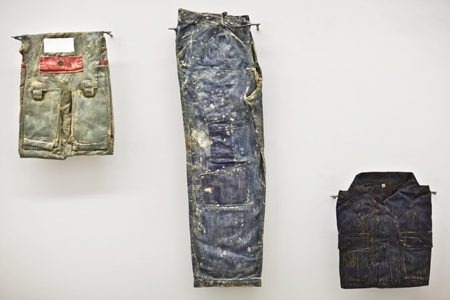 A tiger paces furiously around its cage: the video installation Untitled (2010) which opened Giulia Piscitelli’s exhibition ‘Rischi minori’ (Minor Risks) at the new Fondazione Giuliani (curated by Stefano Chiodi) suggests a self-portrait of the artist as an alienated animal. Shot in the Naples Zoo, a place Piscitelli regularly visits, the video returns to themes from her earlier work: the Italian artist has pictured herself wearing a tiger mask in Tigre in Italsider (Tiger in Italsider) and Tigre in Gaiola (Tiger in Gaiola, both 2002). In conversation Piscitelli has said: ‘I know the story Beauty and the Beast, so I guess my approach is an attempt to look at my inner beast, upset by captivity, but also a way to emphasize how this caged animal never lost his beauty, his light.’

In close proximity to the video hangs a bleach painting depicting a bottle of morphine (Molteni, 2010); the air is filled with the anaesthetic drone of hundreds of slot machines recorded by Piscitelli ten years ago in an American casino (Atlantic City, 2010). The series ‘Rischi minori’ (2010) could be viewed as a study in the alienation of organized labour: it comprises a number of uniforms that Piscitelli coated in latex and hung on metal bars like drying skins. Each one is, in a sense, a kind of portrait – the white dungarees covered in paint belong to the artist, who used them when she was working as a restorer, and the worn vest is her father’s.

The show’s recurring theme is confinement, be it in cages, social systems or the home. Neapolitan Windows (2010) – a group of blocked-off windows – are made from collage and ink on Perspex; Personal Belongings (2010) is an iron weight attached to the leg of an old chair; Line, Do Not Cross (2010) comprises a yellow barricade tape wrapped around a vertical blue iron bed. The threshold between inside and outside – the delicate border between vulnerability and aggression – is where Piscitelli operates: she describes her approach as a ‘ballet’. In an interview with Trevor Rots, Louise Bourgeois once said that ‘violence comes from frustration. Every frustration makes an animal violent. Now, one way or another, we are all frustrated, and frustration and violence are like a pendulum, oscillating back and forth, back and forth […] But after violence comes reparation’. As if reflecting this, one of the strongest pieces in Piscitelli’s show is Little Italy (2010), an installation created from two small neon lights covered in sanitary pads – a technique used by female inmates in jails to soften the atmosphere.

The exhibition also incorporates a selection of older videos, including the powerful Untitled ’95 (1995) – in which Piscitelli sports a long tail which she cuts off and sucks – and a compact group of five works created by the artist in 2009 for her solo show at Galleria Fonti, in Naples. These include the video installation Plessimetro (Pleximeter, 2009) which depicts the blurred profiles of a group of elderly people doing gymnastics (the artist is disguised among them). To the ambient sound of a bouncing ball, they tortuously move up and down. Over and over again Piscitelli moves between irony and empathy in her exploration of life’s Sisyphean tasks.