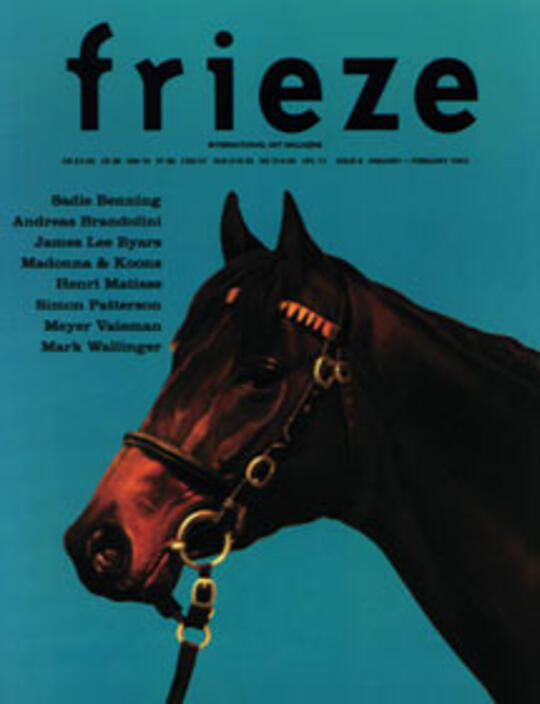 Grenville Davey's sculptures tend to be disguised as something else. Hovering above the ground or, on odd occasions, resting flat, they give out gently, like a collar or a flange. In Davey's work these sculptures become the industrial equivalent of Greek pediments. Another possibility exists: that the form itself may take centre-stage, as in the leaning, circular 'medallions', where it becomes a rim.

Categorisation, tilting and family resemblance seem to fascinate Davey. So does the necessity for naming and the difference between what things are called and what they are. At the points at which identity starts and stops, edges and surfaces assume particular importance. Take the identical circular rims in a sculpture called Grader (1992) for example, one a base, the other at the end of a sieve, the latter tilted towards us, as if on display. The sieve itself turns out to be one circle of flat, metal mesh, placed at an angle above another, exactly the same curvilinear pattern forming circles when the overlay takes effect, but flat and distorted when light casts shadows on the wall behind. It is a kind of eye, of course, and the title implies that looking is never unprejudiced, that istead of merely sorting, it 'downgrades' or 'upgrades'. There may even be a moral connotation, for it may also 'degrade'. Yet no sooner is this inferred than this inference is dispelled. For despite looking and sounding like a 'grater', the 'grader' is in no danger of mangling the evidence. And to demonstrate as much, the mesh of the sieve has acquired a light coating of salt, an addition which calls to mind a number of associations. What of the salt, for example? Honest and plentiful, as well as necessary, salt is so abundant that it rebuffs attempts at differentiation, in particular the gesture called to mind here: of panning for gold. You might as well try capturing the sea. And if you did, this is what would be left. If it is an observatory, as its Arabic associations imply, it reveals a firmament of stars.

Visual overlay occurs elsewhere in the recent work, notably in two framed sheets of thick, vertically fluted glass, backed by mirrors, apparently making the windowless gallery lighter and less claustrophobic but in fact reflecting the viewer in an expanded, unrecognisable form. CAPITAL 1992 does something similar to the shape of the earlier (gold) Table 1991, a butcher's block with a parquet top which recalls gold leaf, bounded by the regulation rim at top and bottom. An equally instricate game connects Sharp 1992 as in the expression 'Look sharp!!', meaning 'Keep your wits about you', and 1/3 Eye 1991 a play on the Buddhist 'third eye' made to match an oversized medallion form with a bisecting lip one third of the way across. Sharp also involves bisection, with shadows making conceits about what is incomplete and what merely broken. An eyeball shape suggested in outline form on the wall, has been penetrated by what looks like an piece of oversized pasta, with the result that half of it has dropped onto the floor and now rocks on its two, curved, identical elements. Three-dimensional extrapolation would result in a shape like one quarter of a Gouda cheese. Now that only two rockers exist, the shadows they cast sketch out the third dimension. It is a heart. Another is fixed to the wall. Hearts can be broken with a glance it is true, and a piece of metal at 45 degrees to the wall and floor provides all the clues we need to establish the result; it is the colour of blood.

The fragmentation which typifies the current stage of Davey's work has overtones of virtuosity, of an exercise that may become a tiresome game with rules whichhave too little bearing on the world outside the gallery, indeed outside Davey's mind. We could even see it as a parody or critique of philosophical practice. And there is no doubt that it is English to the core in its cross-fertilisation of visual and verbal, as well as its social overtones. What is learned from Jonathan Watkins selection and Michael Archer's thoughtful catalogue is the sheer scope of the exercise and its potential for 'spoiling' classic Modernism, not in a spirit of satire but as a means of carrying on and relating it to ourselves and our lives.