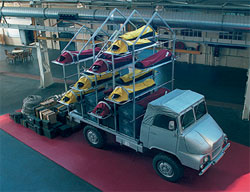 Although the centre of Gwangju resembles a giant duty-free shop, the title of the city’s biennale, ‘A Grain of Dust A Drop of Water’, had a more cerebral theme. In an attempt to make it as ‘accessible’ as possible, the curators, Kerry Brougher and Suk-won Chang, under the overall direction of Yongwoo Lee, invited 60 ‘non-artists’ to Gwangju to decide which artists should be included.
Although the proliferation of curating courses worldwide has engendered some innovative curatorial practice, it has also produced some strained and over-thematized projects. But Gwangju is hardly the most convenient two-day jaunt for the art world, so the curators had little choice other than to involve a more general audience in the selection process. An even-handed selection of ‘viewer–participants’ to fulfil the egalitarian desires of the organizers, however, was