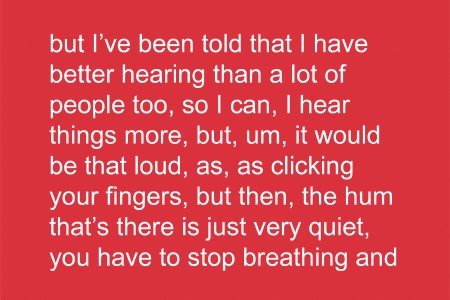 In 2007 the British artist Hannah Rickards travelled to Alaska to interview people who claimed they had heard the aurora borealis, the coloured swathes of light made by charged particles in the polar atmosphere. Rickards’ work has dealt in the past with such transformations between categories of perception and representation – between the visual and the audible, for example, or the natural and the artificial – and the project that developed from this (… a legend, it sounds like a legend …, 2007) became an extraordinary process of reduction that recalls 1970s’ Conceptualism.

Rickards, who was awarded the 2008 MaxMara Art Prize for Women, displayed three transcripts from her Alaskan interviews on monitors of red, green and blue in a solo show last year at The Showroom gallery in London, while recorded voices spoke the texts out loud. Rather than the drama and the mystification of the aurora borealis, the installation effected a precise visual mapping of the gallery space, with each corner determined by the constituent colours of a cathode ray, and thus the process of electrification of particles that results in both the Northern Lights and television images.

The tone of Rickards’ work differed markedly from the testimonies of those who claimed they had heard the light phenomenon. The subjects are enthralled with their encounter, or are on the defensive, constantly seeking to shore up their stories by relating their experience to something else: the sound was like ‘scratching’ or ‘a harp’, or ‘a sustained hum, like, um, like a lightsabre, you know, from Star Wars’, ‘a sheet of music’ or a Las Vegas hotel where ‘they do this symphony of lights where they have different, um, coloured lights, um, move to music’. One of the testimonies gave Rickards the (lengthy) full title of the show:

The sound I think it makes is, is that whispering sound, to me it sounds, it almost sounds, um, uh, what’s the word I’m thinking? Um, like historic, not historic, but, um, oh: a legend, it, it sounds like a legend, you know, when you think of a legend or something way back in the past you get that, that, it sounds like that to me, like this legend or somebody’s, this whispering sound: it’s a legend.

The literary theorist W.J.T. Mitchell, in discussing ekphrasis – the verbal representation of a visual representation, such as a painting, a tapestry or a shield – calls this moment (the transformations between light and sound, or stillness and motion, or other seemingly immutable categories) one of ekphrastic hope, when one is led to believe in the Utopian possibility of overcoming the divide between image and text.
Rickards, in her diagrammatic installations, seems to doubly deny these opportunities for the sublime: she effects twin processes of removal, displacing the original subject of beauty (the aurora borealis, for example) and focusing on the process of transformation to the extent that the original referent – what’s being transformed – is in danger of being lost or wholly altered, rather than being elevated to a point of potential transcendence.

In Thunder (2007) Rickards recorded the sound of thunder and mimicked its sound in a score for six instruments. She first stretched the sound of a single thunderclap from eight seconds to seven minutes, and had the composer David Murphy create a score of the sound, which was then recorded and reduced to eight seconds – back to the length of the original thunderclap. The recording of the transcribed thunder in the gallery, accompanied by four typewritten sentences that described the process of expansion and compression, formed the final installation.

In the same way that the subjects’ descriptions of the aurora borealis were articulated by constant comparison to some known experience – one which was notably excluded in Rickards’ diagrammatic installation – the question of a referent is again at stake here. Thunder’s use of transcription, or the copying of a sound, is alien or at least runs counter to the idea of music’s non-referentiality, an idea that has repeatedly been contested. Ludwig van Beethoven, for example, sought to imitate bird-song (Symphony No. 6, 1808), while John Cage attempted to close the gap between artifice and reality by playing a recording of bird-song heard in the park in a performance onstage (Bird Cage, 1972). In her own work in this vein, Birdsong (2002), Rickards recorded bird-song, altered the pitch so that it was one her voice could reach and recorded herself imitating the sounds of the birds. She then compressed the songs back to their original length and pitch. The presentation was similar to that of Thunder: a typewritten description of the process and a recording of the altered song. To place Rickards between two very eminent poles – Beethoven’s aim of imitation and Cage’s of immediacy – Birdsong and Thunder investigate the extent to which referentiality adheres to transcription, or at what point a process of transformation becomes its own thing, existing without recourse to anything else.