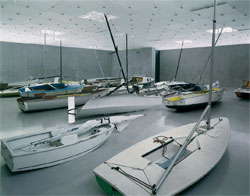 The Kunsthaus is swamped. Not with visitors, who trickle in, but with seepage from the vast Lake Constance nearby. Groundwater pumped up from the lowest part of the building has covered the entire street-level gallery (Cosmos and Demos, all works 2004). The usual entrance is closed off and strewn with mops and buckets, as if in mid-salvage. Instead a spruce ramp (You have cum in your hair and your dick is hanging out, a title taken from Will Oldham’s song of the same name) gives temporary access via the goods elevator and, once inside, leads down to an elegantly inky flood, contained by the black rubber membrane and ranks of sandbags lining the floor. Encountered by negotiating duckboards and tiptoeing between puddles to the stranded ticket desk, Hans Schabus’ watery overture to his exhibition ‘Das Rendezvousproblem’ (The Rendezvous Problem) set in motion a see-saw of displacements and inversions that flowed throughout architect Peter Zumthor’s stack of formidable concrete galleries. Reflecting not only the entrance space’s pendulous lamps but also a flood that happened in the spring of 1999, when sandbags were deployed more conventionally on the outside of the building, Schabus’ ambient water followed a soggy precedent of exhibitions at this venue that, like Olafur Eliasson’s ‘The Mediated Motion’ (2001), unfolded in a parcours of occasionally quite literally immersive installations. With a work titled Song of Most, Song of All, the following floor was filled not with water but with vessels designed to displace it. Twenty or so functioning craft – yachts, dinghies, sculls, launches, pedal boats, kayaks, John the Baptist, and Schabus’ own Forlorn among them – were marooned in this uncanny dry-dock showroom, all oriented expectantly in the direction of the neighbouring lake.
Requisitioning the building to an even greater degree, the walls of the second floor became screens for a wraparound six-projector video installation that portrayed the show’s narrative core through a train journey (High, Low and in Between – a title this time borrowed from Townes van Zandt). The exhibition’s opening day coincided with the 121st anniversary of the completion of the 10-kilometre Arlberg tunnel, a marvel of alpine engineering that skewers the Lechtal range to link the remote far west of Austria, where Bregenz is situated, with the rest of the country, notably Schabus’ home city of Vienna. Enmeshed in a fantasy in which the basement of the Kunsthaus became a rail terminus for an indulgently long 52 km extension to the tunnel, the video installation crystallized around the artist’s train journeys to Bregenz while carrying out research for the show and a proto-sci-fi story by Swiss author Friedrich Dürrenmatt. Tunnelling became not merely a matter of technical prowess but a latent gesture of monumental sculptural removal. Accompanied by technical drawings printed in the catalogue, related video works tucked in a corner, a wooden model on the lower ground floor and a knock-on proposal to dump the waste from the excavation in a 100-metre-high pile on top of Bregenz railway station, Schabus’ hare-brained scheme – like Martin Kippenberger’s similarly grand Metro-Net project (1993–97) – was nothing if not ambitious. Multi-viewpoint shots of a bustling dining car and sections of receding track cut to a view of a bridge in which the projectors joined together to produce one panoramic sequence showing the rushing locomotive. Perhaps best explained in terms of the temporal discontinuity usually experienced by those abducted by aliens, the journey through Schabus’ extended tunnel had to be rendered as no more than a temporal hiccup, as in the following sequence the protagonist seen earlier on the train (the artist himself) soon appeared wandering through the basement of the Kunsthaus. His ensuing ascent in the lift momentarily overlapped with that of the gallery, as the wall-filling footage of passing shaft walls and complementary growls gave the impression that the entire floor was moving as well, before the final sequence revealed a vertiginous vista of the city and Lake Constance, shot from the roof of the building.
‘Das Rendezvousproblem’ took its title from the difficulty that converging teams of tunnellers face in trying to meet somewhere in the middle of the mountain. Engineers resolve such difficulties by effectively enlarging their target through something known as a ‘safety loop’. Schabus’ exhibition wagered on a similarly uncertain convergence, though here it was an imaginary excavation and the physical reality of the exhibition experience that had to converge. Clad in forklift pallets and raised off the ground with crates, the blindingly white room-within-a-room that topped off the exhibition somehow functioned as a depressurized ‘safety loop’ device (There is no-one what will take care of you). White cubes are to art what black holes are to astrophysics: both phenomena can apparently absorb and give rise to unlimited amounts of conjecture at the same time; Yves Klein knew this just as well as Stephen Hawking. The lacustrine flood, the stranded boats and the fantastic tunnel were both full and empty gestures, and Schabus’ white chamber finale was the most brilliant fudge.