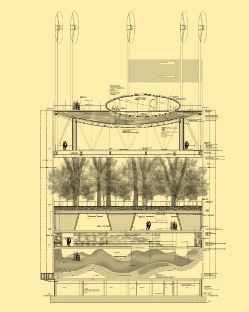 In 1909, Life magazine published a cartoon portraying a sleek, 84 storey steel structure open to the elements. On each airy floor of this utopian skyscraper in Manhattan stands a villa surrounded by a country garden and open land. Flocks of birds and double-decker aeroplanes fly right through the building; cottonwool clouds waft over the floors, modestly veiling the spartan steel beams; fountains splash between cypress trees; and an elevator transports the inhabitants up and down.

For the upper echelons of Manhattan at that time, skyscraper living was not exactly the most desirable mode of existence. A Palladian country house or an Art Nouveau villa was vastly more preferable. The 84 storey subsistence machine in the Life cartoon offered an extravagant solution to conflicting desires to flee the city yet remain in touch with its energy, and united both in a paradoxical image. The stacked villas were years ahead of Le Corbusier's idea of the Ville Contemporaine (1922), upon whose roofs flourished green lawns and abundant verdure.

Ninety one years on, the Dutch pavilion at the Expo 2000 in Hanover has made the vision of the Life cartoonist a reality. The idea that nature can be manufactured out of thin air on any given floor of a skyscraper - seen in the bonsai cultivations inhabiting Norman Foster's grey, high-tech sky lobbies in Frankfurt, for example - has so far achieved only a laughable degree of success. MVRDV's Dutch pavilion, on the other hand, suggests the idea of a second, artificially generated nature, that could, potentially, be endlessly reproduced.

Perhaps earthly happiness is not to be found on the earth, but instead somewhere high in the stratosphere. At any rate, Winy Maas, Jacob van Rijs, and Nathalie de Vries (MVRDV) have come to this conclusion in the face of Holland's extreme population density. What MVRDV have built in Hanover is not architecture, but a concentrated landscape in a six-pack: a world standing on its head. The foundations are a dunescape; 13 massive oak trunks carry the weight of several floors; and, on the roof, wind turbines extend out of a lake and into the air.

This organic layer cake knows nothing of façades: all levels are open to the weather. Take the elevator to the top, go past the wind-energy park and the pond filled with reeds, and you will see collected rainwater running off the roof and arcing out into an eight-metre high curtain flowing over the entire pavilion. If you take the outside stairs instead of the lift, the wall of water is right beside you - if you're unlucky, you will get drenched by a gust of wind. On the next floor down, you're suddenly floating in a forest of leaves, twelve metres high. The 'roots' on the floor below make the trees appear to be standing in several enormous geranium pots, but actually the hanging root buckets are empty. Finally, there are geranium and tulip fields, and the 'dune' floor, which is, of course, not made of sand, but sprayed concrete.

All in all, the entire structure is nothing more than an abstraction: the manifestation of an idea that is still under construction; a daring laboratory experiment, still in the development stage, which has been dragged prematurely into the public eye. In this sense, the MVRDV creation distinguishes itself from the perfect boredom of the countless presentation videos which adorn most of the Expo's national pavilions and theme park halls. The Dutch pavilion is an astonishing exception in this over-ambitious exhibition, which hit town as an oily mixture of tourist mart, high-tech flea market, and open-air worship. But in the midst of all this is an idea that could go in unexpected directions.

The pavilion was dreamt up in Rotterdam, where MVRDV work in a rather shabby glass box, a former trade office located on the largest interior harbour in the world, surrounded by stacks of millions of containers. Here, they pile up not just miniature landscapes, but also their visionary models. One cardboard model has deep ravines running under the streets of Amsterdam; the canals, in contrast, appear to be ridiculously flat. It looks rather like something out of Fritz Lang's Metropolis (1926): a new Amsterdam with living spaces below sea level - a proposal from MVRDV, commissioned by the Kingdom of Holland. Equally utopian is the proposed construction above Rotterdam: a gigantic superstructure made of motorways, train lines, and scaffolding; a radical, metaphoric intensification of the port city that restlessly rebuilt itself after the war. MVRDV call their visions of the city 'Lite Urbanism'.

The projects constructed by the Rotterdam trio appear hardly less daring than their theoretical models. The headquarters of the private Dutch radio station VPRO in Hilversum, for example, is a winding, endless succession of stairs, ramps, bridges, patios, halls, and several floors. It unites the elegance of Le Corbusier's white Modernist incunabulum, Villa Savoye (1929), with the power of Piranesi's architectural fantasies and the carefree nonchalance of Rem Koolhaas. Koolhaas designs spatial continua (incorporating entire cities, such as the artificial metropolis Eurolille, 1994) and has no interest in details. Ultimately, his work is about the big picture. The VPRO building doesn't have any walls - who cares? Glass skins of various colours suffice as ersatz façades. Light shines through into the depths of the compact block, and from every location you can see the guts of the entire, wonderful, spatial construction.

A year ago, MVRDV published the plans for Datatown. It could be seen as a conceptual blueprint for the Dutch pavilion. What would happen, MVRDV asked, if the contemporary city was no longer viewed from a topographical perspective, but instead as a collection of data? All the monuments, the unique architectural creations, and individual points of view would no longer count; all that would matter would be pure information. Accordingly, they portrayed the city as if it were made of political campaign graphics on a background resembling graph paper.

With only 60 million square metres of inhabitable surface available on the globe, the architects concluded that we need to erect gigantic stacking cities in order to survive in the long-term. One of these megalopolises would shelter the entire population of the USA, requiring a city park a million times bigger than Central Park, and, for reasons of space, these green lungs would have to be stacked up over 3884 floors. Over 200 years, Datatown's mountain of garbage would grow to a veritable Mont Blanc.

In the light of Datatown, the Dutch pavilion seems to be a practical model for the reinvention of the world; a utopian formula born of necessity to allow the unlimited creation of new real estate. It might be concluded that the city planners of the future will only create endlessly reproducible platforms, which could be fashioned after each individual's own whims: as a dune park, a leafy forest, or a swimming lake with its own power station. This stacked megalopolis in Minimalist dress would not be exactly what the Life cartoonist imagined in the last century - he still dreamed of bucolic rural scenes and mondaine celebrations with the in-crowd on the 84th floor. But has anyone ever honestly believed that Utopia would be fun to live in?