Helen Marten is an artist who lives and works in London, UK. In 2013 she had solo shows at Chisenhale, London, CCS Bard, New York, and was included in the 55th Venice Biennale and the 12th Lyon Biennale. She will have a solo exhibition at Sadie Coles HQ, London in January 2014. 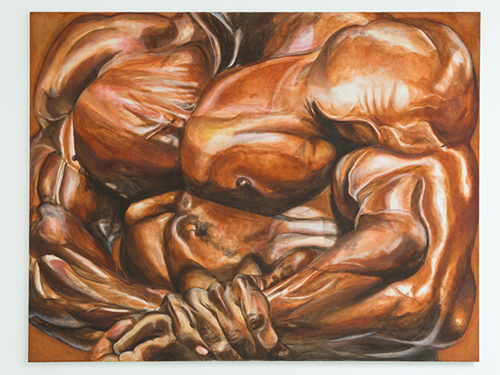 Thomas Lanigan-Schmidt, MoMA PS1, New York
This is work that demands hours: both to look at and to make. Assembled with painstaking deliberation, the surface detail coupled with rampantly appropriated and remixed iconography is astounding. Religious opulence arcs via shiny foils and hanging plastic into glittering homosexual fantasy. Pornography, saints, hilarious audio and tin-foil rats assemble themselves into pockets of installation that resemble tableaus or the staggered antechambers of a cathedral. But despite decorative exuberance, the implements of making are humble: glue, staples, trash, candy wrappers. It’s like Susan Sontag’s Notes on ‘Camp’ (1964) marched oiled and bare-chested into cruciform position, bending over to release a fabulous spray of homespun yet earnestly dedicated eroticism. 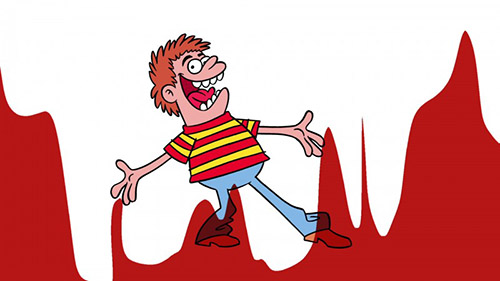 Jordan Wolfson, REDCAT, Los Angeles (on show at Chisenhale, London, until February 2014)
I’d watched Jordan’s Raspberry Poser (2012) in progress sections on my tiny laptop screen before seeing it installed in full at REDCAT. If I’d loved it in fragmented miniature, then sitting there, my chest exploding from the booming vibrations of Beyoncé’s ‘Sweet Dreams’, was nothing short of apocalyptic. This is an amazing work. The elastic inventions of animation warp themselves around human darkness in a rhythmic gravitational swirl that levitates and sags with equal volatility. Sitting there in the most immaculately installed media environment I’ve ever seen, I felt alienated, in love, possessed with jealously, and all accelerated in a confusion of hieroglyphic approximations and linguistic shorthand only just in reach of my grasp. Jordan is a troublemaker and this video is parasitic and obsessive, but wonderfully, perversely, outrageously under the skin. (And it’s great at Chisenhale, too!)

Uri Aran, Kunsthalle Zurich, Switzerland
There is nothing more exciting than travelling to see a friend’s show and being knocked speechless with pleasure upon exploring it. Entering first into the square, semi-blacked-out space of a large-scale video was a formal move approximate to being dunked into a shower booth before entering a giddy laboratory of both graphic and laboriously human touch. The pleasure of the fingertip is so evident here, a place where pouring, cutting, splashing and measuring all collide into beautiful portions of repetition, logic and education. Grapes, varnish, plaster and cardboard have never looked so beautiful!

Manet, ‘Return to Venice’, Palazzo Ducale, Venice
I only had a chance to speed round this, so dashed in search of the asparagus and the masked ball. These two paintings are a gorgeously fleshy explosion of texture and bizarrely skewed proportion. There is the asparagus, languid and swollen with its terrible pinky fluorescence; it could burst or steam or roll over or puddle paint into rot before our eyes. If the title wasn’t so definitive, the asparagus could equally be a penis, a bloodied finger or some other atrocious appendage. I’m fascinated with this painting because its content is so silent, whilst the rainbow magnificence of paint suggests a more displaced vibrancy of animation. Masked ball intrigues for similar reasons. All that black! And the magnificent velvet sheen of the top hats – an enormous seething sea of them – sunk in what I imagine to be the heady din of a ballroom. But, like with the asparagus, expectations of movement and perspective are warped: these figures are curiously static, sound is absorbed, and there is not one body that is singular or fully depicted amidst the wallowing mass of shared blackness. 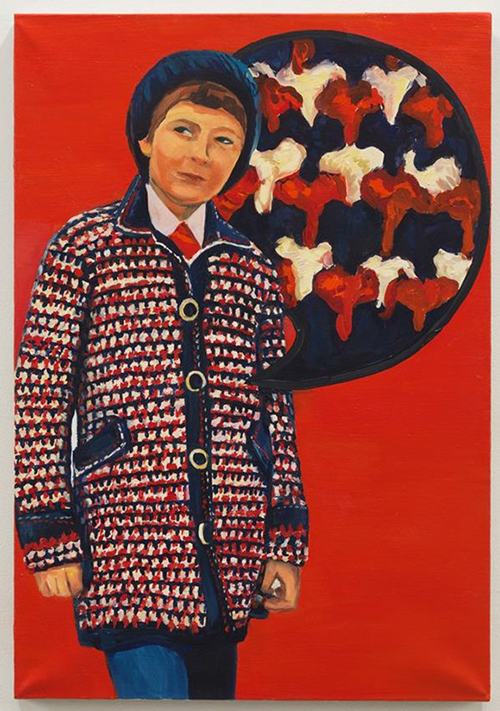 Paulina Olowska, Stedelijk Museum, Amsterdam
A neatly joined, but simultaneously agitated combination with the Malevich survey, this installation was alive with political and personal enigma. Sharing its title – ‘Au Bonheur des Dames’ (‘The Ladies’ Delight’) – with a Zola novel, the exhibition similarly bundles works together in a zig-zagging oscillation between conflict and jubilation. Graffiti, neon and knitwear are theatrical to almost bombastic proportion, but maintain a coquettish honesty that sets just the right tone for alternative viewing of our contemporary worlds of designer ideology.

Jana Euler, Cubitt, London
Jamie Stevens is a brilliantly inventive curator, and Jana Euler’s works turn me rigid with jealousy! These are paintings that are infused with breath: the fouled, steaming-genie kind of breath of an opium den, alongside the fuzzy, minty-fresh aqua mouth of tangled muscles and cold blue water. ‘Under Abstraction’ felt like a shyly but rigorously calculated offering of narrative and optical focus (and un-focus), with each separation of the plastic-sheet-divided installation plotting vectors between a manically off-balance kind of realism. There was the masked and the un-masked, the backs turned and the bodies cropped, but always a set of quiet eyes or geographic coordinates unmistakably, lucidly, present to bear witness. 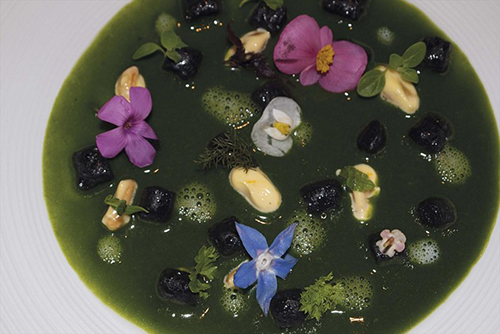 Juergen Teller + Antonio Guida, Eating at the Hotel Il Pellicano (Violette Editions)
When I imagine certain foods, my salivary glands burn with anticipation. In this publication – simultaneously cookbook, ecstatic bible of cuisine and celebratory documentation – my mouth is paralyzed with possibility. The colours are nothing but fabulous, the styling graphically but lightly exquisite and the photography saturated with an erogenous pleasure that is more right in front of you than on the page. I want to eat everything in this book, but there is a vampish baroque impulse that terrifies me too. Froth, broth and mousse have a devilish vibrancy. Things literally sprout, spew and fornicate underneath, between and alongside other things. There is so much here I can’t name with certainty. Food I imagined to be white is here black, eggs are impossibly sexy and meat is more alive than the animal from which it is hewn. One of my favorite images is the Saffron Risotto with Tuna Tartare, an exquisitely fun plate of graphically flirtatious dots on a meaty red bed of sauce. Of course I want to imagine that this is the surrealist outcome of a traffic light popping its dots in close-up over the bloody scene of a car wreck, but I also want to eat it, too. 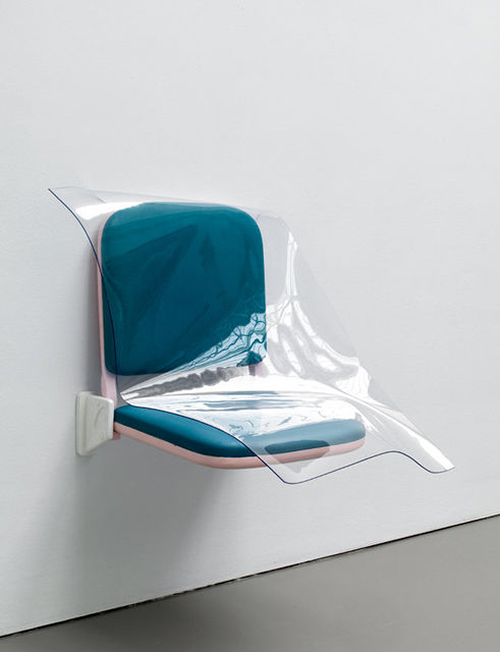 Magali Reus, Fons Welters, Amsterdam
‘Highly Liquid’ was fantastically fraught with tension, with a kind of muscle-fibre confusion that leaves you wondering whether you are sprinting or moving in a jellied haze of slow motion. The detail of both the sculptural works and the video is obsessively sanitized, but animate with an attention to material surface and its way of suggesting a hotness of human presence that is only just beyond visibility. Sculptures painstakingly cast from polyester resin to resemble flip-down chairs hung around the peripheries, coloured with a kind of Japanese graphic elegance both sexy and hermetic in perfectly modular optical rhythm. This was an excellent linguistic anagram of all the things we think we can name with certainty, but here cannot.

George Saunders, Tenth of December: Stories (Bloomsbury)
SO MANY GORGEOUS WORDS! This collection of short stories is mind coagulating. Escape from Spiderhead is a ruthless and hilarious electrocution of the nerves that left me positively jangling with the possibilities of narrative.

Olivetti Showroom designed by Carlo Scarpa, Piazza San Marco, Venice
If contemporary Venice were ever looted, I would head directly here with various pneumatic implements and plunder from floor to ceiling.

And, speculatively, a David Hammons retrospective that I hope might come to London……

Helen Marten is an artist and writer based in London, UK. Forthcoming solo exhibitions include: Stedelijk Museum, Amsterdam, the Netherlands (2018); König Galerie, Berlin, Germany (2018); and Castello di Rivoli, Turin (2019). She is currently working on a novel.