How many enemies will I make if I say that 2014 was not a stellar year for art in Los Angeles? It’s true though. I put it down to a regathering of energies, a time for taking stock and inaugurating fledgling ventures. Many column inches have been lavished on the ongoing explosion of L.A.’s gallery scene but at this point we have less to show for it, in terms of memorable exhibitions, than one might expect. All is promise for 2015, but in 2014 there were relatively few major chords. 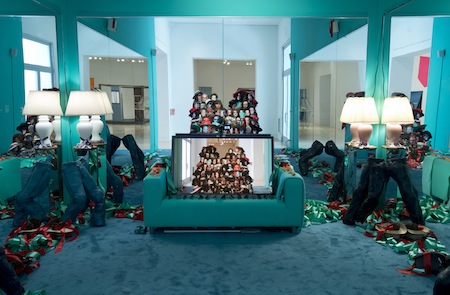 A couple of high notes were museum shows that arrived in Los Angeles after first receiving wide acclaim in Europe: Mike Kelley’s astonishing springtime retrospective at MOCA, a home-coming parade poignantly missing its king, and Pierre Huyghe’s current retrospective at LACMA. Exhibitions like these really drive home how ambitious contemporary art can – and should ¬– be. They raise the bar for everyone.

People often complain about the smallness of the Los Angeles art world. (I think they’re wrong, by the way. Its problem is not size but insularity.) One advantage of the community’s seeming compactness, however, is that it often creates opportunities for repeated viewing of artists’ work. I rarely make my mind up the first time I see something new.

Not coincidentally, several of my highlights from 2014 are artists whose work cropped up twice or more through the year. Samara Golden went from strength to strength in 2014, first with a brilliant, topsy-turvy installation at Night Gallery titled ‘Mass Murder’, then with a keynote piece for the Hammer’s ‘Made in L.A. 2014’ biennial that reportedly depicted everyone she knew in Los Angeles. (A work that did not help the city’s reputation either for smallness or insularity.) Now PS1 MOMA in Queens, New York, is showing the most ambitious installation of her career, The Flat Side of the Knife (2014).

In January, a gust of fresh air blew through Southern California with the inauguration of a new art fair, Paramount Ranch. Largely thanks to the extensive rolodexes of its organizers, gallerists Robbie Fitzpatrick and Alex Freedman and artists Pentti Monkonnen and Liz Craft, some of the world’s smartest young galleries turned up at a wild west movie set, an hour out of town, with suitcases stuffed full of art.

It was at Paramount Ranch that I first encountered the living sculptural environments of Max Hooper Schneider, who showed an anatomical model of a uterus with live newts inside it, blue-lit and spilling mist. Selected by Milan-based curatorial outfit Several Flames, his space (a wooden shack) also contained retro-futuristic airbrush paintings of sexy chrome robots by Hajime Sorayama. Schneider popped up again a few weeks later with a solo exhibition at Gallery 169 in Santa Monica Canyon featuring a suspended whale skeleton cast in home-made phosphorescent resin. In September, he showed some sculptures (one featuring a live Emperor scorpion) in a dystopic group show called ‘Bathymetry’ at Del Vaz Projects, a new space operated out of a west L.A. apartment. A month later, he had a solo show (titled ‘THE POUND’) at Jenny’s, one of the city’s most promising alternative project spaces-cum-commercial galleries. 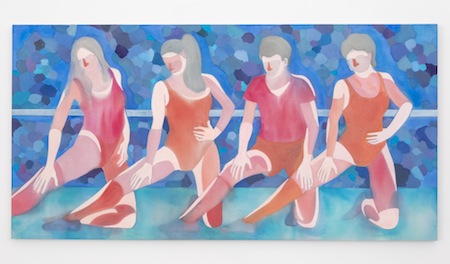 Maslansky, like almost every artist of note in L.A., was included in 356 Mission’s ‘Another Cats Show’ (a smart-Alec follow-up to an Alex Katz show) which managed to be better than it sounds. One painter whose work leapt out from the melee was Joshua Nathanson, also a winning inclusion in the group show ‘Little Messages for Modern Shut Ins’, curated by Olivan Cha and Eli Diner at Aran Cravey.

What else? Offsetting the preponderance of dudes on my list so far, the tidy two-woman show ‘Wives’, featuring Petrova Giberson and Sam Moyer at the project space Patrick Gomez for Sherriff, was refreshing in its stark economy. As was, for different reasons, the micro-exhibition at LACMA of portraits by self-taught Gullah artist Sam Doyle, who painted on corrugated iron and scraps of wood. A very different stripe of self-taught artist is the Kentucky-based John Tweddle, whose scallop-edged canvases were the best thing that Kayne Griffin Corcoran showed all year.