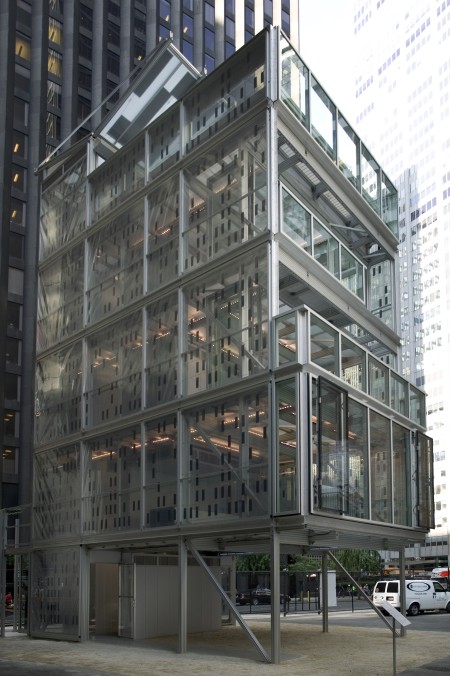 ‘Home Delivery: Fabricating the Modern Dwelling’, a survey of 180 years of the prefabricated home, featured over 80 different projects and five full-scale houses installed on a vacant site adjacent to the museum. The exhibition demonstrated that the idealistic dream of prefabricated housing – linked to promises of both efficiency and mobility – did not begin and end, as is often assumed, with the period just following World War II. The point of the show, curated by Barry Bergdoll and Peter Christensen, was encapsulated in its opening moment, with the continuous screening of an excerpt from Buster Keaton’s silent film One Week (1920) juxtaposed against two wall fragments commissioned by the museum displaying the current fascination in architectural practice with parametric modelling and digital fabrication. In the film a jilted lover deliberately renumbers the crates carrying the parts of a newlywed couple’s prefabricated house. The resulting mess of a home collapses when a train passes, but not before an awkward house-warming party. Keaton’s brilliant satire on modern living also reminds us of the simultaneous idealism and instability at the core of prefabrication and, by extension, the suburban American dream. Although the contemporary wall fragments were meant to allude to the continuity of architectural research engaging modes of production, the social mission of these pieces was lost. Ali Rahim and Hina Jamelle’s Migrating Formations (2008) and Jesse Reiser and Nakano Umemoto’s Vector Wall (2008) were indeed beautiful, but they held none of the promise of a better way of life that earlier experiments in prefabricated housing explicitly embraced.

The exhibition continued with a straightforward and fascinating historical examination of the prefabricated home from 19th-century factory-produced homes characteristic of the new American West and European colonies, through avant-garde experiments with seriality and mass production in the 1920s and ’30s and a robust period of prefabricated construction in response to a population boom and related housing shortage after World War II, to experiments with new materials and social models in the 1960s, dystopian fantasies of the 1970s and, finally, the digital age. Punctuated by archival film footage with wonderful titles such as Houses While You Wait (1930) and Home Made (1919), the survey indeed demonstrated that the legacy of prefabrication includes a rich trajectory of experimentation and, at several points in the past two centuries, was also specifically American. The spirit of the exhibition, a history of moderate successes and spectacular failures, is encapsulated in a small moment at the beginning of the show: a wall of patent drawings related to ideas about prefabricated construction, submitted by such figures as Thomas Edison, Buckminster Fuller and Konrad Wachsmann. The wall illustrated a moment in modern history when critical thinkers in the field of design were actively engaged in the realities of the manufacturing industry.

Like the wall fragments that open the exhibition, much of the work in the contemporary section, entitled ‘Prefabrication in the Digital Era’, was moderately disappointing compared with the rest of the exuberant show, embracing ideas about mass customization via strenuous geometries and the suburban ideal of the individual home at a time when such thoughts feel indulgent. Only Teddy Cruz’ recycled dwellings in Mexico (Manufactured Sites: A Housing Urbanism Made of Waste/Maquiladora, 2005) and Flatform (2008), by Marble Fairbanks Architects, stood out as examples of contemporary work dedicated to exploring the possibility of a better way of living using the tools of the digital age. Thankfully, the show did not end here. The five homes built on the site adjacent to the museum were less experimental formally but presented a perfect conclusion to the show, partly because of the museum’s long-standing tradition of hosting homes in its sculpture garden and also because of the obvious fun of being able to enter the structures physically and imagine oneself living in them. Their optimism, idealism and timeliness were welcome. Best among them was the Cellophane House (2008), by Kieran Timberlake Associates, a transparent five-storey home designed using Building Information Modelling (BIM) and Revit, dynamic building modelling software that will revolutionize the way that time and resources are allocated in design and construction. Built using off-the-shelf components and walls made entirely of SmartWrap layered with photovoltaics and glare-reducing patterns, the house – ephemeral, delicate and modest – provided a fitting end to the show and a hopeful sign of continuing research in (and renewed aspirations for) concepts of prefabrication.