The House in the Middle 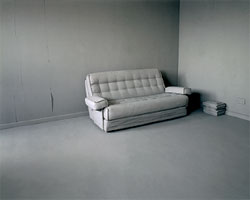 Last July the British government issued UK households with the booklet Preparing for Emergencies – What We Need To Know. Combining practical advice with plain old common sense, the pamphlet urged the nglishman to consider ‘exactly how can I make my house more like a castle?’ With this recent reminder of our vulnerability fresh through the letter box, ‘The House in the Middle’, organized by Photoworks, tapped into society’s sense of domestic insecurity in the face of an unimaginable but omnipresent threat.
The show began with, and took its title from, The House in the Middle (1953), an American public information film made at the height of the Cold War. ‘A house that is neglected is a house that may be doomed in the Atomic Age’, warns the narrator as we watch a nuclear explosion rip through three replica homesteads. As the only cabin to have been properly maintained, it is the house in the middle that survives the blast, proving that a good lick of paint reflects not only domestic pride but also atomic energy. The film ends with an all-American family rushing out with their brushes and brooms to practise ‘civil defence housekeeping’. (The film was produced by the National Paint, Varnish and Lacquer Association.)
Other works used the theme of the home to investigate less tangible dangers. Paul Reas’ series ‘The New Economy’ (1988) sheds light on the social aspirations of Margaret Thatcher’s middle classes by drawing back the net curtains of suburbia. Reas’ photographs reveal a world of tasteful tedium, where homely happiness and ‘suite’ dreams can be bought on the Shopping Channel (incl. p&p). Martin Parr’s ‘Signs of the Times’ (1992) charts the nation’s taste through interior decoration. Intimate studies of gold drapes and sludge-coloured settees are paired with quotes such as ‘We keep buying things thinking “that’ll look better” and it just doesn’t.’
The idea of buying into a lifestyle is continued in John Kippin’s ‘A House in the Country’ (2003). Photographing ‘show apartments’ in new housing estates, Kippin focuses on the way developers dress rooms to appeal to prospective buyers. In contrast to these soft-furnished sales pitches, old EastEnders sets reveal the BBC’s efforts to create ‘realistic’ environments for the soap opera. Even without following the plot you can guess the traits of each character, from the doddering pensioner of Lou Beal’s Bedroom to the workaholic bachelor behind Colin’s Lounge (1984). Although no less staged than Kippin’s show rooms, these fictional interiors both fuel and feed off the public’s perceptions of ‘ordinary life’ to convince the viewers.
Rather than simulating the real, other works turn the domestic setting into a more surreal experience. By painstakingly coating an apartment in grey paint, Danny Tracey’s Grey Areas (2003–4) shows the domestic interior as petrified and suffocating. In Ann Hardy’s Interior Landscapes (2003–4) natural forces close in on her studio, as trees and animal antlers invade the room.
Returning to the theme of nuclear attack, the photographs from Los Alamos Research Laboratory were among the most sinister. Documenting the final hours of the ‘Typical American Community’, the images chart the potential effect of an atom bomb on this entirely fabricated town. The after-blast photos show domestic carnage, with upturned furniture and dismembered plastic limbs scattered across the rooms. Nearby, Chris Cullen’s personal archive ‘The Mystery and Melancholy of the Room’ presented a series of found images of uneasy interiors. Displayed in low vitrines, manuals, magazines, reproductions and adverts are sealed away behind a window of glass – to be broken only in an emergency.
Hitting on society’s fear of the unknown, ‘The House in the Middle’ cajoled visitors into a heightened sense of paranoia, providing the link between the show’s wide-ranging selection of images. In this Orwellian