I am a camera

The rise of moblogging 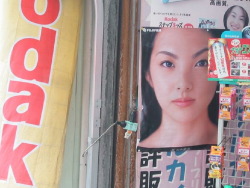 Mobile phone cameras are now an accepted part of our technological environment. If you don't own one, you will have seen people using them at sporting events, in pubs or on the night bus home. You will have also seen the TV adverts in which attractive young models circulate vaguely incriminating images of each other among their friends, promoting a new form of digital grapevine.

But this peer-to-peer activity is a closed transaction, of interest only to those within the social loop. Much more exciting is the growing habit of moblogging, or photo blogging, in which mobile phone users immediately e-mail their snapshots to online web logs for anyone to see. All you need to moblog is an account with a host site that can receive mobile phone images. A year ago this was the domain of super-early adopters and tech industry geeks, but now major players such as Text America, Buzznet and Fotopages are claiming to host over 10,000 registered mobloggers each, with most of them posting new images daily.

To explore one of these sites is to browse the blurry visual trivia of unknown, unknowable lives. A Leeds commuter caught in rush-hour traffic idly snaps the car in front. A diner in an Osaka noodle bar captures a half-empty bowl of yakisoba. Bleary-eyed parents show off a baby barely an hour old. There are plenty of pets too, and weirdly dislocated objects - street lamps, food labels, billboard adverts. Most weblogs are personal - a means of informing and amusing distant friends and relatives. To the rest of us these images are simultaneously mundane and fascinating; familiar, yet alien and disconnected. Like the lovelorn character in Amélie (2001) who collects discarded snaps from passport photo booths, we're compelled to study and construct stories around our findings. And then we move on quickly, enjoying the sugar rush of voyeurism.

Of course, anyone with a digital camera has been able to post images online for years, but the vital element here is immediacy. Moblogging bypasses the editing process - subliminal or otherwise - involved in porting images from a camera, to a computer, to a website - a process that may take place long after the initial photographic event. With moblogging, acts of recording and sharing are separated by mere seconds. There's no time to self-censor. Click, click, it's gone Stream-of-consciousness photography. (Which may account for all those surreal snaps of everyday objects.) For the viewer, the currently low image quality adds to this exciting sense of proximity - when we see grainy images on the news, it means CCTV or amateur video footage, it means authentic reality, never meant for public consumption and therefore hypnotically enticing.

Still, it may be tempting to dismiss moblogging as yet more visual clutter on the media superscape - the effluent produced by a fame-obsessed culture in which lives must be transmitted over the airwaves in order to attain validity. And sure, snaps of drunken nights out and exposed body parts are common. But from the initial exhibitionist splurge new forms are emerging: political activism, for example. TextAmerica hosts a moblog maintained by PETA, in which the group displays photographs of its protests against the fur trade and fast food industry. There's also Raped By The Pump, where disgruntled motorists are encouraged to post photos of petrol prices in their local area, thereby building a national picture of escalating prices. Its an interesting extension of the kinds of protests Howard Rheingold studies in his book Smart Mobs (2002), where swarms of forwarded text messages are used to co-ordinate demonstrations (which is how the people of the Philippines mobilized enough dissenters to bring down President Estrada in 2000). Except that with mobile phone cameras the process is even easier. You can protest from the comfort of your own car.

This feeds into potentially the most explosive use of mobile phone photography - bystander reportage. During October huge wildfires swept through southern California, destroying hundreds of buildings in a 300,000-acre disaster zone. And while news choppers circled high above, taking the usual clinical footage (later to be choreographed and censored in the control room), mobloggers stood amid the destruction, photographing their own burning houses. There are now photo blogs coming in from such political hotspots as Iran, Iraq and the West Bank. What will their unexpurgated photographic diaries reveal?

The Far East, way ahead in mobile communications, shows us what we have in store. As Jon Hardy, who runs the excellent reference site www.moblogging.org, explains: 'Journalistic moblogs are very big in Asia, where mobile phone cameras have reached saturation point. Korea's OhMyNews (www.ohmynews.com), in particular, is extremely popular. Over 80 per cent of the news is created by mobloggers and amateur journalists. The site is now so influential that incoming President Roh gave it his first media interview, exclusively.'

So will moblogging lead to the democratization of the media in the West, or merely to amateur photojournalists hawking their disaster pics to the highest corporate bidders? Major networks are certainly showing interest. The BBC website now invites visitors to submit their own snaps, either personal or news-related - 'Any photographs or video directly related to a current news event may be used immediately on any BBC News outlet', promises the intro text. You bet it may. Someone somewhere in the corporation knows this will be ratings-winning gold dust one day. Mobile phone images are raw, emotional and intrusive. A compelling formula. Imagine, for a second, that this technology had been widely available on 11 September 2001.

Mobloggers also want to challenge our judgements concerning the aesthetics of instant photography. Snapshots are traditionally seen as ephemeral. Most are discarded before anyone else views them, or flicked through briefly with friends. But posted on sites such as Text America, they achieve a critical audience and a modest shot at immortality that would have once seemed utterly anomalous. Interestingly, most moblogs allow visitors to post comments beneath each image, and these often turn into interpretative discourse, a simulacrum of the gallery experience. Indeed, next February the Los Angeles gallery Sixspace is running SENT, an exhibition of mobile phone photographs, housing work by both long-term mobloggers and professional photographers new to the medium. Others will surely follow.

In fact, others have been here before. In 1955 Edward Steichen collated the seminal 'Family of Man' exhibition for the Museum of Modern Art, New York. He chose 503 images from 68 countries, taken by both amateur and professional photographers. 'We sought and selected photographs, made in all parts of the world, of the gamut of life from birth to death with emphasis on the daily relationships of man to himself, to his family, to the community and to the world we live in', Steichen wrote in an introduction to the event. Moblogging takes that spirit and opens it out into an organic collage of global experience. No curator. No editor.

And the technical boundaries are continually shifting outward, inviting new possibilities that we can only guess at. Later this year most of the main host sites will allow users to submit short video clips from their phones, expanding the political, sexual and autobiographical possibilities of moblogging even further. Beyond this, the global position technology currently being implanted into phones will allow snapshot-takers to 'meta-tag' their images to specific real-world locations. Any time you visit a pub, restaurant, tourist attraction, motel or multi-storey car park you'll be able to enter the GPS co-ordinates into your phone and it'll spew out images and comments from mobloggers who've been there before and taken a snap. Memories, downloaded into the matrix for all time. For whatever reason.