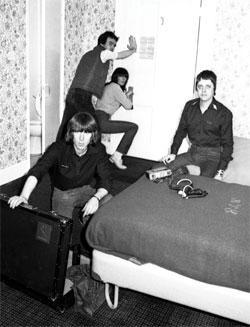 Berlin on a cold New Year’s Eve. An audience gathers at the Volksbühne Theatre. Inside, loudspeakers emit pulsating soundscapes. What is being celebrated is the return of a band, Throbbing Gristle, who, in 1976, were dubbed ‘the ‘Wreckers of Civilization’ by an outraged Tory MP after their earlier incarnation as the performance group COUM exhibited ‘Prostitution’ at the ICA in London. Single-handedly, they invented a musical genre (Industrial) and substantially influenced another (Techno) while deploying some of the most intelligent shock tactics in Pop history.

Jörg Heiser is the co-editor of frieze.