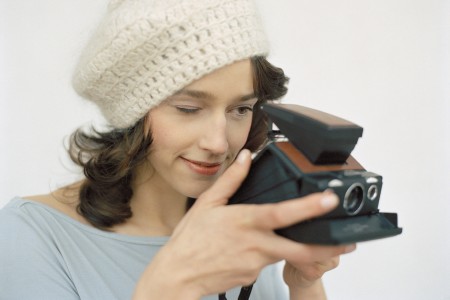 In the opening minutes of Wim Wenders’ film Alice in the Cities (1974) a German journalist, Philip Winter, played by Rüdiger Vogler, stands on a pier and takes instant snapshots of the scenery – pictures that, he later regrets, ‘never really show what you’ve actually seen’. His camera is a Polaroid SX-70: a de luxe folding contraption of chromed plastic and fake leather, launched in 1972 and by mid-decade well established as both aspirant accessory and symbol of immediate modern image-making. As so often with Wenders, the film contrasts two ways of seeing: abstracted and authentic, mechanized and human, cynical and childlike. On road trips across the USA and Germany, Winter takes countless photographs – Wenders had researched his locations using a free camera from the Polaroid corporation – but none impresses his editor: the Polaroid, it seems, is a glossy membrane between artist and reality, a garish barrier to experience and memory.

When Polaroid announced in February that it was to stop producing film by the end of 2008 (the company’s camera lines having already expired), the shift from innovation to nostalgia seemed clear-cut. The New York Times mourned the passing of tactile, memory-laden images that had in their heyday seemed mere flashy ephemera; in The Guardian Geoff Dyer pored over discarded Polaroids from the pages of Found magazine: pictures from anonymous lives gone by, their very medium now consigned to the yard sale of history. But what era, precisely, were the numerous news items on the death of Polaroid intent on conjuring when they spoke of the childish delight and subsequent yearning that come from handling a Polaroid? Although most of the journalists probably didn’t know it, what they had in mind was actually a few brief years in the six-decade history of the company and its products.

It was the SX-70 that sealed Polaroid’s intimacy with innovation and nostalgia. First mooted in the mid-1960s by the corporation’s founder, Edwin Land, the SX-70 simplified the formerly messy process of Polaroid photography to an extreme degree: the camera spat out a snapshot at the touch of a big red button, and all the user had to do was wait in wonder for it to resolve itself in jewel-like colour. So externally simple, and internally sophisticated, was the SX-70 that it was almost impossible for Polaroid to justify in sales its $500 million investment in the camera. Although it was ubiquitous in the mid-1970s – advertised by Sir Laurence Olivier, the subject of cover stories in Time and Life, its workings explained in a promotional film by Charles and Ray Eames – the SX-70 led directly to cheaper, inferior Polaroid cameras and thence to the slow dissipation of the technology’s magical aura.

Which is not exactly to say that Polaroid was in decline, or already an object of nostalgia, by the end of the 1970s. But the place of the instant image in time and history was certainly somewhat ambiguous, if not downright paradoxical. In Alice in the Cities the Polaroids that Winter arranges in a blank, unmeaning row before the scene he has just photographed seem somehow out of time, detached alike from human experience and ‘real’ photography. For the photographic critic Hervé Guibert, however, writing at the close of the decade, the colours of a Polaroid were at once tawdry and muffled; the world that the SX-70 depicted looked ‘filtered as by the screen of a dream’. The image was already sunk in the unconscious, or in the past.

As Guibert points out in his book L’Image fantôme (Ghost Image, 1981), Polaroid had worked hard to make the SX-70 seem a populist camera with distinct artistic potential – a campaign that could be persuasive but counter-productive: Roland Barthes writes in Camera Lucida (1980) that Polaroids are ‘fun, but disappointing, except when a great photographer is involved’. The late Polaroids of Walker Evans are well known, as are the fragile light studies that the octogenarian André Kertész took when confined to his New York apartment. André Tarkovsky used his SX-70 to compose images of his family and the home in Russia that he was about to leave for a new life in Italy, which have the mnemonic resonance of his films, except at three inches square.

Potential instant wonders of this sort are about to vanish for ever: so warn the Polaroid enthusiasts who, in the wake of the technology’s belated decease, have launched memorial websites and online petitions to keep the film, at least, alive. It seems unlikely that the medium will survive, if only because the Polaroid, which already seemed decades out of date by the time its demise was announced, now looks like such a curious dead end in the history of photography. Vast resources were expended, prodigious ingenuity marshalled, to produce an image that defied the essence of photography (that is, its reproducibility) in its second century and now appears as fragile, if not precious, as a daguerreotype. My own ancient SX-70 – looking weirdly broken-backed once unfolded, its lens down-turned when laid flat on my desk, awaiting what few packs of film I can scavenge in the coming months – seems obscurely aware that its days are numbered.