BY Anke Kempkes, translated by Helen Slater in Reviews | 04 APR 01

A
BY Anke Kempkes, translated by Helen Slater in Reviews | 04 APR 01 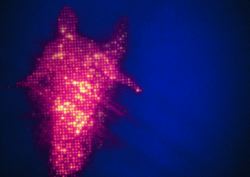 A 16mm film is projected onto a white rectangle at the centre of a garishly painted red wall. At first the image is black, then a figure appears, assembled from abstract, luminous red, jewel-like details. It performs a somersault and disappears. A new figure emerges, traces the same leap in another direction, and then it too dissolves. The red crystals that outline the body fly apart and fade into a swath of light. This scene lasts for 16 seconds. The Jump (1978) is a vision of inane euphoria and innocent abandon, illuminated by a brief flare of decadence. It's easy to forget how skilful the artist's manipulations are: like a self-propelled Romantic archetype, the film seems to animate itself.

A Ballet Shoe (1975), which is 19 seconds long, is also projected onto a red wall: it is an image of a ballerina's foot, encased in a ballet shoe, en point. Two hands appear from the sides of the picture and almost mechanically unfasten the shoe's ribbons. The foot then slowly steps onto the ground. In White Dove (1975) a trained dove sits on a bar in front of a blue background. Slowly the artist's hands, in white make-up, move into the image and construct a triangle in front of the bird, which then flies out of the picture.This well curated mini-retrospective of Jack Goldstein focused on an overlooked moment in Californian art from the 1970s. Goldstein belongs to a generation of artists that worked its way through Minimalism, Performance and, finally, post-Media practice. In 1977 the critic Douglas Crimp, proclaiming a new movement, curated a show entitled 'Pictures' in which Goldstein's work was shown alongside Sherri Levine's and Robert Longo's (among others). Not only was 'Pictures' (which happened shortly before the explosion of 'New Painting') a provocative statement, but by using the word 'picture' as a verb, Crimp drew attention to the ways in which representation functions, and to the imaginative and memory processes that go into the making of images. 'Experience takes place in your head. Real time and real space don't matter', observed Goldstein. The single sound motifs on the 7-inch records he brought out in 1976, which stood in for his unrealizable film projects, have a similar concrete quality: they include, for example, the sounds of a drowning man, a tornado, fighting cats, a burning forest and a yodelling cowboy.

A further issue for Crimp was the much discussed notion of theatricality in the visual arts: intensely stage-managing the image in order to give it a condensed psychological dimension. Goldstein's works from the 1970s are exemplary in their pursuit of this. His films are short, cool sketches, revealing images of objects that last for the blink of an eye, drenched in colours reminiscent of the pastel tones of 1970s' TV shows, or the intense colours of thriller and horror movies. In The Knife (1975) red light falls onto a knife against a dark background, coating the silvery blade inch by inch until it is fully illuminated. The experiment is then repeated in green, then in light red, next blue, and finally pale yellow. It's a very Hitchcockian approach to creating meaning, as if all the elements - object, colour, space and time - had been isolated from the suspense, only to be reconstructed anew, creating silent, artificial drama. And, as with Hitchcock, the motifs are fetishistically charged: knife, dog, door, bird, lion: '...they are all Freudian in some sense', observed Goldstein.

'Goldstein's work seems directly related to fears and anxiety about living in the world', wrote his former student David Salle, 'and yet, significantly, the look of the work is almost antiseptically divorced from any clichéd notion of the language of angst.' Goldstein is a transmitter who moved between the world of the late Modern, with its empathy for objects and self-containment, and the postmodern 1980s, saturated by the media, commercial coolness and obscure borderline humour. High priest of distance and control that he is, Goldstein was also mesmerized by disaster. The one is embedded in the other.

A
ANKE KEMPKES, TRANSLATED BY HELEN SLATER
SHARE THIS