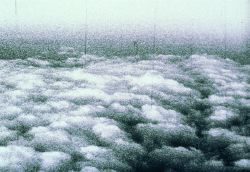 As with every film in Jaki Irvine's recent show 'The Hottest Sun, The Darkest Hour: A Romance', Fireflies at 3am (all works 1999) is a black and white 16mm film shot in Italy. Projected in a dark room, the image is almost totally black - watching it is like staring into an immense,rectangular nothingness. Isolated flecks of light momentarily spark out of nowhere, flare off in odd directions, and disappear. They could be the crackles of static and dust on a blank film, or the patterns you see with your eyes closed. In fact, the blips are a barely traceable nocturnal dance of fireflies. These patches of light against the darkness, and the brief, ambiguous moments of illumination, serve as metaphors for the themes of the show as a whole.

It's also hard to decipher what's happening in Dani and Diego. A dark, glistening shape turns out to be a black Irish setter. A pale, boyish woman croons softly in Italian to the dog as it pants and lolls its tongue. The graininess of the film causes the outline of the woman to fade into the glare of the background. She sings 'Quando‚ ero piccola' (When I was small), a song about childhood fears of the darkness and adult fears of loneliness, and about how she sleeps with the light on. The same woman is the subject of the loving and intimate Portrait of Daniela. She smiles against the sun, exposes her belly and blows a kiss at the camera. She says something, but the film is silent, so it's impossible to tell what. Directly opposite this film is Take-off. A continuous shot from the window of a plane is accompanied by a doleful torch song by the Italian diva, Mina: 'Io vivro senza te' (I'll live without you). As the plane lifts off from the runway and climbs above a tufted, panoramic sea of clouds, her melodramatic lament builds to a crescendo. Taken together, the two pieces act as a meditation on past love: the melancholy of memory, and the painful need for revisiting it.

Marco, One Afternoon is more typical of Irvine's earlier work, both in its length, and in its dreamlike, non-linear structure. A man in sunglasses sits in a city café, sucking on the dog-end of a cigarette. A voiceover - an Italian male voice, with English subtitles - tells the story: how he left the café, went for a walk and fell asleep in a park; how he woke up, went to a café, and there became captivated by an elegant stranger who looked exactly like him, but 15 years older, and who returned his gaze. Eventually, the narrator left: 'I didn't want to know him, it was enough for me just to see him'. Is, then, the meeting with his double simply part of a dream - the solipsistic, homo-erotic imaginings of a man alone in the city? Just as the narrator looks at someone who looks like himself, who possibly even is himself, a similar circularity is posited by the very sequence of images. The final shot of the narrator leaving the café mirrors the earlier one of him leaving to explore the city, before he falls asleep.

Time and repetition are central themes of 'The Hottest Sun, The Darkest Hour: A Romance'. The hottest sun is midday and the darkest hour, just before dawn; romance, the ceaseless repetitionof night and day, of light breaking against the gloom. In each room the projectors could be seen and heard, endlessly looping their rolls of film, illuminating the darkness. When the viewer entered, the films had already begun, which created the sense of being late, or estranged from time. The aged, grainy appearance of the films is reinforced by the evocation of the past in the images. In particular, the subtitles, the café setting, and the man's tight suit in Marco, One Afternoon have the look of an Italian Neo-Realist film from the 1940s. It is almost as if Irvine appropriated the footage from some lost movie, or found the films in an abandoned basement. Walking through the installation was like flicking through an old, second-hand photo album, looking at someone else's memories. It had the same strange mixture of intimacy and distance, of nostalgia and alienation - and the familiar need to construct these ambiguous scenes into something meaningful.