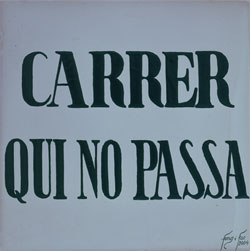 At Jan Timme’s recent solo exhibition there was almost nothing to see except a Spanish ceramic street sign inlaid high up in the gallery wall, a piece of framed carbon with two parallel wavering lines traced on it, and four standard German bar stools placed next to the gallery desk (which I was assured were not, strictly speaking, actually part of the installation). Extremely economical in its material means, the exhibition could easily have been overlooked and made little obvious sense if you were just browsing or hoped that seeing is believing or understanding. It’s standard practice that contemporary art, in whatever mode, is accompanied by some form of anecdote, ‘the story’, which can be prised verbally from those trusted with the job of representing it, gleaned from the press release or found echoed in critical reception, something that Tino Sehgal has latched onto with great effect. Jan Timme’s exhibition used this process too, in a way that showed conceptual agility.
The street sign Passenger (2005) was a kind of remade ready-made. In the centre of a town on the island of Minorca the artist encountered a street actually named ‘Carrer qui no passa’, which translates roughly as ‘street that can’t be passed’ but could also mean ‘course [of the world] that never stops’ or be taken as a pessimistic pun about the artist’s ‘career’. Apparently the street has had this name for centuries, except during the Franco era of cultural cleansing, when it was renamed. The twist is that, in fact, the street isn’t a dead end at all and probably never has been, although there are theories that at one time it may have been walled up during the plague or to ward off unwelcome guests, for the protection of a convent at one end. It’s healthy, especially for critics and their readers, to be constantly reminded that what you read (or write) is not necessarily true. Everywhere information and disinformation, the rational and the absurd, are thick as thieves. The artist has previously set other catchy epitaphs free, for instance in his wall text piece stating the paradox, taken from the writings of Lawrence of Arabia, Nothing is Written (2004). The carbon paper piece Carrer qui no passa (2005), showing the two lines like a sketch of a pipe with two 90° bends in it, was not the whimsical musing of a sensitive artist type, but rather the same street traced directly from the town map. Judging by the drawing alone, having never had the pleasure of strolling around the actual place, it seems that if you were standing at either end of the street you might falsely assume that it leads nowhere because of its sharp corners – a maze-like ruse.
It’s easy to digress while writing about diversions. Going back to the street sign, it’s important to appreciate the fact that it is an imperfect simulation of ‘the original’, which itself is a remake. The artist ordered it from a ceramic painter in Majorca, who, when he’s not producing souvenirs for tourists, is busy churning out street signs – a process that has parallels in post-Wall Berlin. All his wares, including the one in the exhibition, are signed and dated with a folksy flourish. Minor variations in their hand-painted lettering lend his pieces the allure of ‘old world’ charm. But it was Timme’s savvy displacement of the slightly misleading signage that made the work work. For the spatially aware, it wasn’t too difficult to get the artist’s pun that the Spanish street has the same layout as the main path through the gallery. The work cheekily suggests that the gallery itself (or galleries in general, despite their usual clarity of line) are nevertheless places where you might lose your way. The edition of bar stools The Fall (2005) reinforces in a jokey way the inherent dangers for artists and viewers alike. Hidden under each of their seats, etched onto brass plaques, is a dictionary definition of ‘fall’. They offered a place of repose and the possibility of unravelling the scant clues left by the artist, perhaps the opportunity to be made privy to the ‘making-of’ story and then leaving satisfied and bemused that in the world of words, as in art, a little can still be such a lot.