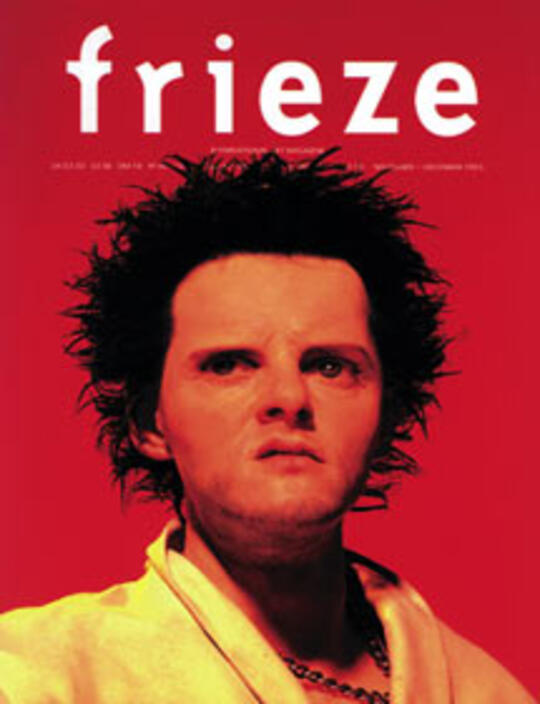 Entering the huge ground floor space of the museum at Bordeaux, the visitor sees and extensive and meticulous array of identical objects. Arranged in a grid, one metre apart, are 1000 stainless steel buckets on wheels. They are like those that may be found in hospitals or prisons. Each contains an assortment of sanitised building-site debris: block mortar, concrete, and square white ceramic tile. The contents of each bucket, initially thought to be randomly chosen, seems to be precisely the same. Looking beyond those that are close by, the grid of buckets extends far into the distance, forming a rectangular field that nearly fills the whole space. The act of seeing the field becomes subject to the regime of perspective. The objects collapse into lines and patterns that make it difficult to see them as discrete and individual. As one walks around the installation, these patterns shift and change. The individual objects surrender themselves to a fluctuating whole, whose nature is constructed beneath one’s own gaze. What begins as a ‘concrete’ understanding of objects with material characteristics fragments into an experience of visual phenomena: The installation ensnares the viewer, ten disappears only to reappear in a new form. The combination of highly detailed individual objects repeated to barely comprehensible limits, and the subjection of that comprehension to perceptual uncertainty both amazes and unnerves.

A catalogue of the paradigms of modernity stands before the viewer’s eyes: the grid and apparently endless Cartesian space; the perspective that is its correlate; repetition; mass-production and the collapse of the original; and alienation through loss of the individual.

This work, La Maison is by Jean-Pierre Raynaud, who represented France at this year’s Venice Biennale. It is, like the work at the French Pavilion, spectacular, overwhelming and disorienting. We are told in the Bordeaux literature that the buckets contain fragments of the house that Raynaud built for himself in 1968, and for the making of this new work, demolished this year. The house from where this creation sprang was a well-known work in its own right. Raynaud worked on it gradually over a period of 25 years. IT was (famously ) lined entirely with square white ceramic tiles set on a grid of 15 by 15 centimetres, with a black grouting joint of 5 millimetres. The pattern and material became Kraynaud’s signature. The house evolved from simply a place that could be cleaned, to an environment that assaulted sensory experience, to a meditative core, to a secret place accessible only to Raynaud. These transformations were noted in the art press as important events in the making of Raynaud’s oeuvre .

At the point where the museum’s literature tells the viewer about the illustrious lineage of La Maison , the work becomes a prop in an elaborate exposition of French Art History. Perhaps this is a natural impulse on the part of a French institution to justify its own existence. By describing Raynaud’s work as biographical and tragic, he is incorporated in the pantheon of French artists whose work is consistently described as transparent expression of their individual genius, inseparable from the circumstances of their everyday lives. Bordeaux wishes to assure the viewer that Raynaud is an accomplished artist deservedly located within this one legitimate tradition. He is a worthy representative of French Art.

It should not be too surprising that Bordeaux adopts this position. After all it is a Museum, one to a network of great French public art institutions. If it is archaic and uncritical, as such it is at least identifiable to its critics, who have come to expect institutionally to appear in guises more sophisticated and insidious than this.
The deeply worrying aspect of this exhibition (which is purposefully coupled with a beautiful installation of Raynaud’s Psycho-objets from the late 60s), is that Raynaud’s own position seems collusive with that of the Institution. As the extensiveness of the ‘text’ that accompanies the work (notable the catalogue essay by Daniel Abadie) overwhelms the viewer with ideas of linear development (innovation and progress), expressions of the spirit (individual genius), and symbolism of the artist’s material lexicon (intellectual sophistry), the viewing of the work becomes and experience of over-determination.

The policy that the Institution enacts is in fact the precise locating of the viewer before a display of the Institution’s own authority. The contents of La Maison’s stainless steel buckets are the fragments of Raynaud’s openly biographical work, of tan environment that claims – even in its fragmented form – to be continuous with his life and practice. These buckets are souvenirs of the way of life/work of art of a genius. They are proposed as pieces of History which can be taken away to a 1000 venues (they were offered to the public for individual sale). The pre-fragmented house was described by contemporary critics as the ultimate Raynaud work. Everything that was Raynaud – his life, his ideas, his work – was there. The Museum’s inclusion of his Psycho-objets is intended to establish the cardinal points of Raynaud’s oeuvre. They are to be seen in this context as blossoming indices of his later work, which came to fruition in his house. The fragments of the demolished house are thus the exposed seeds FO the withered fruit of the artist’s life and labours so far. A new era of work may now begin.

The Psycho-objets (1964-68) are characterised as seminal. In these works, Raynaud deploys a few elements, materials and colours, which find themselves reconfigured in a variety of ways in each new work: the redflower pot (occasionally with the number 3 painted on – Surrealist legacy); white tiles as architectural surface and ‘canvas’(the inheritance of western perspective tradition, Modernist paradigm and emblem of modern alienation); black and white photographs of patients in mental asylums; measuring and counting devices; childrens’ play pens; medicine cabinets, crutches and hospital equipment; manacles and chains; fire equipment; and the colour red and the colour white to the exclusion of all others. Each of these elements is cited as part of a lexicon by Raynaud who attributes symbolic values to them, symptomatic of the condition of Modernity. It was a reactionary lexicography proposed at a time when Modernism proper was at its end. Raynaud derived his terms from the scrap-heap of popular ideas concerning the failure of Modernism, whose legacy was an alienating fascistic dystopia. What is disturbing about Raynaud’s position is its abandonment of criticality. He favours infinite extensions of populist Ideas OF the Artist in Modernity. His assemblies merely enact fantasies of Modernism’s demise projected back on itself. Environment, a 23 metre long assembly made for M and Mme Jean-Marie Rossi in 1968, was an essay on the viability OF such fantasies as commercial strategy. Going ‘private figure’ publicly, Raynaud extrapolated Environment to a complete environment, his own house. There, friends, collectors and critics could do so in a time-honoured way that was dear to institution and the public alike: Raynaud the artist and Raynaud the man were synonymous. His life was his art, his art was his life. He had managed to create a utopian situation out of (superficially) dystopian materials, and he could sell it to private individuals and to the state.

In 1988, Raynaud went into the ‘wilderness’, closing his house to all visitors. Its demolition and compelling reconfiguration (consistent with his oeuvre and its textual description) can be seen as a brilliant development in his self-imposed and necessary pattern of innovation. It is a move which signals obedience to the conventionalising overdeterminations of the Institution: a text which is everywhere, invisible, insidious. The Institution sees that it can describe this moment as the end of one stage of Raynaud’s career, and the beginning of the next. Its vivid description of his work as emblematic of the Idea of the Artist’s Career and Life makes this exhibition a description of the Institution itself, and its own projections. When these constructions are laid over the work of an artist who is dead and is not able to dispute them, that is one thing; when the artist consents and rearticulates them as meaning it is quite another. It is the art of the Salon. It is state art.