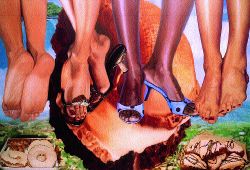 I saw Toy Story 2 (1999) at a drunken late-night screening. The audience was highly amused by the advertisements, which were obviously designed to make children's hearts leap with joy: Day-Glo colours and jumping animations in aid of Kellogg's, Pokémon, Cadbury's chocolate, L'Oreal shampoo for kids ('cause we're worth it too!'). I didn't feel I was worth it too, but I still felt degraded, as a member of the once popular 16-39-year-old demographic. The ads exposed a commonplace of advertising psychology - that the power of persuasion lies in the hands of children who tug at parental coats in the supermarket, and that it is during these years that branding is burnt into kids' developing recognition patterns.

Jeff Koons has always embraced toys - from the loveliness of Inflatable Flower and Bunny (from the series 'The Pre-New', 1979) to the joyful monstrosity that is Balloon Dog (from the series 'Celebration', 1994-2000). However, his shift from ready-mades to hand-crafted replicas revealed not only his Midas touch, but also his preoccupation with just how objects are displayed.

There are thousands of advertising creatives who are obsessed with making caramel melt like magma, or golf balls spin like the moon. Koons paid tribute to their creations, not only with his Nike and alcohol advertising paintings, but with his series 'Made in Heaven' (1991), which was more about the way sex is marketed than about its machinations. However, collapsing the object of his desire into its representation proved too much - the result, an actual baby, demanded more than good stage lighting. But the disaster of the artist's relationship with Cicciolina led to ever fiercer attempts on his part to sublimate his work into a gigantic celebration of child-like innocence. Perhaps Koons is now more than ever a sucker for the grand opera of the advertising illusion.

His recent Berlin show began on the street, with posters depicting piles of mouth-watering ice cream, which hovered against a background of virulent turquoise. The same colour also covered the huge entrance wall of the gallery. 'Easyfun-Ethereal': large yellow letters broadcast the title of the exhibition like an order. Gliding accordingly into the space, shrill screams of 'Rosenquist!' could be heard, while a faint smell of oil paint lingered in the air like a flirtatiously sprayed perfume.

Like Rosenquist's, paintings, Koons' paintings are collages of vast, semi-Photorealist Pop-coloured visuals. But they are two very different artists: the larger-than-life pieces of bacon in Rosenquist's Star Thief (1980), for example, obviously allude to the red and white stripes of the American flag, while other elements in the painting remain abstract. Koons prefers to produce semiotic loopholes between images. The title of Blue Poles (2000), for example, juxtaposes a reference to Jackson Pollock's painting of 1952 with the actual blue poles of a roller-coaster. Koons plays the kitsch of fairgrounds against Pollock's manic jazz: four protagonists wave hello, ridiculously dressed as a lobster, a frog, an octopus and a bat, their mouths transformed into doughnut-shaped pieces of Kellogg's Cheerios breakfast cereal. In the background the sky has become a yummy sea of honey, filled with floating rafts of white chocolate. The Cheerios pop up again in the milk-and-blue brightness of Grotto (2000), whose delirious spiral is broken by blond plaits and grotto stalagmites. In Niagara (2000) smooth, slim legs in Gucci sandals tower over mountains of sugar-coated doughnuts, while water falls in the background, as if promising to wash away invisible sins. In Lips (2000) flawless white teeth can be glimpsed between half-opened red lips, which are echoed in a kernel of corn, suspended in mid-air over green fields. All of this has less to do with the dreamscapes of Magritte or Dalí than with the brute Jungian psychology of advertising, in which food is treated like a toy, and that toy is transformed into some kind of polymorphic perversion.

Koons' recent paintings feel good and fresh as long as you stay with the details. They solemnify the fingerlickin' appeal of the glossy surfaces advertising animation drapes around its products, while recalling the yoghurt-dip sequences in some of Daniel Pflumm's videos, or the shiny apples and hairstyles in Jennifer Lane's film piece Begin Again at Zero (1999). But as a whole they feel maddeningly stale in their forced attempt to eternalize fleeting moments by joining them in a frozen phantasmagoria of authoritarian proportions - as if an isolated kid had hoarded all these toys in their room so they wouldn't have to share them. In Sandwiches (2000), smiling a mayonnaise smile, the ham sandwich gazes with olive eyes at a big brown moustache: no, this is not Duchamp's Mona Lisa moustache, but the one Mr. Potato Head from Toy Story 2 might have lost. Of course, being Koons, he will never give it back.