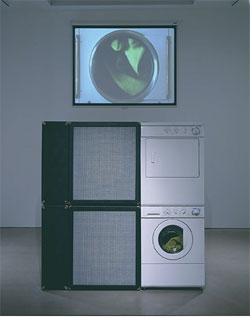 When Jennifer Bolande graduated from art school in 1979, the field of photography was in the midst of a dramatic transformation. Its appropriation by Pop, Conceptual and Performance art had expanded the medium’s boundaries, as had the shift towards colour processing ,which moved the medium into the realm of high-art production and challenged the status of painting. For female photographers the camera became a tool to critique modes of feminine representation and renounce the premise of photographic objectivity. Artists such as Barbara Kruger, Sherrie Levine and Cindy Sherman used photomontage, staged tableaux and performances to explore the artifice of the ‘real‘ and to demonstrate how a picture could create meaning (in particularly in relation to feminine norms). For Bolande, a contemporary of these artists, the critique of photography came via an examination of its material form and the impulse to resolve the distance between image and object.
In this recent exhibition Bolande again pursued the question of photography as a sculptural entity, and re-used themes and motifs from earlier works. Re-adaptation, reconfiguration and regeneration are telling strategies for an artist who came of age in the 1980s, and Bolande relies on a lexicon of banal subjects to probe notions of public and private space. In the first gallery were two sculptures made from an earlier photography series, ‘Globe Sightings’ (begun 2001), which documented common globes spotted in windows. While each image functioned as the proof of Bolande’s obsessive cataloguing, it was also part of a chronicle of her own journey – both perspective and circumstantial details such as building types, window treatments and her own proximity offered clues to locate the artist in relationship to her subject. The hunt for the desk globes became a literal map from which Bolande could explore, in a larger sense, the earth.
In her sculpture Mountain (2004) Bolande pulled from her archive of ‘Globe Sightings’ specific images to use as the foundation for a three-dimensional craggy topography. She first cut out the contours of the windows from each photograph, to make an oblique geometric shape defined by her original relationship to the subject (often at an angle from the street below). Each irregular quadrilateral was then mounted on plywood and used as a pictorial facet to form part of a spiralling Babel-like pyramid. Mountain, the crystalline mound, is a strange and awkward amalgam of natural and artificial constructions; removed from its original context, each window, sequestered on its own ledge, assumes a liminal and abstract character. Paradoxically, the differences between the windows are magnified, even though they have become physically and conceptually united by the artist. Through the sculpture Bolande seems to return her viewer to the reality of the world: we may live on the same planet and use the same globe, but we still look at it from different vantage points.
Bolande’s journey to her sculptures is elliptical, and the interpretation of the work follows suit. Unlikely bedfellows, her pairings have a clarity that emerges