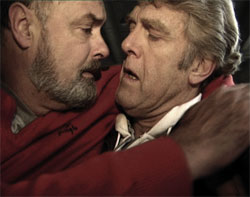 Jesper Just is crafting a subtle genre of his own, re-creating masculine stereotypes within emotionally ambiguous mise-en-scène. While innuendo, insinuation and allusion are hallmarks of his work, Just’s characters are strangers to consequences, and especially repercussions. There is no one to take responsibility for his narrative slivers. There are no protagonists and no director when the credits roll, and with no dénouements his audience can never take responsibility for their own emotions while Just holds them in suspense.

His films, teetering on the fringes of highly mannered mating rituals (The Lonely Villa, 2004) or unrequited homosexual affairs (Something to Love, 2005), never embark on storytelling. Just does not entangle his characters in explicit dramatic motives; instead he sketches thresholds of erotic indulgence, creatures that impersonate rather than perform and shadowy affiliations foregrounded by masses of loose ends. The Man Who Strayed (2003), Just’s ‘opera-video’, introduces us to two middle-aged men: one a redneck (Søren Steen), the other a bearded dilettante (Niels Weyde). In the opening scene the cigarette-smoking good-for-nothing is prowling (or cruising?) beneath a highway flyover in a scruffy car when he spots his prey (or prospective partner) leaning idly against a concrete post.

Giuseppe Verdi’s opera La Traviata (1853), subtitled The Woman Who Strayed, foretells Just’s remix of corrupted love in The Man Who Strayed. Just’s film is a surreal adaptation of Verdi’s agonizing and climatic third act, in which Violetta sings ‘Addio, del passato bei sogni ridenti /Le rose del volto gia son pallenti’ (Farewell past, happy dreams of days gone bye/ The roses in my cheeks already are faded) it is indeed too late for Verdi’s Alfredo, who returns to the love of his life at the moment she succumbs. Just’s dilettante lip-synchs Violetta’s part while the ruffian takes Alfredo’s. The groping choreography magnifies an already confused ‘thuggish-love scene’ to be sure; when we see these ecstatic lovers in fitful embrace, we also witness a mugging. The lighting vérité confirms the sordidness of the location.

With Verdi as his ballast, Just yanks us between a surreptitious homosexual love story and assault with battery. As the Violetta character is fading in the arms of his scoundrel-lover, he gives him a silver pendant necklace, which, according to the Verdi libretto, contains his picture. ‘Take this picture of me in happier days gone by as a remembrance’, Just’s Violetta sings with his last breath. His Alfredo lifts the pendant to his mouth, biting it as his lover dies, but out of inconsolable agony or to test its authenticity? Just, far from offering a contemporary re-staging of La Traviata, commandeers its concluding moments as his test-bed for misplaced passions and identities.

Just’s debt to Stanley Kubrick’s sexual back-roads in Eyes Wide Shut (1999), Alfred Hitchcock’s flair for film noir styling and Annika Larsson’s ritualized fantasies have always been apparent. But coincidentally, Just’s bespoke masculine ambiguities and Surrealist staging, seen recently in his one-person exhibition at the Moderna Museet, Stockholm (featuring Bliss and Heaven, 2004, The Lonely Villa and Something to Love), were lent extra force as Brokeback Mountain (2005) failed to win Best Picture at the Oscars and the 20th anniversary of David Lynch’s Blue Velvet (1986) came and went. More pointedly, however, his exhibition witnessed the publication of Harvey C. Mansfield’s provocatively titled book Manliness (2006) which stares out at Just’s art across the front lines of the culture wars. Mansfield, a neo-Conservative and the William R. Kenan Jr Professor of Government at Harvard, sees masculinity in crisis, as traditional male power roles ebb away in a post-feminist society, heroic models of masculinity evaporate and job security becomes a thing of the past. Professionalism, democracy and feminism spurn ‘manliness’ and defer to equality and reason, while ‘manliness favours war, likes risk and admires heroes’, Mansfield argues. He wants manliness rescued.

Just’s films are anathema to Mansfield, something never more apparent than when watching Something to Love, where a young man (Johannes Lilleøre) attempts to rescue this ‘manliness’. The film begins with Lilleøre’s character being chauffeured into the bowels of an empty underground car park. His driver (Claus Flygare) parks the car near the entrance to a lift, his tears portending tragedy. In heart-rending defeat, mixed with contempt, he opens the rear door to let the young man slip out of the car and into the lift. Within seconds passion has overwhelmed the chauffeur, and he bolts after the young man, scampering up a staircase after him. Like Alfredo, he arrives too late. The young man is in the arms of a beautiful woman (Mette Føns), the couple slowly pirouetting like sweethearts in a music box. With their embrace interrupted by the chauffeur’s broken heart, this experiment in manliness is over. The young man, resigned to a fate we will never really know, returns to the car with the driver. He gets in on the passenger’s side, his Cinderella spell now broken.