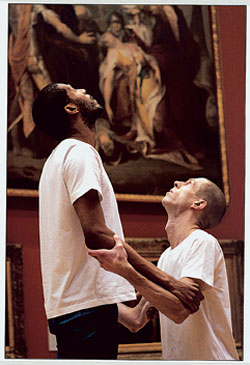 Unless you’re an artist of cynically careerist inclination, the act of making art distorts the line society usually draws between your vocational knowledge – work (and all that word entails) – and your social know-how, the nous of living. Jimmy Robert and Ian White danced that line under the banner of Six Things We Couldn’t Do, But Can Do Now (2004) – an hour-long performance, accompanied by a modest display of related objects. Self-effacingly personal diaristic accounts of their working relationship were intertwined with a sparse formal structure using simple props and stylized movement. Six Things … was a moment for reflection rather than resolution, a spotlight shone on the shifting dynamics of work and friendship. Event culture may be the art world’s current propellant, yet here was a work that could be nothing if not alive.
Although exactly what the six things they learnt to do was never made explicit, the current tugging this diaphanously fluid project along was their learning to dance Yvonne Rainer’s seminal choreographic work Trio A. Originally devised in 1965, the dance is a five-minute piece based on, in Rainer’s own words, ‘unmodulated continuity’. Motion is perpetual, with each element in the dance segueing smoothly on to the next. Based as much on everyday gestures as on balletic movement, Trio A was conceived as a piece of ‘democratic’ choreography that could be performed and taught by anyone – ‘skilled, unskilled, professional, fat, old, sick, amateur’ – yet Rainer has become increasingly particular about who is allowed to learn and teach it. Taught by Pat Catterson, with tutelage from Rainer herself, Robert and White are among the few people who have been permitted to study the dance in recent years. Their conscientious engagement with it served to highlight Trio A’s foundations in the grey zones between creativity as an explicitly demotic method of addressing what it is to live in our world, and the simple task of getting on with things.
Six Things… was staged twice: first in the foyer of Tate Britain’s new Manton Street entrance, then subsequently amid the warm burgundy walls of the museum’s Pre-Raphaelite rooms. Although far less gentle on the eyes, it was the backdrop of the Manton street foyer that gave the piece real charge. More like the lobby of a corporate bank than the entrance to a museum, the sallow beige walls, information desks, and signage worked in impassively bland contrast to the performance itself, lending the piece a mischievous edge of comic pomp.
Programme notes were handed out beforehand: as if written by a daydream-prone member of the institution’s curatorial interpretation team, a large sheet of paper explained each of the ten stages of the performance with varying degrees of helpful facts and oblique personal anecdote. During the first and last phases of the performance, two of the Tate’s art handlers entered the back of the space, quietly hanging and taking down, a small John Cage drawing from the museum collection (Where R = Ryoanji 10R/5, 1984) – a spiritual companion to Trio A. The programme notes stated that the installation was executed according to the Tate’s strict guidelines for hanging art: health and safety rules, security, the museum’s obligations under government insurance laws – hidden engines of administrative permissions, checks and balances.
Dressed in identical white T-shirts and spray-on tight jeans, Robert and White began by sitting opposite each other on two wooden chairs. They kept still for a few minutes, as if mentally limbering up, or taking pause for thought. There followed a series of tasks: supporting each other standing on bricks, and an endearingly faltering attempt to accompany, on piano, a tape recording of Carole King’s song ‘You’ve Got a Friend’ (1971). Gym exercises involving strangely exaggerated movements such as wiping away sweat, or rolling up sleeves were carried out to recordings of White’s relatives repeating the phrase ‘sorry, mate’ over the cheery din of a busy pub. As if part of a mute Gay Pride march, with stately yet camp strides a banner was carried across the room. By each of them moving parts of the other’s body a dance was executed with pieces of blank paper that alluded to choreographic notation. Finally, Trio A was performed three times alongside a video monitor playing the only existing film of Rainer dancing her piece. Occasionally they lagged behind, rushed ahead, or fumbled certain moves, yet they performed the dance with an unerring confidence and self-possession.
Six Things … was, in a sense, a form of institutional critique straight from the heart – a defiantly honest account of getting by with what and whom you’ve got and where you’re at. It was perhaps a little top-heavy with internal cross-reference and allusion, yet in at least trying to acknowledge complex personal matrices it was unafraid to admit fallibility. The different elements were enmeshed together with fierce candour, from the personal politics of sexuality or familial bonds to highbrow discourses of museology. Given the prevailing winds of conservatism and obsession with shallow adolescent truculence sweeping across the art world at present, here were two artists attempting to articulate with frank thoughtfulness why one might make art – if not simply for each other.