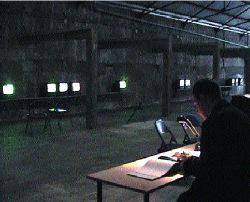 The first impression of Joëlle Tuerlinckx's exhibition 'Audio and Visual Days' was that of a huge installation of flickering lights, in the dark, vaulted space of Argos. Dozens of TV sets scattered across the room simul-taneously poured out eclectic images: fragments of reality that appeared animated by some internal, incomprehensible logic. Colours, objects and figures appeared and disappeared. There were no visible titles, but only dates that came onto the screens for a few seconds, and which explained the show's subtitle, 'Journal de Jours' (Diary of Days). The dates created a few seconds' pause before another narrative, filmed in a single sequence, began, while an indefinable sound, something between a humming and a crackling, lingered in the background.

The 42 monitors were displayed on low shelves that ran along two parallel walls, and on a couple of long narrow tables in the middle of the gallery. Two adjacent monitors depicted a landscape in motion: on the left, a blurred land-scape seen from a train window, and on the right, a revolving plant-patterned cylinder revolving at various speeds. Further away three monitors concentrated on piles of coloured paper, the sheets slowly turning over, or shuffling around to reveal the same colour or a gradation of tones. The camera occasionally focused on the corner of an office space, or a furtive hand turning the paper over, the white skin interrupting the bright gradations of colours.

The display subtly encouraged the viewer to examine the images, while exposing parallels and juxtapositions between films, as if some kind of hidden narrative might gradually become apparent through a succession of unrelated shots. A hand-held camera, for example, scrutinized a landscape from a window before returning to the curtains, the view inside the room, and then, once again, out to the landscape. Several other films explored offices and gallery spaces: one documented an exhibition being hung, while another saw an office vanish into a close-up of a sheet of paper and a pencil obsessively tracing lines of dots. In a couple of the films the background was out of focus, and in the foreground a tiny paper flag bearing the word 'exhibition' was twirled between two fingers. The flags seemed to point towards different monitors across the room, thwarting the linear progression suggested by the display. A network of thin white lines drawn on the concrete floor had a similar effect, its abstract pattern creating links between the monitors. These elements gradually displaced your attention from what was filmed to how it was filmed: the still shots, the close-ups, the panoramic views, all displayed a reduced but systematic filmic vocabulary that was applied to a variety of topics: abstract colours, exterior views with or without figures, inside spaces, words such as 'film', 'exhibition' or mur (wall) written over surfaces.

The catalogue outlined Tuerlinckx's categories: films abstraits (abstract films), blocs de réalités (blocks of reality), notes (notes), and récits (stories). All were made between 1982 and 2000, and are usually exhibited with objects and sculptures. For 'Audio and Visual Days' a vast, growing archive of primary material was presented. This process of reshuffling and withdrawing material from its context functions like a developer in photography, revealing the artist's obsessions. Motion and stillness, viewpoints and fields of vision are emphasized through the accumulation of filmic material. Body and camera become one, recalling the ageing film-maker Renoir asking his assistant to push his wheelchair so that he could 'be like a camera in slow motion'. But beside this cinematic view of the world, Tuerlinckx's videos also suggest that images from the 'outside' become metaphors for images 'inside'; that is, the workings of the mind.

Stepping out of the gallery and back into the street, I was suddenly possessed by a heightened awareness of relations of speed and space: the lines created by roads, footpaths and the angles of the buildings all combined into a secret network of geometric forms that demarcated the environment like thin white lines drawn in the air.