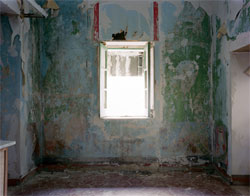 The five colour photographs that make up one half of ‘Morning of the Magicians’ (2005) look rather overexposed; the five black and white ones less so; the effect is as if the branches of the bushes surrounding the decaying Mediterranean house shown in the photographs were growing into the gallery space and scratching my eyes. Joachim Koester’s ten photographs depict the villa’s exterior and interior. In one of them the following words can be seen, scribbled onto a wall: ‘Stab your demoniac Smile to my brain Soak me in Cognac and Cocaine!’

A three-page text by the artist accom-panying the photographs tells how, in 1920, Aleister Crowley and his group of druggy, sexually experimental followers turned this Sicilian house into an ‘abbey’ for their occult practices. In addition to the Crowley story, the text is also informative about the modern history of occultism in general, and about others who, before Koester, had taken an interest in this house, such as the American sexologist Alfred Charles Kinsey. If you had read about this place in your own ‘experimental’ days, seeing it now, maybe for the first time, might arouse some excitement – except that the austerity of the images militates against any emotion. They are ‘objective’, like forensic photographs of a crime scene – but without a crime.

A similar atmosphere could be found in the images comprising ‘The Kant Walks’ (2005). The text next to the photographs was filled with anecdotes of the nightmares that haunted the ageing Immanuel Kant, and of how Koester got help from an elderly professor in trying to recreate the route the philosopher had taken on his daily stroll through Königsberg. By contrast, the seven resulting photographs mostly depict unpopulated, drab buildings ranging from garages to Soviet-style housing blocks.

There are no people in any of the pictures, which adds to the feeling of emptiness. Koester’s ‘Message from Andrée’ (at the Danish Pavilion, Venice, 2005), has a similar effect. In reproductions of the original photos on which that work was based – which were found in the ice 33 years after the Swedish scientist Salomon August Andrée went missing during a balloon expedition to the North Pole in 1897 – the frost stains on the negatives, having been left in the frozen camera for so long, are usually retouched out. Koester does the opposite: he keeps the stains and removes the subjects. You could laugh it off as a conceptual pun, but the artist has a more serious purpose in mind. The technical overexposure of and the lack of any people in the images places them in a sort of parenthesis. Many felt almost like photographs of other photographs. In one series of work on display, ‘histories’ (2003–5), Koester had actually re-photographed pages from a book containing photos taken by Robert Smithson and Gordon Matta-Clark, and juxtaposed them with his own pictures of the same locations taken about 30 years later – an attempt to materialize the passing of time.

Koester’s interest in literary references is most overt in ‘From the Travels of Jonathan Harker’ (2003) photographs of the Borgo Pass in Romania, which the hero of Bram Stoker’s Dracula (1897) crosses, pursued by wolves. In the accompanying text we learn that Koester’s interest in the place was fostered not least by the fact that Stoker had never been there himself. Seeing grey Transylvanian mountainsides as photographed by the artist is frustrating. To get anything out of the images you have to join in the game played out between them and the accompanying text: a combination of pictures and words that risks being not that different from what you might find in a guidebook. To enjoy these works fully, you possibly need to be an obsessive bibliophile. But you do get a sense of how Koester enjoys producing them – visiting the venues of fascinating stories, taking photographs, absorbing the setting and allowing his writing to mingle with that of Bertolt Brecht (‘The Brecht House’, 2004), Crowley, Kant and Stoker.