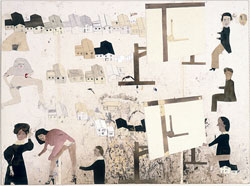 Enthusiastically bizarre, Jockum Nordström has emerged as the latest in a long line of deadpan Absurdists, here marrying Dadaist peculiarities with northern European folk art. In intricately worked pencil drawings and rough-hewn, child-like collages Nordström reiterates his favourite subjects: guitars and pianos, horses and owls, three-masted tall ships, top-hatted characters from 17th-century morality tales. Lumpen bodies with oversized heads stare tranquilly as bits of naked bodies peek out of a closet; a woman smiles with comic blankness, although her eyes are half-way down her face. Sex is everywhere – gleefully, weirdly and variously depicted in a facile but charming contrast to the works’ old-fashioned aesthetic.
Best-known for his collages, the Swedish artist draws sympathetic figures, props and background decorations for his scenes, then cuts them out and shifts them from piece to piece. He creates several at a time, and weaves the clippings, rag-rug-style, into the background of later works. Even taken individually, his pieces thus intimate their participation in a larger oeuvre – one that, if you had the chance to see it, might explain the strange couplings and goings-on in these tableaux.
Like a number of artists working in illustrative media – Neo Rauch or Amy Cutler, for example – Nordström balances representational elements with a barrage of disjunctions: doses of Surrealism, logical incongruities, rifts between form and content, unexplored allusions. His best works here – Ordning (The Order of Things, 2002) and I Lejonkulan (In the Lion’s Den, 2002) – achieve a partial suspension of time and place that is uncanny and oddly thrilling. Insistently remaining in the present tense, his scenes exist by fiat rather than as the result of a long germination. A woman sits in the lap of a trouserless man – but it is not erotic and, amid all the scene’s absurdity, does not signify. Rather, the