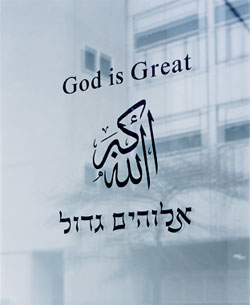 John Latham has been baffling biologists, physicists and cosmologists for decades with his attempt at a synthesis between art and science. His radical innovations stretch from Tachisme in the 1950s through assemblage and Conceptual art to now, in his 80s, his aim of a Utopian art ‘after physics’. An attempt to reconcile the ethical goals of humanity with the dominant scientific theories of the universe, it is as startlingly clear as it is complex and elusive. Because of the high objectives and eccentric measures involved in Latham’s attempt to wrest reality back from a destructive rationalism – and its affect on prevailing modes of perception – he’s been described, among other things, as an English visionary artist in the tradition of William Blake, as a character one could equally take for either a madman or a genius. Later this year there’s a major exhibition of his work at Tate Britain. Somehow though, partly because of his rigorous research and elusive persona, it’s still perhaps more interesting to look at how his latest inquiries into a world unwilling to ‘imagine’ walks the thin line between clarity and confusion.
His latest exhibition at Lisson, ‘God is Great and Belief Systems as Such’, presented works selected from a 15-year period, a number of which aimed to combine the sacred texts of the world’s three great monotheistic religions – the Torah, the New Testament and the Qur’an. The first indication of any unification in the gallery was provided by a self-titled vinyl text work, God is Great (2005), situated in the window and written in the languages of Hebrew, English and Arabic. God is Great (#2) (1991) was also positioned on the ground floor, and consisted of an eight-foot tall sheet of glass penetrated yet stabilized at the bottom by five large bound volumes of The Times. These were accompanied by another five religious texts held at head height. There’s a twofold critique here, because Latham’s glass is the nearest, perceptually speaking, we have to non-materiality or a representation of state zero. With the archaic tomes representing human culture and knowledge, their separation symbolizes the divided accounts that dominate organized religion and theories of the universe. In another sense it also shows a vital empathy with the failure of human endeavour, the pathos of which is perhaps more powerfully evident in another work, God is Great (#4) (2005), which consists of the three books surrounded and covered by a huge area of smashed glass in the basement.
Not only do these works use and reference Marcel Duchamp’s use of glass; they also acknowledge Gottfried Liebniz, the 17th-century philosopher and mathematician who was interested in zero as a sign for nothing, or as a sign for an absence of signs. Liebniz imagined combining the sciences in a single system of truth, and Zero Space, Zero Time, Infinite Heat (2005) – another text work situated above the gallery stairwell – seemed to echo the more destructive tension between point zero, infinite space and Latham’s engagement with books and language. If his current interest in relief and assemblage situates books and human knowledge as insecure fragile objects, then glass provides the ground for his critical interrogation of various belief systems. By using the three sacred books in this exhibition to work both for and against the tradition of the book as art work, Latham’s violent abuse of text also combines with the act of reading to represent ‘linear time within an omnipresent sculptural time’, creating a macro view of our cosmos through micro ‘events’.
Perhaps the most economic representation of a ‘primitive event concept from which one could derive a picture of a world event’ – Latham’s conception of ‘least event’ – was provided by three ‘one-second drawings’ or Two-Sided Paintings (2004). A series of small paintings on paper, or records of ‘events’ made by a series of one-second blasts from a spray can, form galaxy-like constellations when seen from the other side. The experience of these split-second black-on-white negative supernovas, which Latham has been developing in various forms since 1954, and which contain the stamp ‘Noit’ (his term for a larger historical continuum), provided the simplest form of perceptual shift in the exhibition.
This collection of work was timely owing to the current level of extreme political tension and fundamentalist belief within the world. Seen alongside such recent exhibitions as ‘100 Artists See God’ at the ICA, a mainly Judeo-Christian view of the world that comprised small accounts of iconoclasm and irony, Latham’s exhibition appeared grand and idealistic yet stable. In one respect, his position runs the risk of being undermined by the distance from which he views monolithic belief systems, by the way he mirrors the perspective he’s attempting to take apart – an all-pervading vision of the universe. Luckily his ideas of uniting art and science for the benefit of society aren’t entirely implausible, and the thing that saves his project is the oblique angle that the work is able to take on dominant discourse and world crises.