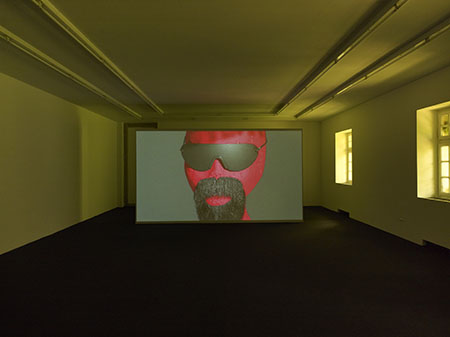 Since the late 1980s, Belgian artists Jos de Gruyter and Harald Thys have been working collaboratively to produce a series of filmic works notable for their intensity, inscrutability, and a deeply obscure cast of recurring characters. The title of their recent exhibition at the Neuer Aachener Kunstverein, ‘Das Loch’ (The Hole), was fitting, given the kind of dark psychological abyss into which they cast their audiences.

The ground-floor gallery was empty save for a long, casket-like Perspex box. Inside it lay a figure with hinged metal strips for arms and legs and a polystyrene head painted fluorescent yellow with a fuzzy orange beard. Its angular body was dressed in a checked shirt with a grey pullover slung around its shoulders, accessorized with John Lennon-style sunglasses and a black beret, in a strange combination of casual style and wannabe bohemianism. This carefully styled but rudimentary puppet, sinister if not satirical, was Johannes, painter, *1947 † 2010 (2011), the main protagonist of the film Das Loch (2010), which played upstairs.

Das Loch narrates the parable of Johannes, the disappointed amateur painter; his equally disappointed wife Hildegard; and Fritz, the fast car-driving, technology-obsessed video maker – all German-named, German-speaking, German- stereotyped characters. Each is represented by a polystyrene-headed figure, shot close-up against a grey background. The visual effect of these puppets, with their painted heads and cheap styling, is oppressive, but it is their words – spoken in a slow, utterly monotonous German punctuated with long, uncomfortable pauses – that make Das Loch almost unbearable. The unforgiving flatness of the imagery and sound (the voices occupy some estranged region between natural and synthetic) seems to hint at ominous unknowns beyond what we can see and hear. Fritz’s creepy stories of racing his Jaguar or making questionable video works seem to conceal nightmarish scenarios, while Hildegard’s appeals to her husband to give up painting and take up video-making seem riven with misunderstanding. Johannes’s expressions of his love of nature, art and his wife become hopeless, dreary monologues. Just as the blunt modelling of the puppets strips them of any unequivocal humour, so their slow, dreary voices do away with narrative expression, robbing the jokes – if that’s even what they are – of their punch-lines.

Although Das Loch is unique in its use of puppets to replace the cast of real people (usually recruited from friends and family members) in De Gruyter and Thys’s previous films, the slow takes, static camera position, and close-ups on the mute characters’ inscrutable expressions are similar. In the end, it seems only a short leap from the mask-like faces of their earlier characters to the expressionless faces of these inanimate heads. The ominous, identically dressed duo that appears throughout their films as figures of intimidation or authoritarianism, turns up again here, closing the film with a recitation in diabolic, guttural Italian: ‘We will break into all of your holes. We will do so until only one big hole remains […] We are like that.’ The film ends and church bells sound a death knell over the Stadtpark, presumably for Johannes.

In De Gruyter and Thys’s films, art making is seen as a means of self-expression – as it is here in the form of Johannes’ painting – while art objects are repositories of emotion, objectifying the repressed characters’ search for meaning. Given the lack of emotion visible on their faces, these objects instead become a substitute and point of connection between individuals. People cannot help each other, it is implied; only objects have a chance.

Which brings us to the artists’ concurrent exhibition at Hanover’s kestnergesellschaft, ‘Objekte als Freunde’ (Objects as Friends). ‘Untitled 1 –176’ (2010–11) – a series of 176 photographs of everyday objects, carefully lit and presented against a grey background – emphasized the arbitrary value of things as well as the drive to compose and record. In a new video, Johannes Farben (2011), meanwhile, the amateur painter recites his theories of colour, as superficial as his painting itself, equating each colour with various feelings or emotions. Interestingly, though, the primary colours here were not a painterly red, yellow and blue, but rather red, green and blue – the primary colours of projected light. Again video wins over painting.

Where does this parable on amateur art-making and the futility of human relations, not to mention video versus painting, leave the work of the artists themselves? Do they align themselves with Fritz, the repugnant video-maker? Or do they see themselves apart? In a body of work characterized by non sequitur, estrangement and gaps of understanding, this is yet another unknown. Despite the apparently desperate state of human relations portrayed in the film, there is a foundation of empathy that prevents De Gruyter and Thys’s work from being nihilistically satirical. Art may be a futile enterprise and ultimately misunderstood, but perhaps it is our only chance.