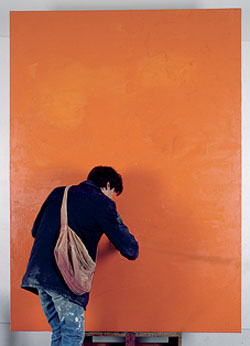 Artists’ retrospectives are all about straight lines. Over the course of a career there may be side-tracks or detours, but the overall trajectory is clear. Young artists in particular are attracted to this idea of a clearly defined, self-contained and intelligible construct. All the more reason, then, to consider this exhibition of work by the late Josef Kramhöller – designed by the artists Amelie von Wulffen, Axel John Wieder and Stephan Dillemuth and produced by the curators Kathleen Rahn and Rita Kersting – as an experiment. No attempt is made to serve up the best of Kramhöller’s legacy on a plate for art history, or belatedly to stage the major début that failed to materialize during his lifetime. Von Wulffen, Wieder and Dillemuth, who were close friends of Kramhöller and who are managing his estate, know that an artistic life abandoned – Kramhöller committed suicide in London five years ago, at the age of 31 – cannot be represented as a straightforward linear development. Hence their bold decision gradually to shed new light on his work step by step with each venue the show visits, including this, from the material Kramhöller left behind.
The orange paint of Ohne Titel (Orangefarbenes Vaselinebild) (Untitled, Orange Vaseline Picture, 1994) glows, covering almost five square metres of wall in portrait format. The canvas sits rather tightly on its stretcher. The oil is loosely applied, a warm tone, with a heavy admixture of yellow visible in many places. In the lower third of the canvas sits a clot, an almost circular, translucent blob of Vaseline, a cheap synthetic product with many uses: protecting the lips from the elements, soothing chapped hands, providing lubrication during sex. The fact that this blob, several centimetres thick and with a hole in the middle, looks as if it marks a point of entry into the picture, a bit like an orifice, gives the work a physical dimension. One can almost feel how Kramhöller once treated it – imagine him rolling it up, storing it away, putting it back on the stretcher, smearing it with Vaseline and packing it away again, with the Vaseline removed. A photograph shows him from behind, a young man in paint-smeared trousers, leaning attentively over the spot to be marked with grease.
Kramhöller, who grew up in rural Bavaria and who in the late 1980s studied under Hans Baschang at the Munich Academy of Fine Arts before switching to Chelsea College of Art and Design in 1994, was not a painter in the sense of being someone whose pictures can be exhibited, stored, managed and collected separately from the rest of his work. With the canvases come sketchbooks documenting his ceaseless takes on the same motifs, as well as texts and photographs. There is video footage of his performances, and stills of him preparing for readings. The photographs of his fingerprints on shop display windows, Ohne Titel (Fingerabdrücke auf Schaufenstern von Boutiquen) (Untitled,Fingerprints on Fashion Shop Windows, 1995), recall brief actions in central London. The focus on the small oily whorls – motifs of desire – fuses the carefully arranged and lit splendour of the consumer goods into a brightly coloured, totally blurred abstraction.
Two deep purple canvases (both Ohne Titel, Untitled, 1994) are shown as Vaseline pictures only in the catalogue; in the exhibition itself they are presented without the dabbed-on streaks and curls, each of them as a nearly uniform expanse of colour. Instead of representing a compromise with their owners – mostly fellow artists – this is probably the only way of showing