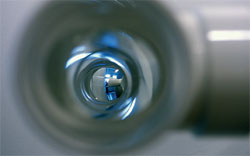 Julianne Swartz must surely hate walls. Everywhere she goes she attacks and destroys them, poking, tearing, drilling and rending their placid surfaces. She opens them up, puts things in, pushes things through and generally mucks around, without much respect for the sanctity of enclosure or the inherent goodness of what a wall does – namely, provide shelter and a bit of privacy.
In other words, her work knows no bounds. In fact, it is devoted to boundlessness and to fluidity. Every attempt at containment is countered by an insistent rupturing, a preference for the playful destructiveness of leaks. Quietly worming their way into places they shouldn’t go, Swartz’ PVC piping, fibre-optic cables, wires, threads, lenses and tape collectively invade the body of buildings, spreading like indiscriminate infections, as in Excavation (2004), where a Perspex-encased fibre-optic cable snakes willy-nilly across the gallery space to embed itself into a far wall. A ragged opening next to the site of penetration reveals a minor conceptual miracle: a tiny beam of light aimed at a prism gives birth to a soft rainbow on the dark side of the plasterboard.
Sexually acute, Swartz’ work trades in the rough interface between body and building. Architecture and its ordered, ordering imperative are consistently pitted against human frailty and our irrational impulses. The body and its sensorial extensions – the probing eye and the disembodied voice – are set loose to subversive, often poignant, ends. The most compelling case in point was Swartz’ 2003 installation at New York’s P.S.1 titled How Deep is Your…. There Swartz ran baby-blue plastic piping throughout the massive, labyrinthine former school building and on the top floor invited visitors to insert their heads within a large blue funnel and listen to the faint, tinny audio of the Bee Gees’ song. As we followed the circuitous trail of pipe and its sonic contents, Swartz pointedly forced us to go down into the basement of the building – its dirtiest, most abject space – and into the rusted iron boilers to locate the source of the music. Somewhat wickedly, Swartz seems to take pleasure in revealing hidden places – closets and storage rooms, toilets and barns – dark places where things that aren’t necessarily meant to be seen are put or done. Yet there’s a quality of innocent wonder at the heart of the work that prevents it from slipping into a morbid, forensic realm. In fact, Swartz plumbs the depths only to instil a little levity: in the filthy cellar a love song plays; the hole in the wall reveals a nascent rainbow. Her interest is too complex and her vision too attuned to the fact that nothing is ever simply one way or another to rely on easy dichotomies. Interior and exterior, public displays and private activities, transcendence and abjection, containment and leakage: these seeming opposites exist in an uneasy, evocative alignment in Swartz’ work, informing and transforming one other.
It’s this quality of sweetness and light-heartedness that strikes one most immediately on encountering