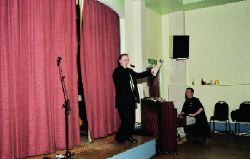 Julie Henry's Going Down (1998) was one of the strongest pieces in 'New Contemporaries 99'. It comprised two video monitors which played a continuous loop of fans at a football match. One set focused on the subdued group supporting the losing team, while the other featured the laddish grins and celebrations of the supporters of the winning side.

For her recent exhibition 'Talent Show' Henry chose to investigate another social dialectic, this time between the audience and performers in a talent contest at one of the last remaining working men's clubs in London's East End. Tom and Delilah (2000) is, once again, a twin video installation. One monitor features a contestant singing 'Delilah' - with his louche swagger, fingertip grip of the microphone, and cocked eyebrow, he is obviously trying his best to imitate Tom Jones. The other monitor concentrates on a middle-aged woman seated in the audience surrounded by a collection of beer glasses, who sings along with drunken gusto. The videos are looped, as if the man and woman are performing a perpetual serenade. At one point a woman a few rows back leans over to her companion and comments 'he does look just like Tom Jones, doesn't he?' -he doesn't.

The downstairs galleries displayed lush photographs of the contest taken by Henry's collaborator on this project, Debbie Bragg. The images were roughly divided between the contestants and audience. With the photographs of the former, an inevitable guessing game ensued about who each performer was trying to be. Was the young man with the sharp suit and raffish quiff a wannabe Bryan Ferry in his post-Roxy Music, lounge-lizard persona? Was the young woman with the pretty black dress and imploring look on her face a wannabe Celine Dion? And as for the bespectacled man in the shell-suit top and jeans, legs akimbo, banging away at a tambourine: well, it wasn't clear at all - conceivably a wannabe Bez from the Happy Mondays?

The photographs that depict audience members trigger other fantasies: the bored teenage girl staring sullenly into her Coke bottle, even though she probably feels old enough for a drink; the middle-aged man wearing a large gold ring encrusted with the Playboy bunny logo, who might be watching his girlfriend on stage. Most arresting is an image of the judges posing smartly with their notes, pens and drinks in front of them on a long table that fills the width of the photograph. Behind them sit the rest of the audience, chatting, laughing and standing up to get the next round. Like Da Vinci's The Last Supper meeting a Bruegel, it's a snapshot from working-class life - an overwhelmingly white one.

'Talent Show' manages to avoid being voyeuristic or patronising. These images are not social documents: the kind of pseudo-anthropological investigations into an objectively identifiable culture claimed by National Geographic or Colors magazine. By blurring the distinction between audience and performer they call into question the performative nature of class affiliation: class as a process of active participation in a communal fantasy, as a ritual of acting. After all, as Marxist historians are so fond of pointing out, class is nothing in and of itself, but rather a register of social difference that enables people to know how to treat each other when they meet for the first time: to know, in effect, how to act. Just as the contestants‚ props, stage and microphone make this notion explicit, the audience also have their own props, typical signifiers of working-class life: white trainers, Beckham-cuts and Ben Sherman shirts for the boys; high heels, highlights and short skirts or the girls; gold jewellery and perms for both sexes. And all this against a backdrop of warm beers and cellophane-wrapped sandwiches, patterned carpets and formica wood-grain effect table tops. Moreover, if class is a performance, as these works suggest, then how involved and convoluted is the performance of that most rarefied sub-class: the artworld - Henry's real audience.