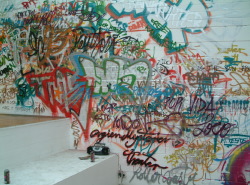 The walls shone in glowing colours. Graffiti tags and pieces were resplendent against the chalky sandstone; lurid lettering caught the sunlight through the narrow windows; bright synthetic spray-paints coiled their way along the walls and framed the spindly 15-metre-long structure, made of pale wood, that was moored to the walls with red rope. Kalin Lindena had invited five Frankfurt graffiti artis and the sculptor Andreas Gehlen to be part of her show 'Sunburned and Snowblind' at Simultanhalle. At first, Lindena kept a low profile, arranging the group work but not intervening, adding just a few thin pencil lines in neat capital letters, such as 'God is present - the devil is in the detail'. Even this discreet comment almost disappeared behind a yellow star and a purple scrawl that slid skilfully from the wall to the floor. Graffiti knows how to deal with fissured walls, junction boxes, crumbling plaster and mouldy cracks in a dilapidated hall (which in this case takes its name from a brief period spent as a test site for the grand proportions and lighting of the new Museum Ludwig building).

After the opening Lindena focused on the exhibition, turning the hall into her studio and working there whenever she had time. The finissage celebrated an entirely different space. Lindena painted over most of the walls in white, with only outlines showing through as a reminder of the floor-to-ceiling lettering, plus a few patches of colour here and there in the corners. All that remained of the belted wooden installation was a thin skeleton full of gaps. These interventions were all quite overt and freely acknowledged. The graffiti writers Mans, Klef, Beks, Combo and Shit had been surprised at the respect and restraint shown by the artist before the opening. Now all the colours seemed to have flowed into a single corner, as if weeks of rain had washed them from the walls and into a large puddle, a brightly coloured conflux. The mural was richer and more iridescent, nearly achieving a three-dimensional quality. Shards of glass and fragments of mirror were stuck between the thickly over-painted shredded lettering and the remaining chunks of tags and knots of colour. Form and content were mirrored and drawn out, with one large piece of writing actually running backwards. Loose, gestural sequences had lost their way and gathered around a central point.

Lindena herself spent ten years creating graffiti before going to art college. As a result, she knows how to deal with plaster and stone and with large formats, is familiar with the close, swift co-operation in the graffiti scene, and knows from experience that what counts on the wall is not necessarily what lasts. Anyone who leaves their mark as a graffiti artist risks having their work immediately obliterated, so it is no sign of disrespect when Lindena goes to work with her brush. In her painting she avoids the white expanse of the paper. In the same way that graffiti relies on the irregularities of the street, Lindena's pictures rely on stains, which she transforms into, say, flamingo necks, branches or clouds. Recalling the motifs used in the Rorschach psychological test, these pictures reflect the fact that Lindena values what already exists - even as she radically transforms it or extinguishes it.

Just as Lindena's many-layered painting employ depth and density to simulate three-dimensionality in one place while maintaining completely flat surfaces for words or quotations in another, so her experiment here dealt variously with its guests. Working with Andreas Gehlen, Lindena reduced the artist's huge construction to its bare bones. Shortly before the finissage, the two of them worked side by side to reassess the elements of their works and create a new balance. The stripped-down version of the installation became a hanging sculpture, cutting the space diagonally like a compass needle, pointing at the dark, densely woven mural, which was no longer an architectural ornament but had become an encircled and inscrutable opponent.