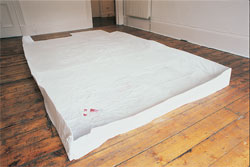 In an interview conducted shortly before her death in 1970 Eva Hesse talked about the instability of her works made using rubber. She said: ‘At this point I feel a little guilty when people want to buy it. I think they know, but I want to write them a letter and say it’s not going to last. I am not sure what my stand on lasting really is.’ The combination of rigorous method and fragility found in Hesse’s sculptures provides the background against which Karla Black charts her sitespecific interventions. Black makes process-based sculptural pieces, often using familiar domestic materials such as face cream, clothing and flour. Both her ‘ingredients’ and her method – intensive periods spent meticulously creating abstract tableaux – inevitably evoke ‘feminine’ occupations such as baking and nursing.

In this exhibition there were two works, the first of which was a large floor piece, Push Push (2004), consisting of layers of cardboard, newspaper, paint, water and polythene, shaped into an enormous low-sided tray. It had been built up as if from carefully wound bandages, creating a tactile surface very suggestive of skin. Within this imaginary landscape lay a few emptied-out tubes of steroid ointment. The smears of medicinal cream combined with the painted surface, deliberately spoiling its perfect whiteness. Although Black’s art projects ideas relating to healing, the ritualistic element of her practice is more self-conscious than it is in those of the earlier Performance artists she admires, such as Carolee Schneemann or Günter Brus. The abreaction that occurs in her work is both an expression of repressed anxieties present in wider cultural discourse and a working through of ideas of selfhood. Although previously Black made public performances, her work now exists as an installation artefact, or as a kind of indirect self-portrait.

Black’s art is not only about the body; it also speaks to and of the surrounding space. This exhibition, for example, reflects and amplifies its setting, in a tenement bedroom that doubles as the artist-run gallery Mary Mary. Walls with painted-over cracks and holes paved with Polyfilla reappear in the texture of Black’s work. In the days she spent in the space the artist created images not only of herself but also of the atmosphere of the room. Push Push points both to the healing rituals of 1970s Performance art and to beauty routines conducted within the bedroom. Similarly, the second piece in the exhibition, The Target (2004), composed of flattened layers of clothes encased in strata of glue and white paint, draws simultaneously on art-historical references and the resonance of the specific room in which it is situated. This use of clothes evokes several other pieces that deal with loss, such as Felix Gonzalez-Torres’ photographs of indented pillows, Bas Jan Ader’s All My Clothes (1970) and Christian Boltanski’s works using piles of garments. The shrouding of the clothes within a shell of paint contributes to the sense of clothes kept as a memento. But the work also makes a distinct nod to Robert Rauschenberg’s Bed (1955), while its title can be seen as an allusion to Jasper Johns, Rauschenberg’s significant other during that period. The Target, the single aim, is reconfigured here as an intimate event.

Both of the works in this exhibition could be read as a reflection of the private rituals of a girl in her bedroom – conducting skincare rituals and sleeping with a T-shirt worn by her ex-boyfriend. Black’s choice of materials orientates the viewer towards this mundane domestic world, but in her handling of these materials it is also possible to recognize something more profound. Her work seems to reveal the way in which the real world of objects and events is transmuted into imagined symbols. In a sense she is conducting the process in reverse, making signification more convoluted, more diffuse. At times this method has generated events that were almost imperceptible, such as an earlier work in which she left a pile of 2000 Alka-Seltzer to dissolve on the pavement in the rain (Untitled (2000 Alka-Seltzer in the Rain), 2001). Even more complex pieces, such as Push Push, are often discarded once they have been shown. This work, so rooted in the contingent, is in the end consigned once again to memory. Its physical manifestation lost, it lasts as an idea for the longest time.