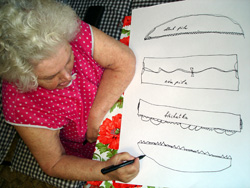 When Katerina Šedá’s 76-year-old grandmother, Jana, fell into an impenetrable depression after her husband died, refusing to cook, bathe or leave the house, the young Czech artist devised a series of exercises to encourage her grandmother to do something other than watch television. (According to the artist, her grandmother would watch whatever was on because ‘the remote was just out of reach’.) Šedá persuaded Jana to try to recollect every item sold in the hardware shop she managed in Brno for 33 years. Then she urged her to draw them.

The resultant collection of drawings – shaky, rudimentary black shapes depicting sets of everyday items like screwdrivers, pliers and paintbrushes, each labelled in Czech in Jana’s unsteady handwriting – covered the walls of the gallery space and filled three itemized archival boxes. At first, ‘It Doesn’t Matter’ (2005–7) looked like an amateur archaeology project, or a statement about the disconnect between women and the world of tools. In fact, it is a touching meditation on art-making – mirroring both the practice of strict conceptual regimens and the expressionistic possibilities of artistic production.

In a separate room, an accompanying video documenting the artist’s collaboration with her grandmother reveals that the project was not a purely curative familial intervention. In this roughly two-minute film, Šedá depicts Jana – with her frazzled white hair and pale, doughy arms exposed through the sleeves of her pink muumuu – sitting at the breakfast table in front of a large rectangular sheet of paper, a thick black pen poised in her hand. Almost as soon as she begins drawing, her granddaughter’s questions begin: ‘Why are you drawing it from the side like that?’ she asks, like a harsh primary school teacher. ‘Why don’t you draw it from the front?’ It becomes clear that this is far from a therapeutic exercise or proof of the restorative power of art. Instead, we learn that the complete series of drawings is, in fact, a product of the young artist harassing her poor grandma about what – and how – she draws. After about a minute, in a strangled voice, Jana says that she feels ill and wants to stop. Though the exercise has successfully roused her grandmother from bed, it has, quite literally, turned her into the clichéd tortured artist.

Whether Šedá’s project is an effective rehabilitation programme or an exploitation of her grandmother is thrown yet further into question as the extent of the scheme unfolds: along with the hundreds of drawings are three unassuming booklets entitled ‘1 x daily before meals’ (2006–7). When I opened them, I realized they were full of typed questionnaires, like school quizzes, for Jana to complete according to a strict daily regimen. Some are designed to get Jana to recall details from her life: ‘How did liberation look in Lìšen? Describe!’ Others almost seem like dictatorial commands: ‘Name all the hospitals where you have been a patient!’ The old woman’s half-hearted, handwritten responses convey her exhaustion with the mental callisthenics her grand-daughter has designed. But even these brief replies add up to a stream-of-consciousness inventory of memories of a life lived. Ultimately, these books reveal all that would be lost to her grandmother’s silent depression if Šedá hadn’t persevered with her assignments. (Even if, toward the end, Jana was too sick to complete them.)

Seeing these half-empty booklets confounded my initial expectations for the work, and my thoughts about the artist herself. Were her efforts admirable or compulsive? Does the extent of the project reflect her determination to save her grandmother’s life, or is it a metaphor for the process of art-making? On one level, ‘It Doesn’t Matter’ functions as a commentary on the dangers of basing art on social participation; Šedá exaggerates the pitfalls of socially engaged works in which, despite the artist’s good intentions, the execution becomes overbearing or didactic. By collaborating with her own depressed grandmother, who bears the brunt of the work, Šedá also raises the stakes.

In an unpublished interview with her granddaughter, Jana declares that the only things that fill her ‘empty’ life are the television and her dog (she fails to mention Šedá). Her idea of being content is ‘doing nothing’, and the project’s title, ‘It Doesn’t Matter’, stems from her most frequent response to her granddaughter’s questions. It’s possible that Šedá’s project is a strategy for dealing with her fear of losing a family member. It’s also possible that Šedá saw her worst fears for herself realized in her grandmother’s inertia. If the work can be considered a determined programme against inactivity, against the fatalistic attitude that art doesn’t matter, it also reveals that this fatalistic attitude is what provides art with constant friction – the sense that it isn’t what we do that matters, but the determination to keep doing it regardless.