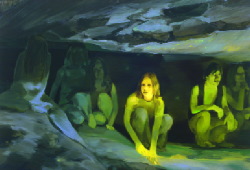 Kaye Donachie's recent paintings reek of ambiguity and a studied lack of clarity as regards the historical moment they may or may not depict. The six modest canvases here - painted in a tightly restrained range of pastel pinks, garish yellows and occasional dark greens or browns - record the apparently passive antics of a gathering of young people lounging about in bright, sun-splattered woods or the shady enclave of a low-roofed cave. Dressed in the casual apparel of the teenager or hippy, these tragicomic characters seem uncertain as to whether they should frown or smile. Are we witnessing a group of drugged-up, super-cool drop-outs from the recent past or glimpsing a future in which the only bits of technology required are a hammock and an acoustic guitar? Donachie leaves the viewer to work out both the historical and the moral contexts of these pictures. It's an ambiguity that is both productive and problematic, deliberate and yet a little too slightly adrift.

'Our typical response to a disrupting new technology', noted Marshall McLuhan, 'is to recreate the old environment instead of heeding the new opportunities of the new environment.' In Donachie's work we seem to be seeing one such historical moment, that of 1960s youth relishing its non-reliance on modern technology, returning instead to the simple safety of a purportedly timeless cave or glade. The sophisticated culture of the city is, in this reading, a straight non-starter for those youngsters brought up in such a world; one encounters, in the clothes and confident grimaces, a counter-cultural conceit, a post-1950s climate of easy optimism and indulgent, almost insolent, laziness. At the same time, however, one might readily regard these vignettes as portraits of a later generation, which is living out the last years of its teens coolly in tune with 1960s style yet devoid of that period's confident energy and exploratory aspirations. In either case, whether these are the children of the 1960s or their offspring, a return to nature asserts itself here as the only acceptable exit route from the murky mire of modern suburban living.

In this Thoreauesque refusal of cultural conformism, individuals with indeterminate expressions romp around a camp-fire quite oblivious to the broader order of things or, conversely (one imagines), all too conscious of what they are desperately trying to forget. A sharp sense of the tribal, of the integration of individual and group, comes across in these paintings, with such societal cohesion being here and there undermined by a lost, distracted or detached figure, sitting among the others but contemplating something the viewer of these works is not privileged to see. This isolation within the group, its deep-set divisiveness, is a sign that inside this little utopia all is not as it originally appears. The spartan pastoral setting is underpinned with something unpleasant, bitter and inept, a crude interruption into an otherwise elegiac estate.

Donachie's handling of paint is, at different points across the works, variously loose and tightly controlled. Figures sitting in bright sunlight lose their features in a dissolve that makes them look like ghosts, while the poses and geometry of other forms suggest the complicated solidity of Paul Cézanne or of pre-Cubist Georges Braque. The execution is intelligent, awkwardly elegant, appropriately concise.

The paintings' titles, like the pictures themselves, border on kitsch. Can't find nothin' I can put my heart and soul into and You've got to keep in mind love is here today (all works 2004) are, as verbal pointers, imbued with depression and doubt. One is unsure if they are intended to be ironic or merely descriptive of the material depicted. You still believe in me depicts the heads of three figures, a male and two females, the latter either side of the former, leaning on his shoulders. Whether the title represents the thoughts or one or all of this trio is again unclear. This openness is one of the difficulties of this display: looking, at first sight, as though it is proposing fairly overt inferences regarding the niceties of historical repetition, and of culture and nature as opposing but related forces, the show is, in the end, rather too ambivalently constructed. 'Epiphany', the exhibition's title, suggests spontaneous revelation and an acute spiritual shift from the mundane to the ecstatic; but how, finally, the artist regards such extremes is left without elucidation. This is disappointing and perhaps, if inadvertently, irresponsible, even if these works are, first and foremost, paintings rather than moralistic fables or blatant, table-thumping political tracts.