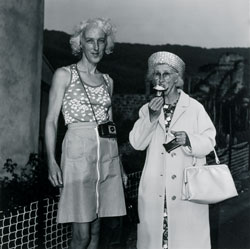 By the time, in the early 1970s, that Keith Arnatt stopped calling himself an artist and allowed that photography had more than a documentary relation to his practice, he had already established the act of vanishing as key to his modest and absurd twist on Conceptual tropes. In his ‘Earth Plug’ series (1967–8) he excised tidy chunks of turf, lined them with fibreglass and slotted them neatly back in the ground. In ‘Self Burial (Television Interference Project)’ (1969) he was photographed nine times as he apparently sank, feet first and stony-faced, into the earth. At the same time, with their deadpan take on the linguistic concerns of the era, his textual works explored the paradoxes of self-assertion, asking Is it possible for me to do nothing as my contribution to this exhibition? (1970) and blankly asserting, on a wall at the Tate, that ‘Keith Arnatt is an artist’.

Arnatt’s decision to begin calling himself a photographer was in a sense the starting-point of this exhibition of photographic work, ‘I’m a Real Photographer’, but he could hardly be said, in the earliest works shown here, to have abandoned the Conceptual rigour of his earlier work or its arch and telling humour. A series such as ‘The Visitors’ (1974–6) – in which he photographed tourists en route to Tintern Abbey, near his home – deflects the straight typology of August Sander to revealing and touching ends. The respectable visitors address the camera as they would for any day-trip snapshot – which is to say, in the mid-1970s, rather formally – while the series suggests that they are distinctly odd specimens. In ‘Walking the Dog’ (1976–9) the anatomizing logic of the series seems straightforward at first – each image a head-on portrait of walker and pooch – until you notice that Arnatt has somehow coaxed both owner and pet to look at the camera at the same instant.

In other words, if those series are about photographic convention, they are also undercut by comedy: it’s impossible, for instance, to look into the eyes of dog and owner and not wonder whether, as the cliché has it, they’re starting to look alike. There is always this element, in Arnatt’s most reflexive studies of the photographic image, of a humour I suppose you would have to call peculiarly English, were it not in fact more localized and eccentric than that. Take his first colour series, ‘Miss Grace’s Lane’ (1986–7), where weeds and waste ground are captured in golden-hour light and composed as parodies of paintings by Samuel Palmer. In one image the ruderal vegetation has been accidentally half-wrapped by Interflora packaging; in another, a small watering can sits by the scrub, as though some dutiful local has been tending the wasteland.

In a way, Arnatt’s eye for such details is more compelling – and actually, in its visual and verbal punning, more in keeping with his original Conceptual concerns – than the manifest ideas at work in his later major works. The several series devoted to rubbish, for example, work best when there is a bathetically self-conscious joke at work, as in ‘Canned Sunsets’ (1990–91), where the bottoms of tin cans sink into horizons made of blurred garbage. The more visually ambitious ‘Pictures from a Rubbish Tip’ (1988–9), for all its lurid or glaucous assertion of the painterly texture of rotting meat, mouldy bread, slimy plastic and wormy tangles of old spaghetti, seems to stop there – at the point where rank content and ravishing colour simply flip back and forth in the mind’s eye. By contrast, a series of pin-sharp close-ups of ‘Dog Turds’ (1990) – all of them standing vertical, like little fibrous monuments or statues – plays similar games less picturesquely.

‘I’m not and never have been authentic’, claimed Arnatt in a recorded interview that was installed here alongside representative lecture slides from his teaching career: Palmer, Caspar David Friedrich, Bernd and Hilla Becher, Larry Sultan and Mike Mandel’s Evidence (1977). ‘I’m a Real Photographer’ suggested a career devoted to analysing various passages from photography to painting to concept, with a remarkably capacious sense of what was worth recruiting, in terms of subject and influence, to that end. As in ‘Notes from Jo’ (1991–4), a series of photographs of his wife’s domestic missives (‘where are my Wellingtons, you stupid fart?’), his distinctive skill has been to discern the visual and conceptual possibilities of stuff so close to hand that its strangeness is almost unseen.