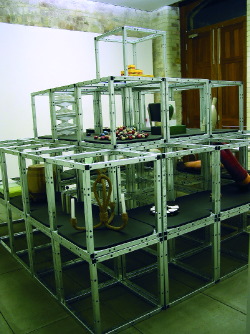 In Jorge Luis Borges' short story 'Funes the Memorious' (1962) the title character invents a new system of numbering in which he does away with the digits zero to nine and gives every discrete quantity its own discrete noun: 'In place of seven thousand thirteen, he would say (for example) "Máximo Pérez"; in place of seven thousand fourteen, "The Railroad"; other numbers were Luis Melián Lafinur, Olimar, sulphur, the reins, the whale, the gas, Napoleon, Agustín de Vedia.' Borges' point here is that quantities are so specific that it's absurd to speak about, say, 12 of this or 12,000 of that in the same numerical language. Far better to be like Funes, and to employ such precise terms as 'The Negro Timoteo' or 'meat blanket.'

Occupying most of One in the Other's floor space, Keith Wilson's sculpture Z is for Ziggurat (2003) was an alphabet of sorts, but one that was - like Funes' numbering scheme - so lacking in systematic logic, and so unabashedly hermetic, that it was effectively dysfunctional. The piece took the shape of a stepped pyramidal tower, of the type built by the Mayans or - much later - by the Neo-Brutalist architect Denys Lasdun at the University of East Anglia, Norwich. Norwich is an agrarian town, and that, perhaps, is why each of the piece's 61 cuboid, frame-like units was constructed from all-weather galvanized steel, a material familiar to anyone who's ever visited a livestock market or vaulted a farmyard gate. Inside 26 of these units (which seemed to remember, impossibly, the steamy blast of cow's breath on their cold, hard bars) stood sculptures that corresponded to different letters of the alphabet, supported on bevel-edged bits of blackboard. But while the blackboards suggested pedagogy, Wilson's lexicon - which included a drift of dishwasher salt, a waxy ball of sheep's wool and three grubby plastic sprockets stacked like Constantin Brancusi's Endless Column (1918) - was impossible to learn in the way that one would learn, well, one's ABC. Humming with possible meanings and a muted, pathetic beauty, most of Z is for Ziggurat's parts could, with a little thought, a little poetic licence, represent most lexical signs.

The only exceptions in this slippery game were the pieces that represented the letters 'A' and 'Z'. Sited in a unit that provided a door to the ziggurat proper, the 'A' sculpture was fabricated from a child's football, fitted with a drinking horn and a divining-rod-shaped piece of antler. Printed with pictures of gambolling bunnies, the ball bore the legend Kleintierzucht: Ein Schönes Hobby (Breeding Small Animals: A Fine Hobby), as though the connection between weekend rabbit husbandry and a kids' jumpers-for-goalposts kick-about was not only natural but also blindingly obvious. If the 'A' sculpture spoke of animals, amateurism and associative leaps, the 'Z' sculpture spoke of the ziggurat on whose apex it stood. Here Wilson's large pyramid was remade, in miniature, from 61 empty boxes, which once contained cover glass for photographic slides. Nodding at ideas of reduction, reproduction and framing, this tiny tower foregrounded the fact that many of the sculptures in Z is for Ziggurat were replays of Wilson's earlier works. In a sense this transformed this show into a de facto retrospective, albeit one in which the retrospective's rules (chronological progression, the presence of original works) were fatally undermined. This, though, was part of the piece's point. It appeared to offer a fix on Wilson's art, but what it offered, in reality, was alphabet soup.

Z is for Ziggurat pointed out - post-Michel Foucault - that taxonomies are bad news, but this was only a launch pad from which Wilson explored the peculiar stuff of sculpture. To anyone looking at the piece, many of the objects that inhabited the pyramid had been diverted from their original functions, but - there on their blackboard supports - they made sense in a way that had nothing to do with functionality or narrative or language, and everything to do with their own object-hood. Take, for example, the wireless dartboard, or the faded molecules of an outmoded scientific model, or the ring of neon-dyed dental casts, chattering to each other like members of a suburban book group. One might read meaning off these things (in the way one might read meaning off, say, a Ghirlandaio fresco, or a George Eliot novel) but it might be better to think of them, as Funes would, as facts, as being unassailably themselves. That, after all, is what all the best sculptures are.