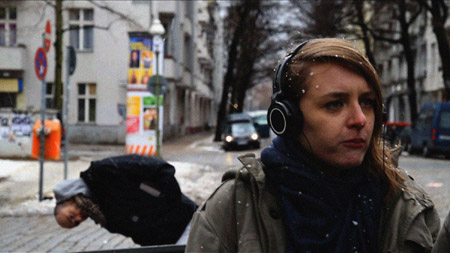 A few years ago, Keren Cytter’s narrative-based video works suggested a fierce and experimental mind at work. Today, I can’t say they have the same impact. Cytter’s keen ability to marry avant-garde strategies of distanciation with the schlock of television melodrama – as if Samuel Beckett had directed an episode of Sex and the City – remains her main strength. The gender politics remain incisive, and the monologues are still witty and acerbic. Increasingly, however, the Berlin-based Israeli artist appears to borrow too lazily from Bertolt Brecht and Jean-Luc Godard: characters regularly break the fourth wall; stilted dialogue circulates like Chinese whispers; narratives eddy and tangle with inevitable confusion. Worse still, Cytter’s theatrical-dance-video performance created in collaboration with D.I.E. Now (Dance International Europe), History in the Making or the Secret Diaries of Linda Schultz (2009), was a mess. She has also written several books that, unhappily, add little to either the world of literature or of art. There is a fine line here between deliberate banality and unalloyed self-indulgence.

Cytter’s concurrent exhibitions at Pilar Corrias Gallery and the David Roberts Art Foundation (DRAF) comprised a single 32-minute video work, Avalanche (2011), which was split into four shorter pieces. The protagonist, Simon, flits schizophrenically between affection and misogyny. He’s a bully, a disposition explained with Freudian ease in Ducks & Women, one episode that was shown at Pilar Corrias: we watch a trip back in time to Simon’s youth, to a piano lesson in which a pinch-mouthed piano teacher torments him with the refrain ‘No! You are doing something wrong, something really wrong!’ Later, Simon conflates ducks with women: he hates ‘the way they walk, the way they talk, the way they eat’. He reads Dostoevsky’s The Brothers Karamazov (1880) and claims, ‘one page of this book is worth a year in therapy’. The second video here, Francophile, reveals more about the girlfriend (whose name is unclear), as she blankly repeats snippets of recently learnt French. Simon, who is played by two similar-looking actors (a trick borrowed from the nouvelle vague directors), looks louche in a leopard-print dressing gown. The couple have sex (the sound is replaced by a sweeping, filmic soundtrack), and drink coffee – a cup of which Simon later throws at his girlfriend’s face.

Shown at DRAF, Chain Review was filmed on a Berlin street with a roaming camera that drops in on conversations between atomized individuals: a couple who are in the process of splitting up; a youth clutching a disco ball; two men considering, somewhat incongruously, moving to Berlin; and another man delivering a TV-style product review of the Canon EOS 7D digital camera. The couple appear again in Lonely Planet, where they perambulate in circles around an apartment, have sex, make more coffee, argue again and read more Dostoevsky. On a formal and narrative level, the four videos are mirrors of each other: in Chain Review snow falls on the wintry street; in Lonely Planet, Simon sets fire to the The Brothers Karamazov, which forms billowy flakes that rain down inside the apartment (cinders of burnt-out passion, no doubt). Dialogue migrates between videos too: we repeatedly hear how the girlfriend wants to go to the gardens of Kyoto, only for Simon to retort that it is ‘too far, too long, and I am too tired’.

Avalanche is stronger than the sum of its parts. The repetition of language and scenarios has a self-supporting effect that’s quite mesmerizing, and it is certainly sleeker than Cytter’s earlier videos. Nevertheless, repetition does have its downsides. Cytter uses the same actors, apartment and filmic tropes over and again: people are forever fucking, making coffee and reading literature. More problematically, this work depends upon an air of experimental disassembling which, over the years, has itself ossified into a cliché – Cytter seems to have dug herself into a style that looks experimental, but is, perhaps, its opposite. How to escape this rut? Handing the reins to others is one option: from mid-February, Cytter invited artists Willem de Rooij and Falke Pisano to select and change the content of her ongoing exhibition at DRAF. But I doubt that this provides a convincing a solution. Indeed, it could be read as little more than a disingenuous gesture towards collaboration that is, in fact, unabashed self-aggrandizement. It’s a difficult task to escape the shadow of one’s influences, but Cytter’s is a practice that needs to do so.