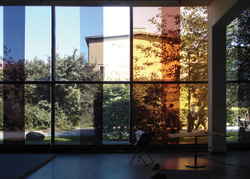 For the 2005 Göteborg International Biennial for contemporary art the Brazilian artist Lúcia Koch created a body of works collectively entitled Light Corrections (2005). By applying to all the windows and skylights of the venue, the Göteborgs Konsthall, the type of corrective filters normally used for cinema, she created a suite of subtly altered natural light sources of varying intensity and tonality. These optical adjustments had an effect on the way the viewer experienced not only the more utilitarian areas of the Konsthall (such as the entrance hall, corridors and café) but also the gallery spaces themselves, where the works of the other artists in the biennial were on show.

Having carefully negotiated with her co-exhibitors and with the Konsthall, Koch set out to produce the ideal light conditions for each work. For Adrian Paci’s Cappella Pasolini (Pasolini Chapel, 2005), for example, she used a golden-yellowish Rosco filter to illuminate a work that paid homage to the quality of light that characterizes the films of Pier Paolo Pasolini. For Miriam Bäckström’s film projection of Rebecka (2004), on the other hand, she chose a neutral-density filter of just 12 percent transparency to reduce the luminosity and intensity of the projection without changing its hue. And whereas a large window high above the Konsthall’s central hall appeared to be filled with late-afternoon sunlight all day long, the large floor-to-ceiling windows in the Falkhallen Gallery acted as a screen for several bands of superimposed filters, creating the illusion of multiple views of the world outside, perceived at different hours of the day and under a variety of atmospheric conditions. This ‘light collage’ highlighted aspects of which visitors are normally only faintly aware when strolling through an exhibition: the way light brings architecture to life, the relationship between light and time, and the perception of colour – all key components of Koch’s experiments with architectural space.

Light Corrections also focused attention on another important element in Koch’s work: the concept of negotiation, the process of reacting directly to a particular spatial situation. Tailoring a piece of architecture to the specific needs and desires of its users requires sensitivity and an insight into the way a given building is used. Many of Koch’s works have taken this process as their point of departure, however, as in her ongoing project to modify homes in Jardim Miriam, a suburb of São Paulo, or in her project at Istanbul’s Cag?alog?lu Hamam, undertaken for the Eighth Istanbul Biennial. Turkish Delight (2003) comprised a series of subtle and sensitive modifications to the famous choreography of natural light entering the interior of the bathhouse. Without interfering with the functionality of the baths themselves, Koch changed the tonalities of light throughout the building, including in the segregated female and male bathing areas. Again the project involved numerous sessions of delicate negotiation in advance with the hamam’s owners and staff. Whether intervening in private dwellings or in public spaces, however, this focus on the dialogue of accommodation and compromise between artist and occupant seems to suggest an optimistic belief in the possibility of changing one’s spatial reality via the most inconspicuous of means, the ability to personalize the perception of space simply by changing its main catalyst: light.

For the 27th São Paulo Biennial, Koch created the large spatial sculpture Exhibition Room (2006). After taking the exact dimensions of the walls surrounding the exhibition space allotted to her, she built a cube of ordinary perforated pressboard panels, painted white. With their regular grid of tiny holes, the square panels were fixed to each side of a hollow support structure, creating a visible surface that comprised countless apertures, through which the radiant natural light of the pavilion’s expansive windows filtered. The holes of the first plane aligned with those of the second to create an enormous variety of radiant intersections and eye-popping optical patterns, according to the position of the viewer. Seen from a certain distance, large numbers of overlapping holes seemed to combine to form larger, illuminated circles. As the viewer walked about the space, however, one circle would appear to fade away, only to be replaced by new ones, depending on the angle. Although simple to achieve in practical terms, the resulting hallucinatory effect was visually complex but also fun, like a walk-in Bridget Riley. The walls seemed to respond to the visitor, as if the surrounding surfaces were a chimera, a figment of the eye and the imagination.

The subjectivity of perception, exemplified by the presentation of a simple yet captivating optical phenomenon, offers another interesting reading of Koch’s work. Returning again to Light Corrections, it is worth recalling Maurice Merleau-Ponty’s Phenomenology of Perception (1945), in which the philosopher stresses that colour is a fundamental constant and introduces the concept of ‘memory colour’. Merleau-Ponty exemplifies this objectivist idea of perception by stating that a brown table remains a brown table under any light conditions and at any distance. Koch’s works argue the opposite. On a more abstract level of interpretation, her Light Corrections refers to much more than its own museological conditions. Her scheme for modifying natural light brings the individual viewer back to the centre of phenomenological experience: to the perception of light, of time, and of the self in space.