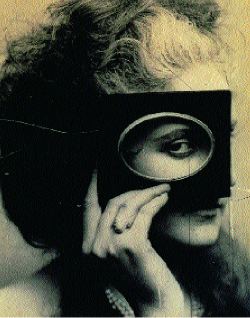 A voluptuous woman with a powdered coiffure peers through a velvet frame, which highlights her ambiguous, seductive gaze. The same model appears dressed as a palpably sexual Queen of Hearts, while other images recall classical statuary, as she lifts voluminous skirts to reveal bare, graceful legs. These photographs depict Virginia Verasis, Countess de Castiglione, a renowned 19th-century beauty who enjoyed a fleeting moment of success on the Parisian social scene. She attempted to immortalize her beauty through several hundred portraits commissioned from the studio photographer Pierre-Louis Pierson between 1856 and 1895. At the time of her death she was mentally ill and had lost her teeth and hair, but was planning an exhibition entitled 'The Most Beautiful Woman of the Century'. The work Castiglione produced is not only an intriguing use of photography to shape a public persona and maintain a form of personal diary, but also the disturbing document of a creative effort directed toward a profoundly inhuman goal.

In the catalogue for 'La Divine Comtesse' the exhibition's curator, Pierre Apraxine, compares Castiglione's project to the work of such artists as Cindy Sherman, Sophie Calle and Yasumasa Morimura. In so doing, he is careful not to cast her photographs as a direct antecedent for their more formally developed and self-conscious work; he fails, however, to address the role her situation as a woman may have played in fostering her narcissism. Similarly, historian Xavier Demange, who also contributed to the catalogue, describes making oneself into subject and object before the camera 'an eminently modern approach', but Castiglione objectified herself to such an extent that her body was unselfcon-sciously equated with marble and paint, and, in fact, she painted over many of her self-portraits with gouache. In one, dressed as an 18th-century Marquise, she appears to have stepped out of a canvas by Fragonard.

For Castiglione the photographs were malleable reflections, constantly reaffirming her beauty and mystery, a spark of which she seems to have believed remained to the end - for, if none of it remained, who had she been? As Simone de Beauvoir wrote of the narcissistic woman who seeks an impossible doubling in which self addresses self: '... knowing and making herself object, she believes she really sees herself in the glass. A passive and given fact, the reflection is, like herself, a thing; and as she covets female flesh, her flesh, she gives life through her admiration and desire to the imaged qualities she sees.' Many of Castiglione's most striking photographs incorporate mirrors, such as The Opera Ball (1861 -67), in which her face is reduced to a dark, smudgy reflection above the luminous pyramid of her swansdown-edged cloak. When she retreated from society in 1878, she banned mirrors from her home, but they resurface in the images produced during her final burst of creativity. In one late photograph she bares her arm before its reflection, as if in a hopeless attempt to rekindle her self-love, but her expression is inscrutable. Whereas in the earlier portraits she appears to be relatively in control of the image she projects, towards the end of her life she seems confused and defenceless.

In all of the portraits Castiglione's fear and alienation are apparent, especially in images where she imagined herself a drowned virgin or a woman fleeing from a fire. While she enjoyed playing doomed heroines, she instinctively attempted to hold death at bay, through the studied spontaneity of her poses and gestures; through costumes that resurrected her own past or invoked mythical figures; and even, in a bizarre series from the mid-1860s, through the substitution of her son's childish flesh and flowing hair for her own. Such efforts are, in the later pictures, accompanied by an acknowledgement of her own mortality. In 1894 she had her feet photograp-hed from what might be a corpse's point of view, grimly labelling the image with one of her more suggestive notations, 'The foot/The amputation of the Gruyère'. Heightening the macabre aspect of the entire project is the foxing that now mars many of the photographs. As images and objects, they all reek of death.

This morbid undertone contrasts dramatically with the radiant carnality Castiglione sought to embody in her photographs, whose creation was for her - a woman praised from childhood not for her intelligence and imagination but for her physical appearance - both an aesthetic activity and a deeply unsatisfying, self-destructive addiction. Rescinding before the camera's devouring lens what Roland Barthes defined in Camera Lucida as the 'political right to be a subject', with each image she allowed a little more of her subjectivity to be extinguished.