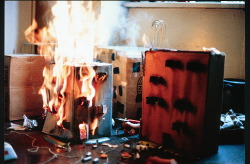 It is easy to become over-romantic when thinking about the early photographic experiments of Joseph Nicéphore Niepce and Louis-Jacques-Mandé Daguerre in the 1820s and '30s. Both men seem to have been more enthralled by the science at hand and impressed with the potential financial rewards of their inventions than by photography's impact as an art form. But the lure is of thinking about the first people to witness the photograph's incredible illusionism. This same nostalgia is also apparent in stories about turn-of-the-century filmgoers who were so shocked by the realism of cinema that they were afraid the moving train was going to continue right off the screen. A semblance of what they must have felt can be imagined when you watch a photographic image develop in a chemical bath, an experience that stands in opposition to the sophisticated, media-savvy viewing of today, when belief is suspended with a nod and a wink.

Despite photography's mechanical and chemical links to its subject matter, it is its ability both to document and to mediate reality that packs the more powerful punch now. A photograph testifies to the truth of what it pictures - this existed, this was - and reveals itself to be a poor substitute for that reality: without body, vulnerable to deterioration and misrepresentation.

The very nature of photography - that it is and is not continuous with its subject - introduces doubt as much as it provides evidence. And it is this duplicity that has attracted artists to photography as a medium for their own ends, pushing beyond the utility and relative objectivity of documentary photography and journalistic reportage. Curated by Douglas Fogle and including over 200 pieces by 57 artists, 'The Last Picture Show: Artists Using Photography, 1960-1982' takes up this point and presents key artworks from a two-decade period which saw photography thoroughly challenged. In fact, the exhibition reads like a greatest hits compilation from the era. Making photographic vision self-conscious and self-aware was the aim of many artists during this period, whether it be by the relatively simple juxtaposition of photography and painting, as in Giulio Paolini's Delfo (Delphi, 1965), a photographic print on canvas showing the artist centred behind the supporting crossbars of a canvas stretcher, or of photography and sculpture, as in Sigmar Polke's Polke's Peitsche (Polke's Whip, 1968) and Robert Watts' plastic transparent Portrait Dress (1965), both of which incorporate black and white photographs into the named items. Another approach was photographing in an unspectacular way commonplace objects from everyday life, as in the books of Ed Ruscha, Sol LeWitt and Hans-Peter Feldmann, or the typologies of Bernd and Hilla Becher. By turning the camera on themselves, artists stressed the links between performance, the body in space and the photographic document of specific, prescribed acts: Charles Ray propped against the wall with a wood plank, Valie Export articulating her body into geometric shapes mirrored in the urban landscape, Richard Long wearing a path into the ground by walking, Eleanor Antin carving/dieting her body to an ideal form. Many of these artists complicated our understanding of photography's biased relationship to its subject by constructing and photographing their own built environments: Peter Fischli and David Weiss' 'Wurstserie' (Sausage series, 1979), James Welling's mock sublime seascapes of tin foil, Laurie Simmon's doll-house creations, and the constructed identities of Cindy Sherman, Andy Warhol and Adrian Piper.

The vocabulary of artists using photography today owes a large debt to these investigations. The death-knell quality of the title 'The Last Picture Show' suggests that, since so much has already been discovered, photography can't show us anything we don't already know. I prefer to see the collection as a primer, presenting the broad range of conceptual and material strategies available for artists to explore our hyper-mediated world. One image-sculpture in particular stands out in this regard, Joseph Beuys' Enterprise 11/18/72, 18:5:16 hours (1973), a diptych comprising a box camera and a black-and-white photograph picturing Beuys and his young family watching an episode of Star Trek. With the television mounted high on the wall and the chairs all facing forward in staggered procession for better viewing, their small, stark apartment resembles a hospital waiting room. And there Beuys sits, dressed in familiar uniform of vest, white shirt, jeans and hat, hunched in the back of the room watching with everyone else Captain Kirk command the screen. The incongruities presented are clear and dynamic: crafted persona meets father and husband; family togetherness meets isolated, hypnotic viewing. Myth meets reality in the space of the photograph and neither settles comfortably, forcing us to move back and forth between the two. Its historical nature aside, the exhibition reminds us that photography continues to be a significant tool in developing critical awareness and visual literacy.