In his new book Jacques Rancière discusses the democratization of vision 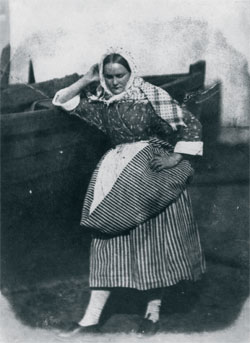 In the sprightliest of the several photographs of Newhaven fisherman’s wives taken in 1845 by David Octavius Hill and Robert Adamson, the young subject, Jeanie Wilson, is a quite alarming contention of monochrome designs. With her chequered shawl, delicately spotted tunic and vividly striped butcher’s apron, she has stratified herself into at least three women (she may be a fourth, less gainly, from the knees down: her thick stockings have begun to slide). The photograph has often been taken as an early instance of the medium’s discovery of the everyday, of a technology training the eye, for the first time, to accept beauty in the least auspicious instants. When the French philosopher Jacques Rancière refers to this image in his recent book The Politics of Aesthetics (2004), it is to insist on another, subtler story. The entry of the ultra-ordinary into art (what critic Thierry de Duve, writing of the same period, calls simply ‘whatever’) is not an invention of the technology but the intensification of an already existing interest: a ‘disposition of the sensible’, devoted to the democratization of vision.
It is a long time since we heard the advent of modern art (Rancière in fact rejects the notion of an aesthetic modernity) expressed in these terms. They are, says the philosopher, the original terms in which, say, the descriptions of physical minutiae in the novels of Gustave Flaubert were received. Put like this, all later talk of the alienating aesthetic shock of such moments begins to look beside the point, the discourse of crises and ends of art a diversion from this initial recognition of precisely what it is that the new aesthetic makes visible. Aesthetics, for Rancière, is a matter of dramatizing what can be seen and what stays hidden, what can be spoken and what must be suppressed. If his recent writings suggest a ‘return’ to the notion of the aesthetic (after its occlusion in the protracted controversy of Postmodernism), it is to a field considerably expanded. Rancière, who has spent a good deal of his intellectual career reconstituting the lost history of worker intellectuals (the ‘ignorant schoolmasters’ of an earlier book), effects something similar for art: it is, he says, what allows us to understand a specific kind of political exclusion.
Art, Rancière reminds us, has long been imbricated in the delimitation of the polis. For his republic Plato constructed a hierarchy of those who make things that the community requires: shoemakers are in, sculptors out. The artist, dedicated to imitation, is therefore also irremediably doubled, alienated, not to be trusted. The entire political structure depends, says Rancière, on the notion that each individual fulfils only one task; the artist scandalously attempts two: to produce and to represent. Of course, the artist’s banishment from the political community is also the impoverishment of those included. It’s not simply that they are denied the consolations of art, but that they are barred from doubling themselves in the manner of an artist. This is the state of affairs to which aesthetic revolutions have historically responded. Friedrich von Schiller, for example, in his On the Aesthetic Education of Man (1795), inveighs against the increasing specialization of modern life, the sundering of intellect from sensibility. The only cure for this abstracted state is the moral balm of Art.
In fact, argues Rancière, the history of artistic innovations (and their accompanying political valencies) has never been quite that simple: they have involved, for as long as the aesthetic has been a discrete category, a hasty disparaging of the aesthetic itself. In a lecture entitled ‘The Emancipated Spectator’ (delivered at the Fifth International Summer Academy in Frankfurt, 2004) he traced one genealogy of artistic attacks on aesthetic experience. Within the history of theatre the role of the spectator has always been ambiguous. There could, of course, be no theatre without spectators. But the last thing theatre wants is a spectator who is only a spectator: to look is traditionally to be merely passively engaged. Instead, the spectator must be remade, re-educated, trained to substitute action for viewing. This is what some of the greatest drama requires: spectators who, militantly, refuse spectatorship and start to act. This would be, for instance, the shared desire of dramaturges as different as Bertolt Brecht and Antonin Artaud. But such demands are actually profoundly undemocratic; they depend, like the relation between teacher and student that Rancière has critiqued in the past, on the notion that all knowledge is on the side of the actor, only gaping ignorance on the side of the spectator.
Which is not to say that Rancière has in mind some weakly ‘democratic’ art, in the manner of those who imagine that ‘élitism’ is a matter of any actual import. A democratic aesthetic might well make for the most difficult art imaginable (or, like democracy itself, as yet unimaginable). What matters is the assumption of an equality – of ambition, of intelligence – between artist and spectator. Hence, perhaps, Rancière’s engagement, as in his book Le Destin des images (The Destiny of Images, 2003), with works in which he sees the potential for productive blurrings of media and crossings of genre. He sees in artists’ films, in photographers who are also sculptors, filmmakers who are really historians, the embodiment of a dictum according to which ‘the power of a mode of thinking has to do above all with its capacity to be displaced’.