Law of the Land

Bamako, a new film from Mali, stages a fictitious trial of the World Bank and the International Monetary Fund 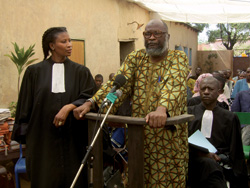 The district of Hamdallaye, Bamako, Mali. In a sun-baked courtyard a trial is in progress. Defence and prosecution lawyers stand before a solemn bench of judges. An audience of 30 or so witnesses and observers quietly watches the proceedings unfold. A camera crew and sound recordists document the witness testimonials and the carefully constructed arguments of the opposing legal advocates.

The defence lawyer, dressed in formal legal robes but oblivious to the heat, reads from his notes in crisply enunciated French. ‘In an inevitably open world we must civilize globalization and give it a meaning. What do you think of those words? Can progress be made or not during the globalization process? For example, if the standards enforced by the ILO [International Labour Organization] were made general, would that be good or bad? Or would that merely oppress the Africans even more?’ ‘I strongly oppose your starting-point, “the open world”,’ replies the middle-aged African woman at the witness stand. ‘We don’t live in an open world, Mr Rappaport. The words you just read provide an eloquent answer to the questions that you ask. If globalization needs to be improved and civilized, that means it “decivilizes” and “dehumanizes”. Today we see Africans who opt for emigration, who are economic refugees, arrested, handcuffed, deported, humiliated and sent back home. How can you claim, given that terrible situation that shocks the whole world, that we live in an open world? It’s clearly open for whites, but not for blacks.’

There are no prisoners in the dock; there is no individual present whose fate is held in balance by the final decision of the tribunal. The facts, figures and opinions exchanged seem a little academic for a trial held in what seems to be someone’s backyard. Yet the crimes in question have resulted in death and destitution; directly or indirectly, blood has been spilt and lives have been wrecked. So who stands accused? On trial are the World Bank and the International Monetary Fund (IMF), financial instruments of Western neo-liberalism held to account by spokespeople for African civil society. The charge? Causing and perpetuating Africa’s poverty, its economic debts to the First World, its famine, illiteracy, stunted development, wrecked infrastructures, civil war and, most of all, the continent’s inability to benefit from its own wealth. As Aminata Traoré, former Malian minister for culture and one of the witnesses for the prosecution, states: ‘I am against the fact that Africa’s main characteristic in the eyes of the world is its poverty. Africa is rather the victim of its wealth.’

These fictional court proceedings form the structural spine of Bamako (2006), the extraordinary new film by Malian director Abderrahmane Sissako (Life on Earth, 1998; Waiting for Happiness, 2002). Filmed in the courtyard of the house in which Sissako grew up (alongside as many as 25 relatives), the trial takes place amid the ups and downs of everyday community life in a run-down area of Mali’s capital. As Africa’s representatives dance the point-counterpoint of legal advocacy with the World Bank and IMF’s spokespeople, a young couple – Melé and Chaka – are breaking up. Melé is a singer in a local club (her gently rousing performances of ‘Naam’, by Ghanaian Afrobeat legend Christy Azuma, bookend the film), and Chaka is unemployed. Their little girl lies sick in bed as the couple’s relationship disintegrates. Melé leaves the house each day with talk of moving from Mali, and Chaka drifts, seemingly unable to drag himself out of an increasingly consuming depression. Local women dye clothing, a gun goes missing and a wedding takes place. These everyday micro-dramas are thrown into sharp relief by the comparatively abstract confrontations embodied in the trial taking place in their backyard; arguments seemingly too distant to hold any immediate grip on the local people going about their daily chores.

Bamako is not an easy film to place. It contains some dreamlike passages – a group of men walk through the Sahara on their way to what they hope will be a better life in North Africa and beyond; a Spaghetti Western film shoot-out, watched on television by the residents of the house, serves as a strange interlude (or court recess) for the film – yet the judges, lawyers and witnesses all play themselves. With this in mind, the trial itself can be seen as not so much a work of cinematic fiction as a speculative discussion or workshop in which arguments are tested or rehearsed. It would be easy to compare Bamako with antecedent examples of politicized cinema in the late 1960s: Jean-Luc Godard’s One Plus One (1968), for instance, or Peter Whitehead’s half-fiction, half-documentary The Fall (1969). Yet Bamako arguably has more in common with the tenets of ‘third cinema’, as outlined by Latin-American filmmakers Fernando Solanas and Octavio Getino in their manifesto Hacia un Tercer Cine (Towards a Third Cinema, 1968). Solanas and Getino advocated that filmmakers in underprivileged or economically dependent countries move away from Hollywood-style entertainment models (‘first cinema’) and auteur film (‘second cinema’) towards ‘a cinema of decolonization’ – one that can act as a repository of oral histories but also generate political awareness, with potentially revolutionary social consequences. In sub-Saharan Francophone countries it was not until the early 1960s that national film industries began to emerge: the first feature-length film made in sub-Saharan Africa was Sembene Ousmane’s La Noire de… (Black Girl), in Senegal in 1965. Francophone African cinema developed at a faster rate than cinema in the continent’s English-speaking countries, not least because of the British colonial and post-colonial policy-makers’ lack of enthusiasm for encouraging indigenous African film. Directors such as Ousmane and, later, Mali’s own Souleymane Cissé developed approaches to film that sought to deal with issues facing modern Africa and wrestled control of Africa’s self-image from the hands of the infamous Colonial Film Units that had imposed visions of a Western lifestyle on the countries in which they operated.

Sissako’s film gives voice to those whose lives have been directly affected by the ‘structural adjustment’ programmes that were imposed on debt-ridden countries as a way of regulating their repayments. Essentially these policies – described by one of the film’s witnesses as ‘imposed destitution’ – dictated to developing countries how they were to manage their budgets, but largely resulted in the suppression of state subsidies and the erosion of public services. Nationalized companies were privatized and, as a result, the management of infrastructures and national resources such as water, electricity and transport has, in Sissako’s words, been ‘carried out in the interest of rich countries’ multinationals’. He also points out that ‘most official reports indicate that the Very Indebted Poor Countries are poorer today than they were 20 years ago’.

Bamako does not paint a sentimental portrait of Africa; it features no images of doe-eyed children in need of charity from the West and no shots of beautiful, sweeping landscapes and wild animals roaming free. The Spaghetti Western scene, for instance – entitled ‘Death in Timbuktu’ – depicts a group of thuggish outlaws bullying terrified townspeople. Sissako made some of these characters African in order to point out that ‘the West isn’t solely to blame for Africa’s woes […] a large portion of the African élite is party to the West: they’ve never had the courage to act in favour of changing things because each person is only looking out selfishly for their own interests’. The witness testimonials are impassioned yet carefully articulated; the 2005 G8 debt relief is accused of being ‘a false cancellation’ purely benefiting the governmental forum’s own reputation; debt is viewed as a form of colonialism, for ‘a country without communication, without transport, cannot be called a sovereign nation’. Ultimately, the film suggests that the World Bank is governed not by murderous instincts but by the cold, objective logic of unbridled capitalism. Towards the end of the film Zégué Bamba – an elderly witness who earlier in the trial was ordered to sit down and wait his turn before speaking – stands and delivers a piercing, beautiful song. Bamba’s testimonial is sung in a local dialect that is left untranslated: a powerful act of refusal in a film that paints a grim picture of a privatized world.