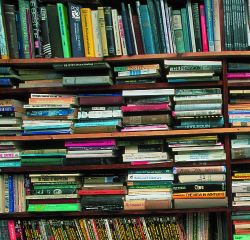 Interactive art, especially in its high-tech, fetishist variety, can frequently leave you feeling more intellectually and emotionally passive than much supposedly autonomous work. Often you feel treated like a chimpanzee, encouraged to perform menial tasks to reach the banana. If 'interactivity' leaves you cold, perhaps you will empathise with its neglected sibling: what the Austrian Philosopher Robert Pfaller has termed 'interpassivity'. 1

Pfaller's notion was originally inspired by Slavoj Zizek's observation that the canned laughter of sitcoms doesn't so much trigger our own laughter as substitute for it. Exhausted after a hard day's work, it is as if we delegate even the passive enjoyment of laughing. But the prime example of interpassivity is the way many people use their video to record more films than they could ever watch. Strangely, this doesn't necessarily leave you unsatisfied: whether the tapes are neatly sorted on your shelves or piled up, unlabelled, beside the TV, you can enjoy a sense of relief that you didn't miss a particular art-house film or a certain documentary. While you were working into the small hours, the VHS watched the film for you: you delegated the enjoyment and edification to the video recorder in order to be able to remain active.

The computer, combining production and consumption under one roof, is, of course, the perfect medium of interpassivity: while you write that important text, in the background it sorts myriad newsgroup messages you will never read into compartmentalised mailboxes; downloads software you will never use; and stores pictures from your digital camera which you will never look at. Of course, you could if you wanted to.

The shy boy-next-door in American Beauty (1999), Ricky Fitts (Wes Bentley), uses his camcorder to filter the world: it enables him to be a functional member of society while recording hundreds of hours of 'everyday beauty' - more than he could ever watch. He conceals his dope-dealing from his Nazi memorabilia collecting father by hiding his stash behind the video cassettes. This is an allegory of interpassivity, a quotidian cross between fetishism and compulsive behaviour: your active working life is a cover-up for your 'true' passive desires that reside in the machines and objects which process information you hardly use.

Interpassivity is usually, but not always, a facet of collecting. This is exemplified in a slightly uncanny story I heard recently. For some time, a friend's father had been enthusiastically filming his grandson with a new video camera, but it turned out that he had never changed the tape, thus erasing every single hour he had recorded with the following one. The father, technically naïve, claimed he thought that the tape could somehow store all those hours and hours of filming. But it dawned on my friend that his father had never really intended to keep the footage he had shot - as if it were meant only to be recorded but never watched. The interpassive desire was to take part in family life without having to show affection, using the camera as a shield and recording as an excuse, as if his real desire was to eliminate these 'memorable' moments.

'People take pictures of each other just to prove that they really existed', the Kinks sang in 1968. And if that was the Existentialist age of interpassivity, we have now reached the virtual: interpassive people don't have to read, watch or listen to the information proving someone or something exists - they just need to know that information about that existence exists. You could update the Marxist notion of commodity fetishism and say that interpassivity is information fetishism: you don't know whether you'll ever use it, but enjoy having it anyway. In the old days, a copy of Proust's In Search of Lost Time sitting on the shelf suggested that someday, when you had three weeks with time and energy to spare, you could read the entire thing in one go. In the future, when every book is instantly available on the Net, zillions of texts will be downloaded and stored, but not read. The entry on your credit card statement will be the reward, an indication that you have done something 'cultural'.

In the 19th century, the wealthy bourgeois developed an art form out of squandering their time; nowadays, if you're older than a student and younger than a pensioner, you simply have to be seen reading a book. Interpassivity is the ultimate quirk of the upwardly mobile petit-bourgeois, compensation for the guilt of not being an appreciative connoisseur, not being educated, and not being politically aware (how many thick books and drawn-out films, from Das Kapital to Claude Lanzmann's Shoah, are bought but never entirely read or watched?). What else is the average book shelf than a monument to the interpassivity of the educated classes?

Viennese artist Julius Deutschbauer didn't have much trouble finding enough people to contribute books to his Bibliothek ungelesener Bücher (Library of Unread Books, 1997-present); it includes everything from Stalin to Derrida to Allen Carr's The Easy Way To Stop Smoking. Deutschbauer shows that what appears to be the pitiful residue of engagement is so much better than the pseudo-enlightened cynicism of CEOs or politicians boasting that they are just too busy to read. Interpassivity stems from the contradictions of an economy which demands that people always be sociable and functional in a team, while still maintaining a perceptive, introspective, creative side. As interpassivity serves to simulate the latter, it may keep the economy running - barely. But it also contains the potential to turn the tables: the information is there, and, one day, you could stop industriously filing it and start to actually use it. You could - if you really wanted to.