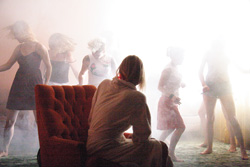 David Lynch, master of resonant absurdity, has never chosen a more eerily appropriate title than that of INLAND EMPIRE (2006). Riddled with shifts between places and levels of reality like wormholes, rabbit holes or web portals, his first digital video feature has been shaped by both the particular qualities of the medium – with which he says he’s ‘fallen in love’ – and his experiments with the Internet as an alternative medium, through his website and idea incubator, DavidLynch.com. He’s currently sharing insights into his working processes not only on the web but also in his recently published book Catching the Big Fish: Meditation, Consciousness, and Creativity (2006), a collection of vignettes about Transcendental Meditation and creative inspiration (Lynch’s perky enthusiasm for Transcendental Meditation comes as a surprise to many, who find it difficult to square with his dark and often horrific visions). And then there are the hundreds of art works – including paintings, digitally altered found erotic photographs, drawings on Post-its, napkins and matchbooks, and interactive sound pieces on view at the Fondation Cartier, Paris in ‘The Air is on Fire’ from 3 March to 27 May 2007.

Writers-turned-directors are a familiar breed, but Lynch is rare in being a major filmmaker who began his career as a painter. Texture crossed with light and movement gets him going. He’s often discussed the revelatory moment when a breeze moved one of his paintings at the Pennsylvania Academy of the Fine Arts – leading to his first foray into cinema, Six Men Getting Sick (Six Times) (1966), a Francis Bacon-esque ‘moving painting’ loop projected onto a sculptured screen to the accompaniment of a wailing siren. With his short films The Alphabet (1968) and The Grandmother (1970), whose characters glow against black-painted interiors, he defined his fascination with the horror and tenderness found in the everyday, as well as his themes of growth, decay and language. But he became a director when he burrowed into the five-year-plus project Eraserhead (1977), above the mouldering horse stables of a California estate. With INLAND EMPIRE his art and cinema draw closer together – his digital video approaches the paintings’ impossible spaces, exaggerated figures, murky tones. It’s replete with distortion: bodies float uncannily from backgrounds, wide-angle close-ups deform faces, darkness bleeds outwards, light burns out detail.

Described as Lynch’s most experimental work since Eraserhead, INLAND EMPIRE is certainly his most intuitive – written scene by scene and shot in bits and pieces. Within the narrative an actress named Nikki Grace (played by Laura Dern) lands a role in On High in Blue Tomorrows, a melodrama based on a Polish folk-tale. She soon finds that the film is cursed and that the leads were murdered during a previous production. Her life enmeshes frighteningly with that of her character, Sue, and she metamorphoses as time folds in on itself. The shadowy web includes a Polish ‘lost girl’ who watches the proceedings on television weeping, rabbit-headed people, a disjunctive laughter track and prostitutes haunting the streets of both Los Angeles and Lódz, Poland. Much recalls Lynch’s earlier work – voyeurism, doppelgängers, worlds nested within worlds, lipsticked mouths stretched across the frame. Yet this desperate spiral, which at times echoes avant-garde ‘trance’ films with their dreaming protagonists and interior journeys, is a radical departure.

‘Every medium is infinitely deep’, Lynch has remarked, and INLAND EMPIRE suggests he’s right. For the production he used a consumer-grade Sony PD-150 camera and became entranced with the grubby texture of the medium and its suggestive withholding of visual information, which evokes for him early cinema. (He knows the virtues of primitive media: in 1995, for a project marking the centennial of cinema’s invention, he made a mysterious 55-second film using a restored cinématographe.) He shot some scenes and liked the look when they were transferred to film, then realized that what he had was not another open-ended Internet project but the makings of a full feature. Shocking many who have appreciated his pristine visuals – consider the shimmering greys and lovingly lit details in Eraserhead and The Elephant Man (1980) or the voluptuously rancid splendour of Blue Velvet (1986) and Mulholland Drive (2001) – he’s since renounced shooting on film. In Catching the Big Fish he writes bluntly: ‘I’m through with film as a medium. For me, film is dead.’ Although he’s produced ravishing images on celluloid, digital video’s lighter cameras and longer takes are perfectly suited to his instinctual working method. No wonder he talks of falling in love.

Light and shadow still electrify him, though. ‘I love seeing people come out of darkness’, he writes, and his chiaroscuro has never been more redolent of early movies. When the spotlit Nikki/Sue throws back her head, she could be channelling Gloria Swanson – or Norma Desmond – as if past and future were pulling her into oblivion. In fact, the weeping ‘lost girl’ reenacts the snippet from the 1929 Swanson film Queen Kelly in Sunset Boulevard (1950). The line ‘Cast out this wicked dream that has seized my heart’, suggests she may represent the souls of ambitious actresses stolen by their dreams. Yet perhaps everything in INLAND EMPIRE, which opens with a haunting shot of a phonograph stylus descending onto spinning vinyl, echoes Mulholland Drive’s Club Silencio: ‘It is all a tape. Il n’y a pas d’orchestre. It is an illusion.’

Dern, as a noir-ish dame delivering a jaded monologue in a windowless room, is the film’s bruised heart. Whoever she is, her time has run out: a screwdriver-wielding enemy of Nikki/Sue awaits her on Hollywood Boulevard. The Walk of Fame, studded with stars honouring once-celestial names such as Dorothy Lamour, becomes a Walk of Death. ‘You dyin’, lady’, a homeless woman observes before continuing a conversation about the bus to Pomona. But is death ever the end for a Lynch protagonist? Here the gore seems a way out of the sea of evil reflections – a means to a creative rebirth, like when Cocteau’s Orpheus passes through a mirror.

DavidLynch.com is yet another world, a Piranesian labyrinth of sooty tones and charming industrial sounds. The site offers subscribers music, animated shorts, serial movies, sketch-like experiments and other odds and ends, some of which made their way into INLAND EMPIRE’s anxious stew. The most unsettling thread in the film – the rabbits – first appeared online. What Lynch calls ‘short ideas’ include a shot of jagged shadows inching across an exterior wall before dusk renders part of his kitchen visible and a video showing him applying yellow plaster to a lamp (he designs personality-filled furniture and fixtures). Before the INLAND EMPIRE promotional tour he even delivered a daily weather report. Most disarming for fans of his work are the videotaped answers to members’ questions, in which he sometimes appears before a red velvet curtain as if in one of his celluloid dream spaces. He also periodically visits the chat rooms.

The city of Lódz promises to become another creative test-site. When Lynch first travelled to the home of the famed Lódz Film School, he was entranced by the distinctive architecture and mood of the ‘Polish Manchester.’ He photographed its abandoned factories and later filmed INLAND EMPIRE’s otherworldly Polish scenes there. Now he’s partnered with Cameraimage film festival director Marek Zydowicz and architect and businessman Andrzej Walczak to found an ambitious arts centre, The Arts of the World, for which the city council has donated a century-old power plant that once serviced textile mills. Plans are also in the pipeline with architect and urban planner Rob Krier, who is involved in a larger urban redevelopment expected to include a museum addressing Lynch’s film, art and ideas, post-production and sound recording facilities, a festival centre, contemporary art and technical museums and various cultural facilities.

INLAND EMPIRE is wildly challenging; a chambered nautilus in a dark sea, it makes Mulholland Drive’s Möbius-strip-like structure feel downright classical. It’s anyone’s guess where Lynch is headed next, although he’s mentioned that the kinds of projects he would previously have tried to get produced for television may find release on the Internet. He’s rethinking distribution in general: he self-distributed INLAND EMPIRE in the US, making personal appearances across the country. (He also lobbied for an Academy Award nomination for Laura Dern by installing himself at what looked like a farm stall with a cow alongside on an L.A. street.) In March the movie was still playing in New York, over two months after it was expected to close after a short run. Interestingly, Lynch’s transition to digital video coincides with that of certain revered filmmakers working in the avant-garde, an arena that not long ago saw adamant resistance to video. Who could have imagined visionary filmmakers would make it seem easy to leave film behind?