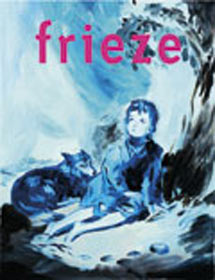 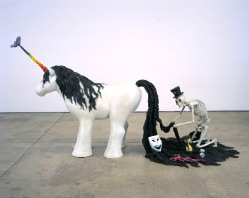 Maybe every country has them, those places where counterculture meets honky tonk, where free-spirited eccentricity and creative self-expression have a decidedly seedy cast. In the States, Key West, Woodstock, Provincetown and Venice, top the list of such end-of-the-road havens, where the seekers of this world find that they can't or won't go any further and think to themselves, 'this must be the place'. I don't know if the LA-based artist Liz Craft had Venice Beach specifically in mind when she was making the sculptures in this show, but something of the derailed optimism and stale extroversion found where the continent dead-ends and Los Angeles offers its lost souls to the Pacific Ocean is to be found here as well.

Many of Craft's sculptures have the look of die-cast metal trinkets - the kind shelved next to the wind chimes and bongs in tacky seaside souvenir and head shops - blown up in scale and recast in bronze. But instead of wizards, gnomes, lighthouses and surf scenes (although there is a unicorn on the premises), Craft's subjects tend towards riffs on the wayward inhabitants of such places or the food stamp realities that make up their environment. This is an America in which the downscale remnants of the 1960s counterculture and the 1970s and '80s 'me' generation have not so much disappeared as melded with 'the great grungy unconsciousness of lower middle-class America', as Robert Crumb once called the shabby, yard sale look of the land.

Consider the beaded curtain: a décor element as essential to hippiedom as wallpaper or starburst wall clocks were to earlier generations, it is now hard to see it as anything other than an embarrassing artefact, a depressingly leaden cliché. Craft's Beaded Curtain (2003) takes the discomfort of sublimated familiarity up a notch by reproducing it at such a jumbo scale as to make it difficult to ignore and almost impossible physically to pass through. Struggling past its stained wooden baubles, you can almost hear the locked groove of some Creedence Clearwater Revival tune endlessly wafting from a nearby hi-fi. Yes, it may be a cultural relic invalidated by the disciples of lifestyle gurus such as Martha Stewart, but it is one demanding that the beholder acknowledge the deep abiding faith in the virtues of mellowness of which it is an emblem.

Against such backdrops optimism doesn't die, it just atrophies, developing its own rituals of kitsch and cults of folksy sentimentality, all of which seem embodied in The Pony (2003), a painted bronze sculptural tableau in which the aforementioned unicorn is found skewering a harmless butterfly on its multicoloured horn while having its tail deftly braided by a dandyish, top-hatted skeleton. This is not a scene you encounter every day, but somehow it's surprisingly easy to accept, being the underbelly of a happy collective daydream. It is as if the idle notebook doodles of a pubescent schoolgirl - all horses drawn in stiff profile, rainbows and daisies - had found a more lasting refuge imagined as a memento mori, a monument to an entrenched and morbid Pollyanna-ism.

Elsewhere a tiny, wan, middle-aged flower child with milk-white skin kneels near the centre of the gallery, looking like a miniature Eve whose flesh has begun to droop and pucker. Despite the painted bronze's title, Young Girl (2003), and her nakedness and the blossoms in her long tresses, it seems she's been living on the commune for too long and has chosen to cut her losses and make her peace with an existence of coupon clipping and bargain hunting while she still can, judging by the overturned plastic milk crate atop which she kneels.

Nearby, an old bearded hippie sits cross-legged in the buff, serenely strumming his acoustic guitar and smoking a pipe. Inside the sound hole of his stringless instrument sits a single peacock feather, the offhand gesture and flash of colour dotting the 'i' on this deadpan ode to a deadhead. The sketchy, heavily modelled bronze surface is the colour of pencil lead, apt since the old geezer truly resembles any number of Crumb or Mad magazine cartoons, or satirical Honoré Daumier or William Hogarth drawings. But instead of the progresses of swaggering 18th-century rakes and harlots, or the self-doubt of 20th-century urban nobodies, we get another cultural type who seems to be doing all right, living a cliché and loving it.

Of course, it takes little effort to snicker at the talismanic mediocrities of people who like to think of themselves as freethinkers and creative types and who maybe let themselves off a bit too easily. The afternoon I stopped by the gallery, most visitors couldn't help cracking up as they wandered from one on-the-money joke - the octogenarian roller-disco queen, the tiny, over-the-hill beach beauty with her 'come hither' stare - to another. But if there is more than a whiff of condescension in Craft's caricatures, the snideness is tempered by a grudging compassion familiar to any fan of Crumb's comics, or the stubbly burlesques of late Philip Guston, or even the Hyperrealist sculptural portraits of Ron Mueck. At her best, Craft offers a related, equally nuanced experience - call it 'misanthropic empathy' - where the uneasy laughter lasts all the way to the nearest mirror.

As tenuous as some of these existences seem, shakier still must be the inner lives of the turd-like blobs that squat directly across from the hippie. Earth-toned fibreglass Mountain Mamas (2003), as Craft titles them, with their slag heap bosoms and morbidly obese derrières, are probably not what John Denver had in mind when he sang wistfully about his West Virginia idyll. And their droopy diarrhoeal forms would likely have overwhelmed even his legendarily upbeat outlook. But they are all that the old dude has got to look at, and he's too busy keeping on keeping on through his golden years to mind.